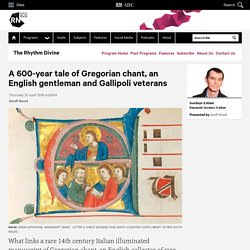 Geoff Wood reveals a remarkable and little-known story 600 years in the making. In 1928 a rare illuminated manuscript of Gregorian chant arrived in Sydney from England. The Rimini Antiphonal, a priceless collection of monastic chants inscribed on vellum, was completed in Rimini in northern Italy in1328 with illustrations by the Italian painter Neri da Rimini, an important 14th century Italian miniaturist. He formed the idea that it would be nice when he died to leave his collection to the Australian people because of the sacrifices that the Australians had made during the war. 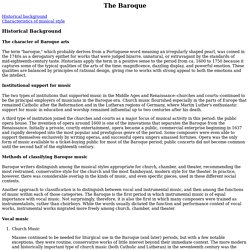 The Music Salon: Four Kinds of Chant. We mostly think of chant, the unaccompanied vocal music of the Roman Catholic Church, as 'Gregorian' chant after Pope Gregory I who played an important role in its formation. 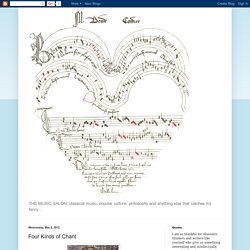 But there are at least three other kinds of chant: the Old Roman chant, the Ambrosian chant and the Mozarabic chant. Chant is the foundation of Western music and why that came to be is rather interesting. Turns out that political considerations were crucial. In the 8th century the pope, Stephen II, had to ask Pepin the Short, King of the Franks, for protection against the Lombards who were threatening Rome. Pepin agreed and this collaboration led in time to an alliance between the Franks, soon to be led by Charlemagne, Pepin's son, and Rome, whose then pope, Leo III, would crown him ruler of the Holy Roman Empire.

The northern Franks practiced the Gallican Rite at the time and this was replaced by Roman liturgical texts and, at first, the melodies used with them. Old Roman, Tecum principium: Periods of Classical Music - Classical Music in the 21st Century. Classical music is broadly divided into 4 main periods: BaroqueClassicalRomanticContemporary Each composer is classified within one of these periods based on the time in which he lived and the characteristics of the music he composed. 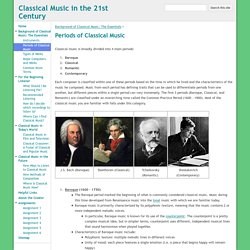 Music from each period has defining traits that can be used to differentiate periods from one another, but different pieces within a single period can vary immensely. The first 3 periods (Baroque, Classical, and Romantic) are classified under an overarching time called the Common Practice Period (1600 - 1900). Stages in the Evolution of Musical Scales and Harmony. S t a g e s in the Evolutionof Melody, Scales & Harmony After 20-30 years of new studies and archeological finds, it is now possible to move the subject of the origin of music out of the realm of mostly theory into a new phase of physical reality. 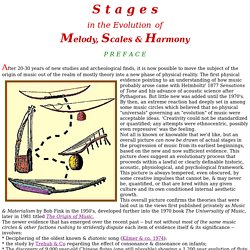 The first physical evidence pointing to an understanding of how music probably arose came with Helmholtz' 1877 Sensations of Tone and his advance of acoustic science after Pythagoras. But little new was added until the 1970's. By then, an extreme reaction had deeply set in among some music circles which believed that no physical "universals" governing an "evolution" of music were acceptable ideas. Chord structure in medieval music. For many musicians, especially those more familiar with other styles, a fundamental early question concerns the chords of medieval music. 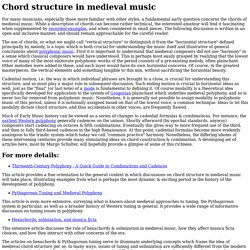 While a description of chords can become rather technical, the interested amateur will find it fascinating when supplemented by recorded examples, and when considered in small pieces. The following discussion is written in an open and inclusive manner, and should remain approachable for the careful reader. The use of chords, or what we might call "vertical structure" to distinguish it from the "horizontal structure" defined principally by melody, is a topic which is both crucial for understanding the music itself and illustrative of general conclusions about polyphonic music.

First it is important to understand that medieval composers did not use "harmony" in a sense which classical composers would have understood. Much of Early Music history can be viewed as a series of changes to cadential formulas & combinations. Thirteenth-Century Polyphony - Table of Contents. 1. 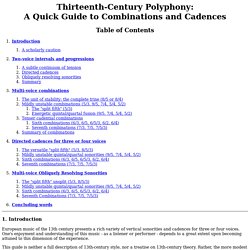 Introduction European music of the 13th century presents a rich variety of vertical sonorities and cadences for three or four voices. One's enjoyment and understanding of this music - as a listener or performer - depends to a great extent upon becoming attuned to this dimension of the experience. Church Music and Hymns - the Church's influence on music development. Although music has no doubt been an important part of life for many cultures since antiquity, it was in the hands of the Western Christian Church that music underwent important developments that were to send it on a series of courses leading ultimately to classical forms and then on to influence today's myriad musical styles. 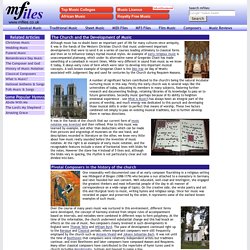 An example of early religious music is unaccompanied plainsong, which under its alternative name of Gregorian Chant has made something of a comeback in recent times. While very different in sound from music as we know it today, it obeys early rules of form which were later to develop into important musical concepts. A well-known example of Gregorian Chant is the Dies Irae (or Day of Wrath) associated with Judgement Day and used for centuries by the Church during Requiem Massess. Composer Timelines for different Classical Music Periods. Musicologists divide the history of classical music into different eras or periods - see our description of the different Classical Music Periods. 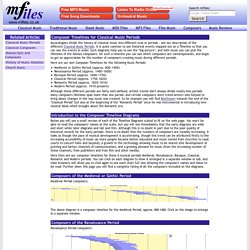 It is quite common to see historical events mapped out on a Timeline so that you can see the events in order. Music Periods - Music Periods. Stages in the Evolution of Musical Scales and Harmony. Fundamentals MajorScales TedGreene 1977 08 17. Basicgregorianchant 1960. Gregorian Chant Notation. This is a description of the traditional Gregorian Chant notation, so that anyone will be able to read the notation and sing it. 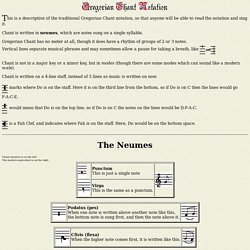 Chant is written in neumes, which are notes sung on a single syllable. Gregorian Chant has no meter at all, though it does have a rhythm of groups of 2 or 3 notes. Vertical lines separate musical phrases and may sometimes allow a pause for taking a breath, like Chant is not in a major key or a minor key, but in modes (though there are some modes which can sound like a modern scale). Chant is written on a 4-line staff, instead of 5 lines as music is written on now. marks where Do is on the staff. Would mean that Do is on the top line, so if Do is on C the notes on the lines would be D-F-A-C. is a Fah Clef, and indicates where Fah is on the staff. Chant notation is on the left.

These are other ways of showing that a note is held: One is by putting a dot (punctum-mora) after the note. Gregorian Chant. Help support New Advent and get the full contents of this website as an instant download. Includes the Catholic Encyclopedia, Church Fathers, Summa, Bible and more — all for only $19.99... The name is often taken as synonymous with plain chant, comprising not only the Church music of the early Middle Ages, but also later compositions (elaborate melodies for the Ordinary of the Mass, sequences, etc.) written in a similar style down to the sixteenth century and even in modern times.

In a stricter sense Gregorian chant means that Roman form of early plain chant as distinguished from the Ambrosian, Gallican, and Mozarabic chants, which were akin to it, but were gradually supplanted by it from the eighth to the eleventh century.