Egypt - After the Coup

Egypt - From polls and Sinai crash 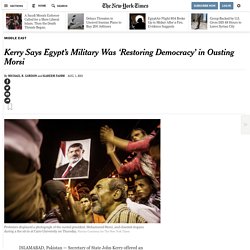 “The military was asked to intervene by millions and millions of people” who feared the country would descend into chaos, Mr. Kerry said during a visit to Pakistan, a country that has seen four military coups since the 1950s. In Egypt, Mr. Egypt prosecutor orders investigation into alleged presidential election fraud. Who let the jihadis out? Towards the end of November, Minister of Interior Mohamed Ibrahim held a press conference “to expose the details of terrorist groups arrested recently by security bodies.” 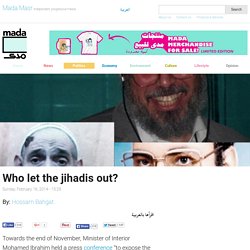 Ibrahim identified a “terrorist focal point” that included 39 terrorists and that was planning a number of attacks on the police, the army, some vital establishments, and churches. The dangerous group, the minister announced, was “led by Nabil Mohamed Abdel Meguid al-Maghrabi, an inmate released during the rule of ousted President Mohamed Morsi.” Maghrabi’s name, alongside those of other suspects, was interesting. Egypt’s Black Cloud: a recurring nightmare? Smoke rises from burning garbage in downtown Cairo October 20, 2011- REUTERS CAIRO: A cloud of thick smoke blankets the Delta area each autumn, leaving the country with reportedly high levels of pollution and serious respiratory diseases. 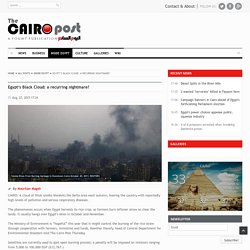 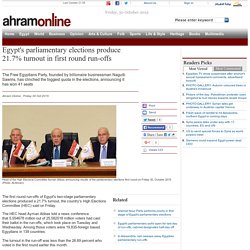 Who Is Running the Egyptian State? For scholars and many journalists, most non-democratic regimes look the same: they are led and designed by autocratic dictators—or sometimes by small cliques—according to the leader’s whims and interests. 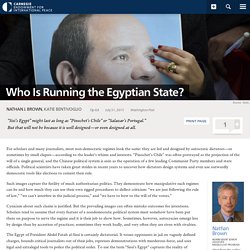 “Pinochet’s Chile” was often portrayed as the projection of the will of a single general, and the Chinese political system is seen as the operation of a few leading Communist Party members and state officials. Political scientists have taken great strides in recent years to uncover how dictators design systems and even use outwardly democratic tools like elections to cement their rule. Why Egypt’s New Parliament Will Be Born Broken. Over the coming weeks, Egyptians will vote in parliamentary elections in which nobody knows who will win yet everybody knows the result. 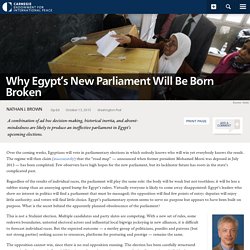 The regime will then claim (inaccurately) that the “road map” — announced when former president Mohamed Morsi was deposed in July 2013 — has been completed. Camp David Accords Fast Facts. The Details of the Camp David Accords:Called for a formal peace treaty to be signed between Israel and Egypt, within three months. 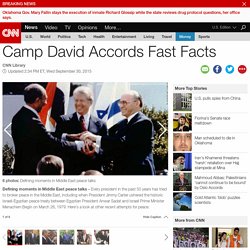 Called for establishment of diplomatic relations between the two countries. Called for Israeli withdrawal from the Sinai Peninsula in stages, to be completed within three years. Called for further meetings to resolve the Palestinian question. The meeting would include Jordan and a representative of the Palestinian people. Called for a five-year transitional period of Israeli withdrawal from the West Bank and Gaza. Called for an end to Israeli settlements in the West Bank. Did not settle the question of East Jerusalem. Timeline:November 9, 1977 - Egyptian President Anwar Sadat announces that he is "ready to go to the Israeli parliament itself" to resolve the Mid East conflict. November 15, 1977 - Through the U.S., Israel formally extends an invitation to Sadat to visit the country.

Egypt’s Next Parliament: A Defining Role for the Business Community and the Salafi Islamists? Parliamentary elections in Egypt are set for next October 18 and 19. 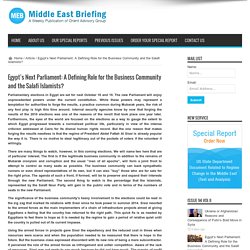 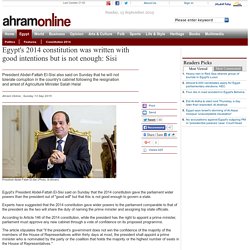 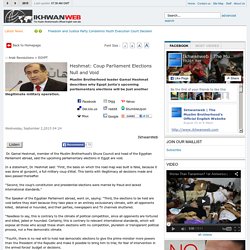 Gamal Heshmat, member of the Muslim Brotherhood's Shura Council and head of the Egyptian Parliament abroad, said the upcoming parliamentary elections in Egypt are void. As group protests escalate, Al-Sisi can expect a hot start to September. Egyptian President Abdel Fattah Al-Sisi A hot start to September awaits Egyptian President Abdel Fattah Al-Sisi, with group protests including a sit-in by police officers, a mass rally by civil servants and a similar rally by members of the Coptic Christian community in one of Cairo’s Cathedrals.

'Worse than a criminal': An Egyptian journalist writes from behind bars. On one of the scorching prison days in the beginning of my detention, while I was walking along the narrow alley that is designated for exercise, on my way back to my cell, a guard called to me, saying: “Come here you criminal”. That was a heavy word to hear. It was so weird that I thought for a moment that he was calling for someone else. I returned to him and explained that the reason I was in prison was my work in the media, and that I was never involved in any crime whatsoever. He looked at me apprehensively and suspiciously, and said: “That's even worse”. April 6's Ahmed Maher on Egypt under Sisi. Ahmed Maher to Huffington Post Arabic: Every Justification Now Exists for a Revolution against Sisi Moataz Shamseddin, Huffington Post Arabi, 29 July 2015 For more than 20 months, Ahmed Maher, the general coordinator of the April 6 Movement, has been locked up in solitary confinement on the charge of violating the protest law.

Despite the possible dangers, he has agreed to answer questions for Huffington Post Arabic and speak about his broken dreams and regrets. Roadside Bomb in Egypt Kills 3, Wounds 27. The two wings of the ‘Caliphate’ ISIS’ activity in Sirte and Sinai is illustrative of a strategy by ISIS to create two centers of power not only to destabilize Libya and Egypt but neighboring countries from West Africa to Saudi Arabia.

These two wings of the caliphate need to be recognized for what they are: A strategic and tactical pincher move to “pop” Egypt and spread ISIS’ deviant ideology across North Africa. ISIS is also looking at the outer edge of the caliphate’s appendages to form the space necessary to send more fighters from the Caliphates core in the Levant to Libya and Egypt. ISIS was displaced in Derna by Majlis Shura Al-Mujahideen which is an al-Qaeda affiliate. Egypt: Three generations of terrorism - Opinion. Terrorism has survived in Egypt for almost two decades.