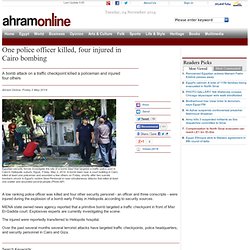 Ansar-Jerusalem-claims-deadly-Egypt-bombing. Staff writer, Al Arabiya News Wednesday, 25 December 2013 Egypt’s so-called Ansar Jerusalem (Ansar Bait al-Maqdis in Arabic) declared responsibility on Tuesday for a deadly attack on a security building in the city of Mansoura that killed 14 people and wounded more than 100 others, Egyptian media reported citing a Twitter statement by the group. 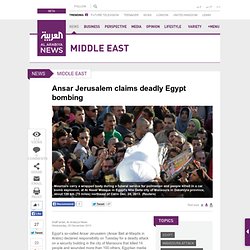 “Dakahlia Security Directorate was attacked and the operation was carried out successfully thanks be to God and to our Jihadist brothers,” Youm7 news website quoted Ansar Jerusalem’s Twitter statement as saying. A car bomb tore through the compound in in one of the deadliest attacks since the army deposed Islamist President Mohammad Mursi in July. 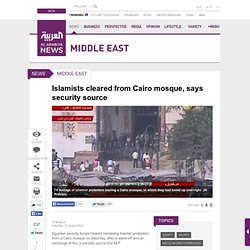 The Fath Mosque, located in Cairo’s central Ramses Square, was besieged by security forces after gunmen fired on them from the building’s minaret, Egypt’s official news agency MENA reported. Local television stations broadcast live footage of soldiers firing assault rifles at the minaret, an Al Arabiya correspondent confirmed that an exchange of gunfire took place. The official MENA news agency quoted security officials as saying that “armed elements” had been shooting at security forces and police from inside the mosque. The mosque served as a field hospital and morgue following Friday’s clashes in the area. Egyptian journalist Shaimaa Awad told The Associated Press that security forces rounded up protesters inside the mosque. (With AFP and The Associated Press) Hollande-Cameron-call-for-strong-European-message-on-Egypt. AFP, CAIRO Friday, 16 August 2013 France and Britain called Friday for Europe to send a strong message on the escalating crisis in Egypt, urging the EU to review its relations with Cairo. 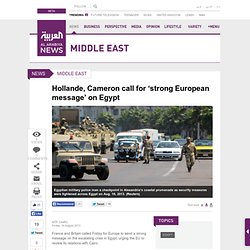 The French presidency said in a statement that after talks by telephone, President Francois Hollande and Prime Minister David Cameron agreed “on the seriousness of the violence of recent days and on the need for a strong European message.” “The end of violence and repression, respect for the human rights of all and the resumption of inter-Egyptian dialogue must be the immediate priority,” the statement said. “The European Union must carry forward these requirements and review its relations with Egypt,” the statement said, adding that the two leaders wanted EU foreign ministers to meet quickly to discuss the situation in Egypt. ‘Biggest protest in Egypt’s history’: LIVE UPDATES. Published time: June 30, 2013 21:38 Edited time: August 30, 2013 21:11 People take part in a protest against the Egyptian government's crackdown on supporters of Egypt's ousted President Mohamed Mursi, near the Egyptian embassy in Jakarta August 19, 2013. 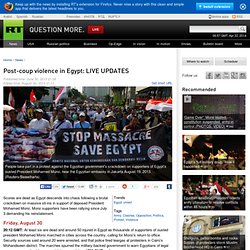 (Reuters/Beawiharta) 'We've Never Seen in Egypt's History This Many Attacks Against Journalists' Two journalists have now been confirmed killed in clashes that erupted last night as the Egyptian military began clearing sit-ins by supporters of ousted President Mohamed Morsy. 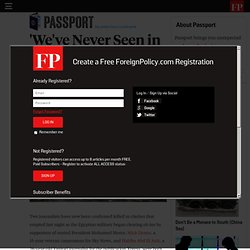 Mick Deane, a 15-year veteran cameraman for Sky News, and Habiba Abd El Aziz, a 26-year-old Emirati journalist for the publication Xpress, were both killed by gunfire. Other journalists in Cairo have been wounded or detained by the military. Erin Cunningham, Middle East editor for GlobalPost, has compiled a series of their tweets, including: Press intimidation is hardly new in Egypt -- it was a staple of the Mubarak regime, and it continued during Egypt's military-led transition, under the Morsy government, and now under the military-backed government of President Adly Mansour, which came to power on July 3. But Sherif Mansour, program coordinator for the Middle East and North Africa at the Committee to Protect Journalists, says it's getting worse. 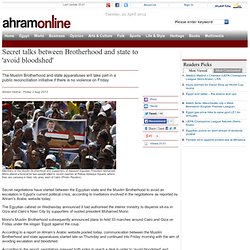 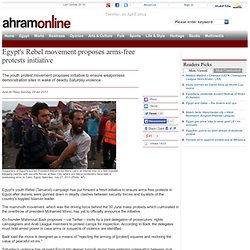 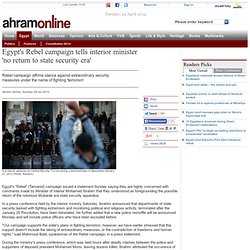 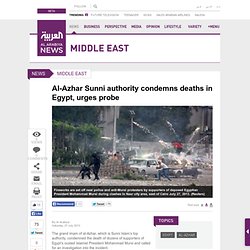 Morsi family accuses Egypt army of 'kidnapping president' Morsi family accuses Egypt army of 'kidnapping president' Ousted president Mohamed Morsi's children accuse army of carrying out 'destructive coup' and their father's kidnapping Sarah El-Rashidi, Monday 22 Jul 2013. Egypt's anti-Morsi coalition for legal decision on deposed President Morsi's detention. Turkish foreign minister holds meeting with Egyptian envoy to Ankara. Aaron_T_Rose : In #Heliopolis, the #army lines... End to Egypt energy crisis prompts questions. Egypt-s-interim-leader-vows-battle-for-security-to-the-end- Al Arabiya Thursday, 18 July 2013 Egypt’s interim President Adly Mansour on Thursday vowed to protect the country from those who “want to drive Egypt to chaos,” in reference to continuous protests by supporters of ousted president Mohammad Mursi. In his first speech to the nation, Mansour said Egypt is going through a decisive stage in its history where some want to drag the country into the “unknown” and cause chaos.

“They want this period to be an introduction to violence and we want it to establish for the concept of protecting lives and reaffirming human rights,” Mansour said. He stressed that his government is committed to realizing security and stability. Mansour's speech comes a day ahead of a massive rally by supporters of Mursi, overthrown in a popular-backed coup two weeks ago. The Friday rallies coincide with the tenth day of Ramadan, which Egyptians celebrate as the day the armed forces crossed the Suez Canal in the 1973 war with Israel. (With Associated Press) A-media-of-violence-and-vulgarity. Egypt-s-young-Brotherhoods-break-away-from-old-leadership-

Al Arabiya Friday, 12 July 2013 Egypt’s Muslim Brotherhood suddenly appears to have begun a phase of disintegration, or renewal as some would argue. More than 500 young Brotherhoods have decided to break away from the group, holding its senior hawkish leaders responsible for what they see as its failure. The young members of the group have established a movement they called “Brotherhood without Violence,” seeking to steer the group back onto a course drawn for it by its founder Hassan al-Banna.

The young Brotherhoods also seek to withdraw confidence from the group’s leadership, primarily its Supreme Guide Mohammad Badei and his powerful deputy Khairat el-Shater. Egyptian Journalist Was Killed by Army Sniper He Filmed, Family Says. An image posted online by the Muslim Brotherhood’s Freedom and Justice Party of Ahmed Assem, 26, a photographer for the Islamist movement’s newspaper who was killed on Monday. As The Lede reported on Monday, one of the most widely viewed images of the clashes in Cairo that morning, which left more than 50 dead, was a harrowing snippet of video that appeared to show an army sniper firing down at Islamist protesters from a rooftop, before turning his gun to take aim at the camera.

Video posted online Monday, said to show an Egyptian soldier firing down at Islamist protesters from a rooftop in Cairo. The photographer was Ahmed Assem, 26, who was brought to a morgue in Cairo later in the day with a bullet hole in his chest. In an interview with a reporter from The Times on Monday, the dead man’s father, Dr. Samer Assem, said that his son had been working for the Brotherhood’s newspaper since the 2011 revolution, against the wishes of his family, who did not share his Islamist politics.