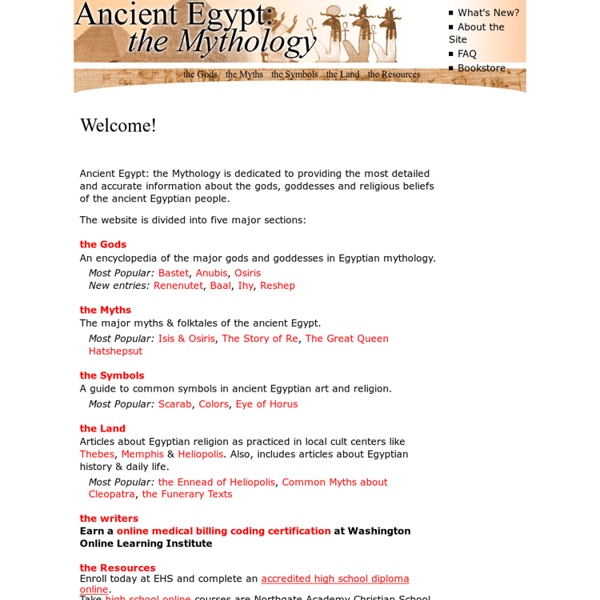 Ancient Egypt: the Mythology is dedicated to providing the most detailed and accurate information about the gods, goddesses and religious beliefs of the ancient Egyptian people. The website is divided into five major sections: the Gods An encyclopedia of the major gods and goddesses in Egyptian mythology. Most Popular: Bastet, Anubis, Osiris New entries: Renenutet, Baal, Ihy, Reshep the Myths

Ancient Egyptian Gods and Goddesses Illustrated Descriptions and stories Egyptian Gods Ancient Egyptian Gods and Goddesses For all ancient people, the world was filled with mystery. Internet Book of Shadows Index This is a large (+9Mb) collection of articles related to Neo-Paganism which can be found archived at a number of FTP sites (for instance, here). This is a collection of posts to bulletin boards from the late eighties to the mid nineties, essentially predating the modern Internet. According to a recent communication, the original editor of this archive was Durwydd mac Tara at PODS net. We acknowledge Durwydd's hard work to preserve this archive. For ease of access, we have converted this archive to HTML using a C program.

type-of-government-egypt-have What Type of Government Does Egypt Have? Egypt is a Northern Africa country bordering four other countries including the Gaza Strip, Israel, Libya, and Sudan. Egypt manages the Sinai Peninsula, the only land connecting Africa and the other parts of the Eastern Hemisphere. The Suez Canal which is a portion of the sea linking the Mediterranean Sea and the Indian Ocean is also controlled by Egypt. The country is formally known as the Arab Republic of Egypt and locally known as the Jumhuriyat Misr al-Arabiyah or just Misr. The country attained independence on February 28, 1922, from Britain as a protectorate.

The Egyptian God Family Tree – Veritable Hokum First: I opened a store! It has a poster of this, as well as updated versions of the Norse and Greek god family trees I did a while back. More to come soon. Next, a disclaimer: this family tree isn’t, strictly speaking, historically accurate, because what we think of as The Egyptian Pantheon is really a whole bunch of similar-but-not-identical pantheons which were mostly based in individual cities – Thebes, Heliopolis, Memphis, etc. – and went through a lot of changes over their 3000+ year history.

The Ancient Egyptian Religion Making a Comeback in the Modern World Ancient Egypt exercises a powerful hold over modern imaginations, conjuring images of gilded pharaohs, towering pyramids, and stunning hieroglyphics. Historians and archaeologists have, over the past two centuries, unearthed countless lost treasures from beneath the Egyptian sands, and we now know much more than we did about this elusive and fascinating civilization. However, some enthusiasts have taken this fascination to an entirely new level. Since the 1980s, an increasing number of people, based in the United States, claim to be following the practices of ancient Egyptian religion. The two ancient Egytps symbolised by the crowns of lotus and papyrus flowers. Kemetism is the name given to modern groups that follow the religious beliefs and rituals associated with ancient Egypt.

The Japanese Climate From subarctic Hokkaidō to subtropical Okinawa, Japan’s climate varies greatly by region. Snow in the North, Blossoms in the South When Hokkaidō in northern Japan is still buried in snow in January, cherry blossoms come into full bloom in the southern islands of Okinawa. Stretching like a bow off the east of the Eurasian continent, the Japanese archipelago shows great climatic variation within its approximately 3,000 kilometers of length from northeast to southwest. It consists of more than 6,800 islands—the four largest are Hokkaidō, Honshū, Shikoku, and Kyūshū—and has around 30,000 kilometers of coastline, which is longer than that for the United States.

The Languages spoken in Japan Japan, often referred to as the State of Japan, is an island nation in the Eastern portion of the Asian continental waters. Located in the expansive Pacific Ocean, the country is situated to the east of the Sea of Japan, China, North Korea, South Korea and Russia, stretching from the Sea of Okhotsk in the north to the East China Sea and Taiwan in the south. The Japanese characters that make up Japan's name mean "sun-origin", which is why Japan is often referred to as the "Land of the Rising Sun. Japan is an archipelago consisting of 6,852 islands. The four largest of these islands, Honshu, Hokkaido, Kyushu, and Shikoku, comprise about ninety-seven percent of Japan's total land area. Japan is home to the world's tenth-largest population, with over 126 million permanent inhabitants.

Religion in Japan Shinto and Buddhism are Japan's two major religions. Shinto is as old as the Japanese culture, while Buddhism was imported from the mainland in the 6th century. Since then, the two religions have been co-existing relatively harmoniously and have even complemented each other to a certain degree. Most Japanese consider themselves Buddhist, Shintoist or both. Religion does not play a big role in the everyday life of most Japanese people today. Languages spoken in Tibet, Tibet Language guide, Languages in Tibet The main language spoken in Tibet is the Tibetan language. Apart from the Tibetan language languages like English is also used in the tourism business and other languages like Hindi and Nepalese are spoken by the Indian and Nepalese merchants. Tibetan language is also spoken in Nepal (in the Nepal-Tibet border areas), Bhutan and India (mainly in Sikkim). This language is classified by the linguists as the member of Tibeto-Burman subgroup of the Sino-Tibetan languages but its origin goes back to the mother language Sanskrit.

The Legal Status of Tibet Recent events in Tibet have intensified the dispute over its legal status. The People's Republic of China (PRC) claims that Tibet is an integral part of China. The Tibetan government-in-exile maintains that Tibet is an independent state under unlawful occupation. The question is highly relevant for at least two reasons. First, if, Tibet is under unlawful Chinese occupation, Beijing's legal-scale transfer of Chinese settlers into Tibet is a serious violation of the fourth Geneva Convention of 1949, which prohibits the transfer of civilian population into occupied territory.

Tibetan Customs, Customs Related to the Ethnic Culture, Religious Factors and Geography Tibet is located a the third pole of the world, with an altitude over 4500 m. Thousands of years, people living on this land created brilliant Tibet culture and customs causing the attention of the world. The Tibetology spring up from 19 to 20 centuries is still in the ascendant now. As we know, the folk customs of nationalities or people living in the same area have long developing history and finally formed a custom system, while culture is the sum of the material wealth and spiritual wealth created during the practice process of the society and history. Folk custom is one of the important society culture phenomenon.