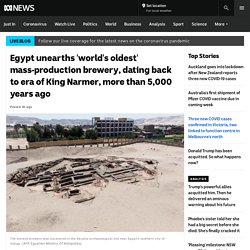 Key points: About 40 ancient pots believed to have made beer were found at North Abydos in SohagThe brewery dates back to the era of King Narmer in 3100 BCArchaeologists believe beer may have been used in "sacrificial rites" Egypt unveils 3,000-year old coffins in latest discovery at Saqqara necropolis south of Cairo. Egypt has unveiled an archaeological discovery at the Saqqara necropolis, south of Cairo, which could "rewrite the history" of the New Kingdom period. 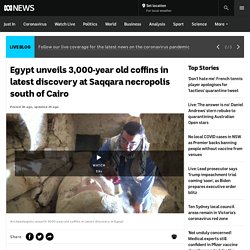 Reuters. Ancient Egyptian coffins, statues dating back 2,500 years found in Saqqara - ABC News. Egyptian antiquities officials have announced the discovery of at least 100 ancient coffins, some with mummies inside, and around 40 gilded statues in a vast Pharaonic necropolis south of Cairo. 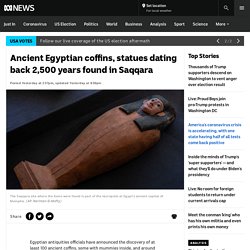 The discovered items date back to the Ptolemaic dynasty (about 320 BC to about 30 BC) and the Late Period (664-332 BC)The Saqqara site is part of the necropolis at Egypt's ancient capital of MemphisSince September, antiquities authorities have revealed at least 140 sealed sarcophagi, with mummies inside most of them Colourful, sealed sarcophagi and statues that were buried more than 2,500 years ago were displayed in a makeshift exhibit at the feet of the famed Step Pyramid of Djoser at Saqqara. Archaeologists opened a coffin with a well-preserved mummy wrapped in cloth inside. They also carried out x-rays visualising the structures of the ancient mummy, showing how the body had been preserved.

He said they would announce another discovery at the Saqqara necropolis later this year. Untitled. Secrets of mummified cats and ancient tablets revealed by imaging technologies - Science News - ABC News. A few years ago, Carla Raymond was approached with a curious request about a cat. 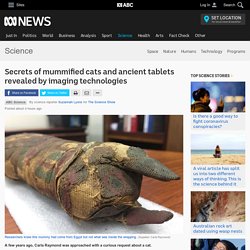 The Macquarie University student was visiting the Australian Institute of Archaeology when Dr Chris Davey asked her to look at a very unusual artefact. "He came to me and he said, 'I have this mummified cat and I'm wondering what we can do to see if it is authentic, if it has anything inside the wrappings, if we can learn anything about it. Do you think you can help me? '," Carla recalled. Egyptian Mummy's 3,000-year-old voice brought back to life by researchers. Posted about 6 hours agoFri 24 Jan 2020, 3:18am Researchers say they have mimicked the voice of a 3,000-year-old mummified Egyptian priest by recreating much of its vocal tract using medical scanners, 3D printing and an electronic larynx. 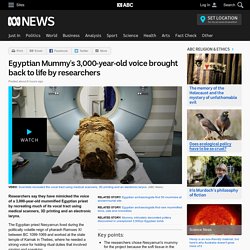 Key points: The researchers chose Nesyamun's mummy for the project because the soft tissue in the throat was reasonably intactThe current voice recreation model is not enough to synthesise whole words or sentencesCo-author John Schofield said the voice sound of the mummy makes history more multidimensional for visitors The Egyptian priest Nesyamun lived during the politically volatile reign of pharaoh Ramses XI between BC 1099-1069 and worked at the state temple of Karnak in Thebes, where he needed a strong voice for holding ritual duties that involved singing and speaking. Mummified lions, cats and crocodiles among unique find unveiled in Egypt. Updated 11 minutes agoSun 24 Nov 2019, 12:25am Egyptian authorities have revealed a rare discovery of animal mummies including two lion cubs as well as several crocodiles, birds and cats. 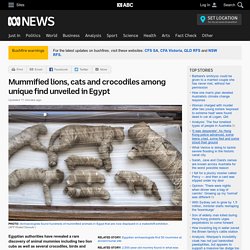 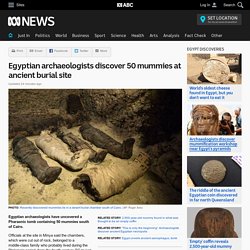 Tutankhamun's tomb restored after years of damage by tourists. Posted yesterday at 4:14amFri 1 Feb 2019, 4:14am A century after the tomb of Tutankhamun was discovered, revealing the mummified boy-king buried more than 3,000 years ago, it has re-opened, brighter and safer thanks to painstaking work to repair damage caused by dust, damp and visitors. 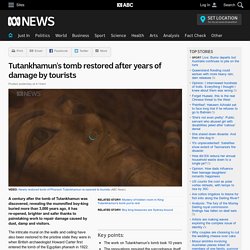 The work on Tutankhamun's tomb took 10 yearsThe renovations required the sarcophagus itself to be moved Water vapour produced by visitors' breathing had damaged the tomb The intricate mural on the walls and ceiling have also been restored to the pristine state they were in when British archaeologist Howard Carter first entered the tomb of the Egyptian pharaoh in 1922. In a process that took 10 years and was delayed by political upheaval in 2011 when protests forced then Egyptian leader Hosni Mubarak from power, wooden flooring, lighting and ramps inside the tomb were all replaced.

That meant Tutankhamun himself had to be moved. "It was terrifying — 12 men, chanting and carrying it up the ramp. Reuters/ABC. Egypt unveils 'one of a kind' ancient tomb with intact colours and statues. Updated about 8 hours agoSat 15 Dec 2018, 3:49pm Egypt unveiled a well-preserved 4,400-year-old tomb decorated with hieroglyphs and statues south of Cairo on Saturday, and officials expect more discoveries when archaeologists excavate the site further in coming months. 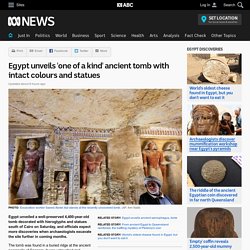 The find is unique because the colour and statues are largely intact after thousands of yearsThe tomb dates from the rule of Neferirkare KakaiMore discoveries are expected as excavations continue. Egypt unveils previously unopened ancient female sarcophagus. Updated about 3 hours agoSun 25 Nov 2018, 4:22am Egyptian authorities have unveiled a well-preserved mummy of a woman inside a previously unopened coffin in Luxor in southern Egypt dating back more than 3,000 years. 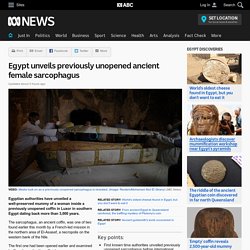 Archaeologists have found cat mummies and painted wooden cobra and crocodile sarcophagiMummified scarabs discovered have been described as "really unique"A newly discovered tomb from the Fifth Dynasty of the Old Kingdom remains sealed. World's oldest cheese confirmed in Egyptian tomb — but it may be filled with a deadly disease. By Lara Lauth Posted 5 minutes agoFri 17 Aug 2018, 9:44am Aged cheeses might have an appeal but a 3,200-year-old sample of the popular dairy product found in Egypt may be just a little too old — and diseased — for even the most dedicated cheese connoisseurs. Key points: Alexander the Great hopes dashed as massive black coffin in Alexandria turns out to contain mummified family. Updated about an hour agoFri 20 Jul 2018, 3:08am Egyptian archaeologists have dashed hopes that a newly-discovered ancient sarcophagus might contain the remains of Alexander the Great, finding instead what appeared to be a mummified family of three swimming in red liquid.

The 30-tonne coffin is the largest yet found in AlexandriaThe location of the remains of Alexander the Great remains a mysteryThe mummies were not in the best condition, only bones remain Workmen found the black granite tomb this month during construction of an apartment building in the historic Mediterranean port city of Alexandria.

The 30-tonne coffin, the largest yet found in Alexandria, prompted a swirl of theories in local and international media that it may be the resting place of the ancient Macedonian ruler, who founded the city that still bears his name in 331 BC. "We found the bones of three people, in what looks like a family burial. Reuters/ABC. Archaeologists discover mummification workshop near Egypt's famed pyramids. Posted Archaeologists in Egypt say they have stumbled upon a new discovery dating back to more than 2,500 years ago near Egypt's famed pyramids at an ancient necropolis south of Cairo. The discovery, which includes a mummification workshop and a shaft used as a communal burial place, is located at the vast Saqqara necropolis part of the Memphis, a UNESCO World Heritage Site.

Ancient Egyptian visitors to Australia or miner's mishap? Riddle of the rainforest coin. Updated 3 Jun 2018, 10:54amSun 3 Jun 2018, 10:54am Unearthed in 1912, squirreled away for a lifetime and then handed in to a museum — the story behind the discovery of an ancient Egyptian coin in far north Queensland is almost as mysterious as how it came to be there. The bronze coin — about the same size as a 50 cent piece — was minted during the reign of Ptolemy IV, between 221 and 204BC. Egyptian mummies, hidden tattoos and the archaeologist who experiments on himself - Science News - ABC News. Archaeologist Renee Freidman couldn't believe her eyes. 2,500-year-old mummy found in what was thought to be an empty Egyptian coffin at Sydney University.