Egypt . Towards the Coup

Egypt's military ousts Morsi, takes control of Cairo - Middle East. Egypt in crisis: army deploys in Cairo streets; Morsi unseen - live updates. Welcome to Middle East Live on what is set to be a crucial day for the future of Egypt. 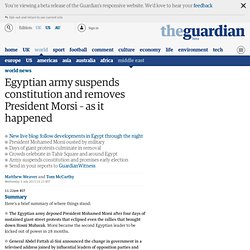 As the army's deadline for resolving the country's political crisis approaches (5pm local time, 3pm GMT) the military leadership and President Mohamed Morsi remain at loggerheads. Egyptian Military Tanks Near Palace - Morsi Aide Sees Coup. Tahrir Square, where tens of thousands of opponents of the government had gathered each night since Sunday to demand Mr. 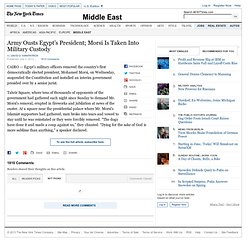 Morsi’s removal, erupted in fireworks and jubilation at news of the ouster. At a square near the presidential palace where Mr. Morsi’s Islamist supporters had gathered, men broke into tears and vowed to stay until he was reinstated or they were forcibly removed. “The dogs have done it and made a coup against us,” they chanted. “Dying for the sake of God is more sublime than anything,” a speaker declared. Mr. Military vehicles and soldiers in riot gear had surrounded the rally in the hours before the takeover, and tensions escalated through the night. By the end of the night, Mr. For Mr. The generals built their case for intervention in a carefully orchestrated series of maneuvers, calling their actions an effort at a “national reconciliation” and refusing to call their takeover a coup. 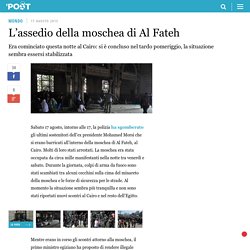 African Union suspends Egypt over president ouster. Erdogan Is Right on Egypt. A poster with the pictures of Egypt's President Mohammed Morsi and Turkey's Prime Minister Recep Tayyip Erdogan (R) is attached to a baby stroller during a pro-Islamist demonstration in Istanbul, July 1, 2013. 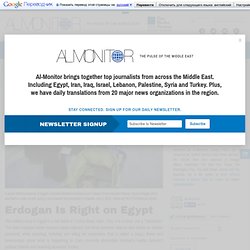 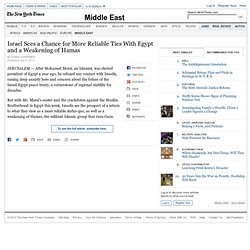 Morsi’s ouster and the crackdown against the Muslim Brotherhood in Egypt this week, Israelis see the prospect of a return to what they view as a more reliable status quo, as well as a weakening of Hamas, the militant Islamic group that runs Gaza. And yet, the good news for Israel remains tempered by the danger of chronic instability next door. Da "fedele" scudiero a boia È l'esercito a dettare la linea. Un anno fa era il suo scudiero. 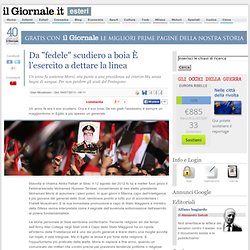 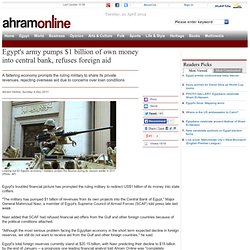 Soldiers protect the Bourse during its closure earlier in 2011 (Photo: AP) Mourning and anger in Egypt. Army Ousts Egypt’s President; Morsi Is Taken Into Military Custody The New York Times. ‘Morsi ousted with US blessing’ — RT Op-Edge. Published time: July 04, 2013 11:24 Egyptian women shout slogans against President Mohammed Morsi as they join hundreds of thousands demonstrating against President Mohammed Morsi and the Muslim brotherhood outside the Egyptian presidential palace on July 3, 2013 in Cairo, Egypt. 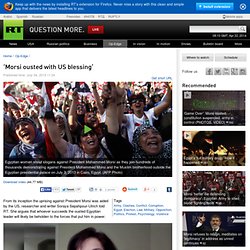 (AFP Photo) From its inception the uprising against President Morsi was aided by the US, researcher and writer Soraya Sepahpour-Ulrich told RT. She argues that whoever succeeds the ousted Egyptian leader will likely be beholden to the forces that put him in power. Egitto, il Paese tra golpe e caos. Ma “l’esercito Spa” non conosce crisi. Egypt coup highlights challenges facing Arab Islamists. Egyptian supporters of the Muslim Brotherhood march in support of ousted president Mohamed Morsi in Cairo on July 5, 2013. 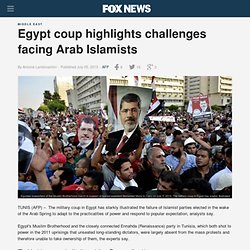 "The Islamists were surprised by the revolutions. Full text: Mohamed El Baradei's report to the UN security council. My report to the Council today is an update on the status of the IAEA's nuclear verification activities in Iraq pursuant to Security Council resolution 1441 and other relevant resolutions. 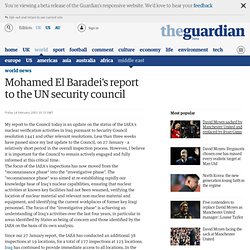 Less than three weeks have passed since my last update to the Council, on 27 January - a relatively short period in the overall inspection process. However, I believe it is important for the Council to remain actively engaged and fully informed at this critical time. The focus of the IAEA's inspections has now moved from the "reconnaissance phase" into the "investigative phase". The "reconnaissance phase" was aimed at re-establishing rapidly our knowledge base of Iraq's nuclear capabilities, ensuring that nuclear activities at known key facilities had not been resumed, verifying the location of nuclear material and relevant non-nuclear material and equipment, and identifying the current workplaces of former key Iraqi personnel.

17 dead, hundreds wounded as post-coup violence erupts in Egypt. A bus passes a destroyed pickup truck with loudspeakers that was used by supporters of ousted Egyptian President Mohamed Morsy on Friday, August 2. The supporters and security forces clashed in Sixth of October City in Giza, south of Cairo, after the government ordered their protest camps be broken up. Jackson Diehl: Egypt’s misguided coup. The Islamic character of Egypt’s ousted government should not obscure the way the country resembles Argentina, Venezuela, Turkey, Thailand and other developing nations in which free elections after decades of autocracy have brought a new elite to power.

The new rulers typically represent previously disenfranchised poor and rural populations, who often don’t share the cultural values of the capital’s middle and upper classes. Once in office, new governments made up almost entirely of novice officials frequently overreach. They battle with the old establishment in the bureaucracy, judiciary and media. The Dark Tunnel. Mahmoud Salem This should be a Happy Story If this revolution had a motto, it would be “Everything you ever wanted, in the worst possible way”.

Conventional wisdom said that if there was ever a revolution against Mubarak, then the Muslim Brotherhood would win. Conventional Wisdom said that if the Islamists ever made it to power they would never leave it, one man one vote one time, and that the country would turn Islamist. Why Sisi Can’t Imitate Nasser’s Model. Protesters cheer with Egyptian flags and a banner of army chief Abdel Fattah al-Sisi, seen between former presidents Gamal Abdel Nasser and Anwar Sadat, as they gather for a mass protest to support the army in front of the presidential palace in Cairo, July 26, 2013.

Qatar on Defense Over Meddling in Egypt. Author: As-Safir (Lebanon) Posted January 10, 2013 The traffic jam that has hit the streets of Cairo and several Egyptian governorates in the past two days following heavy rainfall prompted Twitter and Facebook users to ask sarcastically, "Why didn't Qatar help us remove the water, like it helped helped Egyptian President Mohammed Morsi by granting him $4 billion, which he is bragging about? " Summary⎙ Print Questions are being asked about Qatar’s interests in Egypt’s domestic affairs and Al-Jazeera’s Egyptian programming, writes Mohammad Hisham Abeih. Author Mohammad Hisham Abeih Posted January 10, 2013. The ‘naked truth’ about Egypt’s Brotherhood. Until this week, many observers may have still wondered what kind of rulers the Muslim Brotherhood are in Egypt.