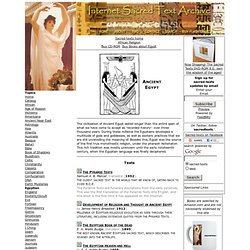 During these millenia the Egyptians developed a multitude of gods and goddesses, as well as esoteric practices that we are still unravelling the meaning of. Besides this, Egypt was the source of the first true monothestic religion, under the pharaoh Akhenaton. This rich tradition was mostly unknown until the early nineteenth century, when the Egyptian language was finally deciphered. 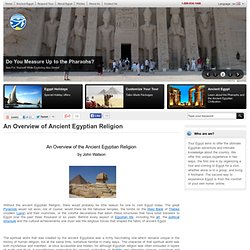 The great Pyramids would not exist, nor of course, would there be the fabulous temples, the tombs on the West Bank of Thebes (modern Luxor) and their mummies, or the colorful decorations that adorn these structures that have lured travelers to Egypt over the past three thousand or so years. Behind every aspect of Egyptian life, including the art, the political structure and the cultural achievements one must see the religious forces that shaped the fabric of ancient Egypt. The spiritual world that was created by the ancient Egyptians was a richly fascinating one which remains unique in the history of human religion, but at the same time, somehow familiar in many ways. One thing that does seem familiar about their ancient religion was that people were very concerned about the afterlife. The Gods Cults Mythology Kingship. Egyptian Religion. Religious Beliefs Creation Myth - The Egyptians created myths to try to explain their place in the cosmosAncient gods - The Pantheon consisted of More than 2000 gods. 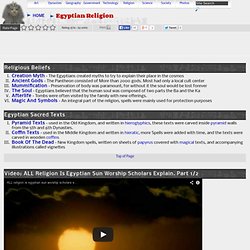 Most had only a local cult centerMummification - Preservation of body was paramount, for without it the soul would be lost foreverThe Soul - Egyptians believed that the human soul was composed of two parts the Ba and the KaAfterlife - Tombs were often visited by the family with new offerings.Magic and Symbols - An integral part of the religion, spells were mainly used for protection purposes Egyptian Sacred Texts Top of Page Video: ALL religion is egyptian sun worship scholars explain. part 1/2 heaven hell demon snakes angels ect sun worship are all egyptian ideas that were adpated by later cults including christianity islam and judasim....

Comparison Between Egyptian Religion and Islam Poll: Which religion do you think is more interesting? Ancient Egyptian Gods - Ancient Egypt for Kids! Weighing the souls of the dead As in the rest of Africa, the people of ancient Egypt were polytheistic throughout the Old Kingdom, the Middle Kingdom, and the New Kingdom. 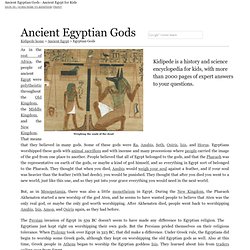 That means that they believed in many gods. Some of these gods were Ra, Anubis, Seth, Osiris, Isis, and Horus. Egyptians worshipped these gods with animal sacrifices and with incense and many processions where people carried the image of the god from one place to another. People believed that all of Egypt belonged to the gods, and that the Pharaoh was the representative on earth of the gods, or maybe a kind of god himself, and so everything in Egypt sort of belonged to the Pharaoh. But, as in Mesopotamia, there was also a little monotheism in Egypt. The Persian invasion of Egypt in 539 BC doesn't seem to have made any difference to Egyptian religion.

But with the coming of Islam to Egypt in the late 600s AD, most Egyptians soon converted from Christianity to Islam. Ancient Egypt - Menu page.