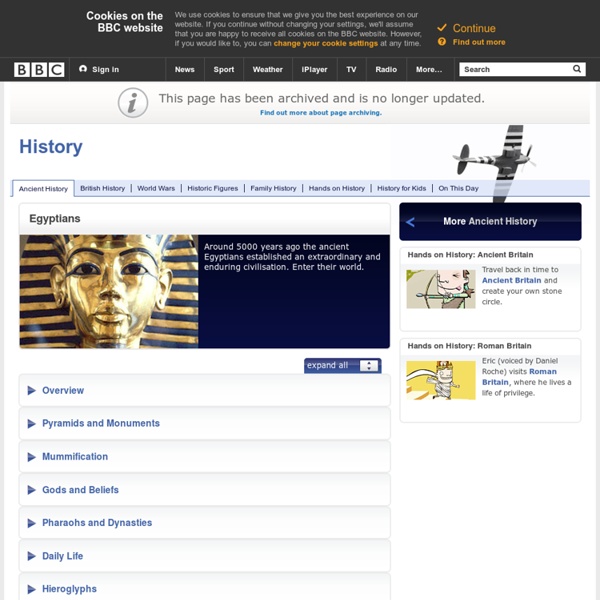 New clues illuminate mysteries of ancient Egyptian portraits WASHINGTON — Scientists are getting a clearer picture of how ancient Egyptians painted lifelike portraits that were buried with mummies of the depicted individuals. These paintings sharply departed from Egyptians’ previous, simpler artworks and were among the first examples of modern Western portraits, archaeologist and materials scientist Marc Walton reported February 14 at the annual meeting of the American Association for the Advancement of Science. The “mummy portraits” date to more than 2,000 years ago, when the Roman Empire controlled Egypt. Three such portraits of Roman-era Egyptians, found more than a century ago at site called Tebtunis, were created by the same artist, said Walton, of Northwestern University in Evanston, Ill.

10 facts about Ancient Egypt! Country fact file: Egypt todayIncredible ancient monuments, scorching deserts and bustling cities – this ancient country is now a sprawling, modern landscape! Read on to learn about the Egypt of today… Egyptian flag OFFICIAL NAME: Arab Republic of EgyptFORM OF GOVERNMENT: RepublicCAPITAL: CairoPOPULATION: 87, 562, 261OFFICIAL LANGUAGE: ArabicMONEY: Egyptian pound, guinayAREA: 1,001,449 square kilometresMAJOR MOUNTAIN RANGES: Eastern HighlandsMAJOR RIVER: NileFLAG: Map of Egypt Egypt: geography and landscape Without the Nile River, all of Egypt would be desert. Only about an 2.5cm of rain falls throughout Egypt each year. But each summer, the Nile river rises because of rains at its source, far to the south in Ethiopia. When this happens, floods cover the river’s valleys, leaving sediments needed for trees, plants and crops to grow.Egypt is often divided into two sections – Upper Egypt in the south and Lower Egypt in the north.

King Tut Revealed By A.R. Williams He was just a teenager when he died. Ancient Egypt: Civilization, Empire & Culture Under Ahmose I, the first king of the 18th dynasty, Egypt was once again reunited. During the 18th dynasty, Egypt restored its control over Nubia and began military campaigns in Palestine, clashing with other powers in the area such as the Mitannians and the Hittites. The country went on to establish the world’s first great empire, stretching from Nubia to the Euphrates River in Asia. In addition to powerful kings such as Amenhotep I (1546-1526 B.C.), Thutmose I (1525-1512 B.C.) and Amenhotep III (1417-1379 B.C.), the New Kingdom was notable for the role of royal women such as Queen Hatshepsut (1503-1482 B.C.), who began ruling as a regent for her young stepson (he later became Thutmose III, Egypt’s greatest military hero), but rose to wield all the powers of a pharaoh. All of the New Kingdom rulers (with the exception of Akhenaton) were laid to rest in deep, rock-cut tombs (not pyramids) in the Valley of the Kings, a burial site on the west bank of the Nile opposite Thebes.

Explore Ancient Egypt Explore Ancient Egypt With 360-degree and other imagery, walk around the Sphinx, enter the Great Pyramid, visit tombs and temples, and more. Want to walk around the Sphinx? Clamber inside the Great Pyramid of Giza and seek out the pharaoh's burial chamber? Ancient Egyptian mummies unearthed after more than 2,600 years SAQQARA, Egypt — More than 2,600 years since they were buried, archaeologists in Egypt said Saturday they had found at least 59 ancient coffins in a vast necropolis south of the country's capital Cairo, one containing the pristine mummy of an ancient priest. The ornate sarcophagi have remained unopened since they were entombed near the famed Step Pyramid of Djoser in Saqqara, according to Egypt's Ministry of Tourism and Antiquities. Footage shared by the ministry showed colorful sarcophagi decorated with ancient Egyptian hieroglyphics.

Ancient Egypt Landmarks of Ancient Egypt A typical Naqada II jar decorated with gazelles. (Predynastic period) Ancient Egypt, or the Kingdom of Kemet, was a society that began about 3150 BC,[1] and lasted until 20 BC when it was invaded by the Roman Empire. Egypt grew along the River Nile and was at its most powerful in the second millennium BC.