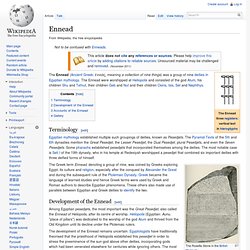 The Pyramid Texts of the 5th and 6th dynasties mention the Great Pesedjet, the Lesser Pesedjet, the Dual Pesedjet, plural Pesedjets, and even the Seven Pesedjets. Some pharaohs established pesedjets that incorporated themselves among the deities. The most notable case is Seti I of the 19th dynasty, who in his temple at Redesiyah worshipped a pesedjet that combined six important deities with three deified forms of himself. Isis Magic : Articles. Homosexuality in Ancient Egypt by Bruce Gerig. Homosexuality in Ancient Egypt HOMOSEXUALITY AND THE BIBLE, Supplement By Bruce L.

Gerig Could a homoerotic romance have occurred in ancient Israel between Jonathan and David, have been known openly, and further have been recorded in that nation’s historical records? To try to answer this question, we now turn to see how homosexuality was more widely perceived in the ancient Near East, including Egypt, Mesopotamia, Anatolia (modern Turkey), and the Aegean. Also, we shall look at what the general social climate was during Israel’s early period, in the books of Judges and 1 Samuel.

Ancient Egypt is a good place to begin, because the nation of Israel was born in Egypt. Yet, studying homosexuality in ancient Egypt is a difficult task. Conflict of Horus and Seth – One famous story in ancient Egypt describes an extended conflict between the god Osiris and Seth, his rival brother, who murders Osiris and then seeks to remove Horus, Osiris’ son and heir, with his claim to be king of the gods. The Egyptian God of Homosexuality - Claiming Our Gay Mythology. Reposted from gayegypt.com: www.gayegypt.com/aneggaygod.html During the pharoanic period Set was god of male homosexuality as well as of individuality.

He was depitcted in different forms - sometimes as a gender-variant male and sometimes as a red or white-skinned man with the head of a dog, the body of a greyhound and a long forked tail. His birthday was celebrated on 16 July. Originally he was, according to legend, given Upper Egypt to rule while his handsome brother [ or sometimes it's said his nephew ] Horus ruled over Lower Egypt. After the reunification the two gods were frequently depicted as a couple with the symbol of unity between them.

According to one myth Set attempts to disgrace Horus by being the active partner in sex with him but on his mother's advice Horus catches Set's semen in his hand and takes it to his mother who puts it on Set's favourite food - lettuce which Set then unknowlingly eats. Set Jizzes On His Enemies. The Love That Dare Not Speak Its Name - Kosu Myth of Horus And Seth. (Credit to its owner) Yesterday I promised to make a post featuring Osiris (Lord of the Dead), the first pharaoh on Earth, as well as his hawk-headed son, Horus (God of Sky). 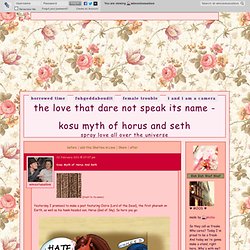 So here you go: The Conflict of Osiris and Seth Long story short, Osiris was a good king that introduced Egyptians civilization. He was also happily married with his sister, Isis (Goddess of Motherhood, Magic and Fertility). His donkey-headed brother, Seth (God of Darkness, Chaos and Desert) was jealous on him so he murdered and dismembered him, even disposed his body parts in different regions of Eygpt. Evetually, his corpse -- excluding his penis which was eaten by fish -- was reassembled by Isis. Strength Level. Order the Isis Spell Isis Spell ($200) Isis Spell Description The right choice for easy cases with no obstacles. 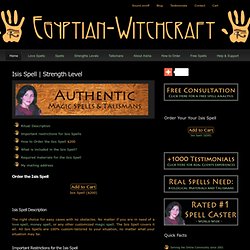 Mysteries of the Temple of Set (Inner Teachings of the Left Hand Path): Don Webb: 9781885972279: Amazon.com. Xeper: The Eternal Word of Set. I am the Magus of the Word Xeper (pronounced Khefer), an English language coinage expressing an Egyptian verb written as a stylized scarab and meaning "I Have Come Into Being. 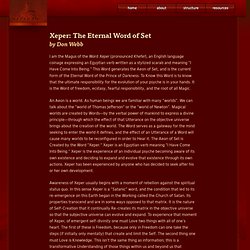 " Ancient Egyptian scripts (hieroglyphs, hieratic and demotic) Origins of Egyptian Hieroglyphs The ancient Egyptians believed that writing was invented by the god Thoth and called their hieroglyphic script "mdju netjer" ("words of the gods"). 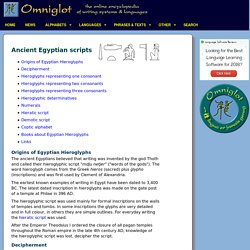 The word hieroglyph comes from the Greek hieros (sacred) plus glypho (inscriptions) and was first used by Clement of Alexandria. The earliest known examples of writing in Egypt have been dated to 3,400 BC. The latest dated inscription in hieroglyphs was made on the gate post of a temple at Philae in 396 AD. Www.well.com/~aquarius/egypt.htm. The notion of gender complexity is deeply rooted in ancient Egyptian culture. 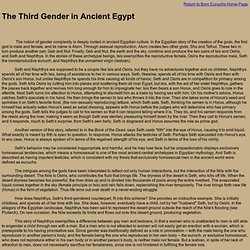 In the Egyptian story of the creation of the gods, the first god is male and female, and its name is Atum. Through asexual reproduction, Atum creates two other gods, Shu and Tefnut. These two in turn produce another pair, Geb and Nut.