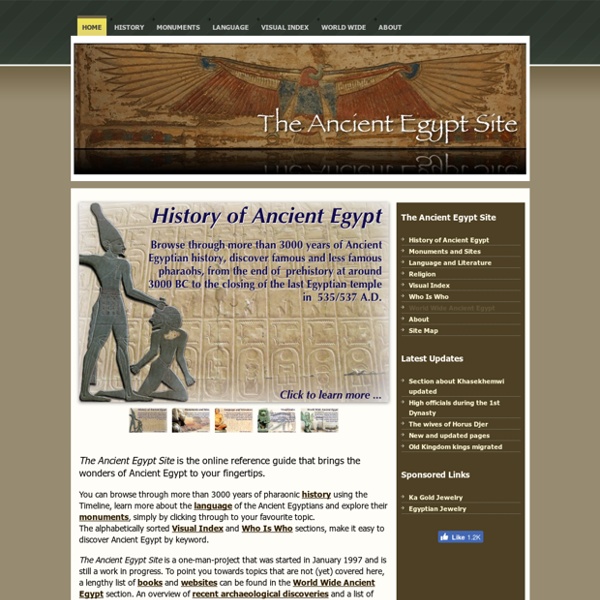 the Myths It is a universal truth that the myths of all cultures are the attempts of people to explain the world in which they live. So too, are the myths of ancient Egypt. Within the great epic myths are explained many smaller mysteries of life along the Nile. Egyptian Symbols and Definitions Djed It is believed that the Djed is a rendering of a human backbone. It represents stability and strength. It was originally associated with the creation god Ptah. Himself being called the "Noble Djed".

World Art Treasures: Egypt Egypt The genesis of our spirit stretches from the first palettes carved in shale nearly five thousand years ago to the mural paintings with which the Copts covered the bas-reliefs of the temples of yore. Slide Library Tell El-Amarna, Capital of the Disk Roman Portraits from Egypt The Story of India - For Teachers (Vedic Period, 15th – 5th Centuries BCE) Objectives Understand the foundation of Hinduism. Consider and examine the ancient texts that defined Hinduism. Develop an overarching understand of the complexity of Hinduism and its early development. Real life experiments that reveal the ancient art and techniques of building Egyptian pyramids Copyright © 2006 by Mike Molyneaux New insights into ancient pyramid construction techniques presented in this article include the following:- [1] The use of battering rams to create acoustic energy for quarrying, shifting and positioning stones. [2] The use of counter-ramps with counter-weight principles for hauling massive stones uphill. [3] The use of overlapping planks and rollers to create an auto-aligning, auto-braking system for the ramps. [4] The use of leveraging towers with counter-weights for lifting stones out of a quarry and onto rollers. [5] Submerging large stones in watery mud for transporting them down rivers or along canals. [6] Partially completed courses of the pyramid forming a spiral staircase to support a ramp to the inner chambers. 1 Actual experiments using scale models A new, realistic set of trials and experiments using scale models or children have now revealed how easily large stones can be transported with rather primitive technology.

Hindu American Foundation (HAF) Hindu Americans comprise one of the fastest growing populations in the United States. Of the 1 billion Hindus worldwide, the Hindu American population currently numbers around 2 million, but this does not include the estimated 32 million others who derive inspiration from Hindu spirituality and practice Hindu teachings such as yoga and meditation. With growing numbers comes an increasing awareness of a place in American dialogue and the need for the accurate portrayal of the faith in line with its beliefs and practices. The Hindu American Foundation (HAF) presents herein, more short answers to common questions about Hinduism. This booklet is an expansion of the original Short Answers booklet, found below. Cracking the Hieroglyphic Code" The earliest attempt at translating hieroglyphics came well before the discovery of the Rosetta Stone. A fifth-century scholar named Horapollo set up a translation system based on hieroglyphics' relation to Egyptian allegories. After Horapollo's hypothesis, 15 centuries of scholars dedicated themselves to a false translation system. De Sacy, who had translated the Demotic portion, tried his hand at the hieroglyphic inscription, but he failed, too. Thomas Young made a significant breakthrough in 1814 when he discovered the meaning of a cartouche [source: BBC]. A cartouche is an oval-shaped loop that encloses a series of hieroglyphic characters.