Horrible Histories - Egyptian Gods and The Devourer. Ancient Egyptian Art Lesson - Drawing a Figure. Our portrait is based upon a painting of Queen Nefertari from her tomb in the Valley of the Queens. Queen Nefertari is usually shown wearing the Royal Vulture Crown of the goddess Nekhbet, the protector of Upper Egypt. Nefertari was the favourite wife of the greatest of all the pharaohs, Rameses II, and she bore him at least six children. She probably died after his 30th year on the throne, about 12 centuries before the birth of Christ. The artistic process used to create the time-worn effect of this Ancient Egyptian portrait is a mixed media technique called Paper Batik.

In this lesson we will guide you through this technique from the initial drawing to the completed portrait explaining each step of the process as we go. You can click on the link or sketch above for a larger image to help with your drawing of an Ancient Egyptian head. A traditional Egyptian image shows the head and lower body viewed from the side, with the eye and upper body viewed from the front. Ancient Egypt - Primary. Egyptians. Egyptian Tomb Adventure Looking for a new challenge? 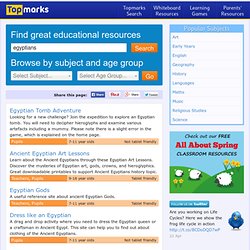 Mark Millmore's Ancient Egyptian Page Subjects covered include Pyramids and Temples, Kings and Queens, hieroglyphic writing and Egyptian mathematics. You Wouldn't Want to be an Egyptian Mummy! Disgusting things you would rather not know about Egyptian mummies. Dress like an Egyptian. Clothing - Ancient Egypt. The ancient Egyptians wore light clothes made from linen. 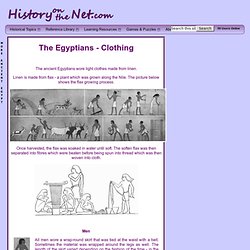 Linen is made from flax - a plant which was grown along the Nile. The picture below shows the flax growing process. Once harvested, the flax was soaked in water until soft. The soften flax was then separated into fibres which were beaten before being spun into thread which was then woven into cloth. Men All men wore a wrap-round skirt that was tied at the waist with a belt. Rich Egyptian men were able to afford the best quality linen which was very fine and almost see-through. Women Egyptian women wore full length straight dresses with one or two shoulder straps.

Children Ancient Egyptian children did not wear clothes until they were about six years old when they would wear the same clothes as men and women. Footwear The Ancient Egyptians went barefoot most of the time but wore sandals for special occasions or if their feet were likely to get hurt. The picture (left) shows the various styles of sandals worn. Jewellery Make up Activities. Minecraft- Ancient Egyptian City. Discovery of an Intact Tomb at Saqqara (ft. Dr. Hawass) 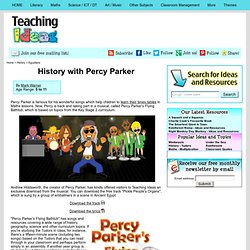 Now, Percy is back and taking part in a musical, called Percy Parker's Flying Bathtub, which is based on topics from the Key Stage 2 curriculum. Andrew Holdsworth, the creator of Percy Parker, has kindly offered visitors to Teaching Ideas an exclusive download from the musical. You can download the free track "Pickle People's Organs", which is sung by a group of embalmers in a scene in Ancient Egypt. Download the track Download the lyrics "Percy Parker's Flying Bathtub" has songs and resources covering a wide range of history, geography, science and other curriculum topics. Download some sample songs and sample resources You can pick and mix scenes based on a variety of topics, such as the Ancient Egyptians, the Romans in Britain, the Fire of London, World War II, and Diet and Digestion.