» Listen to the Radio Show Archive Alex Jones. Simon Peter versus Simon the Sorcerer. This is a great expose by the late Dr. 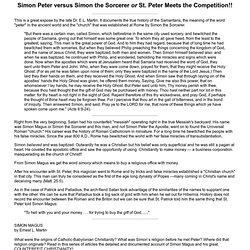 E.L. Martin. It documents the true history of the Samaritans, the meaning of the word "peter" in the ancient world and the "church" that was established at Rome by Simon the Sorcerer. "But there was a certain man, called Simon, which beforetime in the same city used sorcery, and bewitched the people of Samaria, giving out that himself was some great one: To whom they all gave heed, from the least to the greatest, saying, This man is the great power of God. And to him they had regard, because that of long time he had bewitched them with sorceries.

Right from the very beginning, Satan had his counterfeit "messiah" operating right in the true Messiah's backyard. Lindsey Williams. The Difference between Aliens, Demons and Fallen Angels. Tracing Your Roots. R-4. Wadi Hammamat near the Red Sea in Egypt. The first modern mention we have of Wadi Hammamat was by Scot, James Bruce who traveled through the Wadi in 1769. 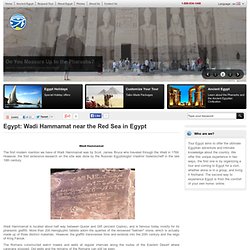 However, the first extensive research on the site was done by the Russian Egyptologist Vladimir Golenischeff in the late 19th century. Wadi Hammamat is located about half way between Qusier and Gift (ancient Coptos), and is famous today mostly for its pharaonic graffiti. More than 200 hieroglyphic tablets adorn the quarries of the renowned "bekhen" stone, which is actually made up of three distinct materials. Shimon Schocken's rides of hope. Profile on TED.com. Seeds of Peace. Seeds of Peace. Israel's Silicon Wadi. Avishai Abrahami sits on the rooftop patio of his five-year-old Web company, Wix.com, contemplating the scene below.

The Mediterranean Sea gleams in the late afternoon sun, shedding rays on the wooden planks of the uber-popular Namal boardwalk at the Tel Aviv port on the city’s north end. As he reaches into the well-stocked ice cream chest for two chocolate popsicles, a programmer pulls a beer from the fridge while a kitchen staffer lays out trays of fresh melon, dates and mango for the 7 p.m. round of fruit shakes. “It’s a little early for beers,” says Abrahami with a smile (since office hours go until 8 or 9 p.m.). “But he’s been working hard.” In his jeans, T-shirt and flip-flops, the 40-year-old Abrahami appears completely relaxed. The approach seems to work. Abrahami fits right into the city’s tech scene, where some 600 early-stage companies have set up shop far from the suburban business parks and glass towers that typified Israel’s earlier round of successes.

Trekking in upper Wadi Quelt: from monasteries to waterfalls. This time, unlike the lower Quelt winter route, we will hike from its sources (Ein Farrah) to the middle of the canyon, the monastery of Saint George with the visit of the Lavra, see its sole occupant, monk Chariton, a swim in the sources of the gorge that do not dry out even in the summer, and in the water will go down to the monastery of Saint George. 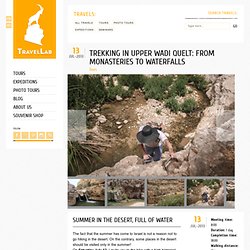 It’s a great route for lovers of desert landscapes, water, and, of course, the history of the Judean desert. During this tour you will understand what attracted the early Christians in the Judean desert, learn how hermits live in the 21st century and enjoy the beautiful scenery. Prat gorge stretches from Jerusalem to Jericho itself, and has been known since Biblical times. Egypt in Canaan - Canaan & Ancient Israel @ University of Pennsylvania Museum of Archaeology and Anthropology.

Brick Making in Egypt" Earthshots: Satellite Images of Environmental Change. Snow closes roads in Israel, is a source of wonder in Egypt. CAIRO -- Snow coated domes and minarets Friday as a record Middle East storm compounded the suffering of Syrian refugees, sent the Israeli army scrambling to dig out stranded motorists and gave Egyptians a rare glimpse of snow in their capital. 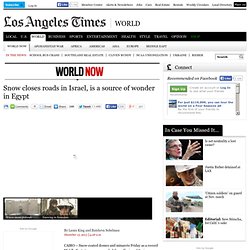 Nearly three feet of snow closed roads in and out of Jerusalem, which is set in high hills, and thousands in and around the city were left without power. Israeli soldiers and police rescued hundreds trapped in their cars by snow and ice.