Sekhmet. Complete Frequency Chart of Musical Notes (Dec. 28, 2007) Egyptian Reiki. Seshat. Seshat, The Scribe Seshat is the feminine consort/counterpart/wife/child of Thoth the Scribe, he who wrote the story/program of humanity's journey through time. 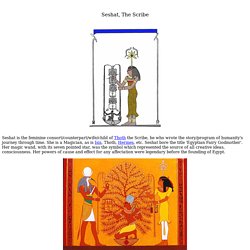 She is a Magician, as is Isis, Thoth, Hermes, etc. Seshat bore the title 'Egyptian Fairy Godmother'. Her magic wand, with its seven pointed star, was the symbol which represented the source of all creative ideas, consciousness. Her powers of cause and effect for any affectation were legendary before the founding of Egypt. Sekhem Course. Egyptian. Entering the Halls of Amenti. Rejoice... the Halls of Amenti are now open again to Seekers and those on the path of Ascension! 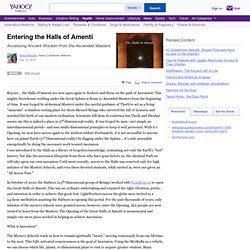 This mighty Storehouse residing under the Great Sphinx is home to Ascended Masters from the beginning of time. It was forged by alchemical Masters under the careful guidance of Thoth to act as a living "museum" -a timeless resting place for those Blessed Beings who survived the fall of Lemuria and watched the birth of our modern civilization. Scientists will deny its existence but Thoth and Sheshat assure me this is indeed a place in 3rd dimensional reality. It was forged by man --not simply an interdimensional portal-- and uses multi-dimensional principles to keep it well protected. With it's Opening, we now have access again to the wisdom within! The Halls of Amenti. Gods of Ancient Egypt: Sekhmet.