Egypt - From polls and Sinai crash 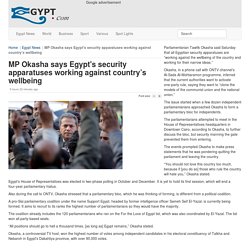 Sisi to issue three decrees before Egypt's new parliament plunges into business Egypt Elections 2015 Egypt Ahram Online. The graveyard: An inside look into Alaqrab Prison. Picture: Satellite Picture for Alaqrab Prison via Google Maps On Thursday December 10th 2015, one of my friends responsible for human rights situation inside Egypt sent me an alarming message describing the violations occurred in the Egyptian infamous Aqrab (Scorpion) prison. 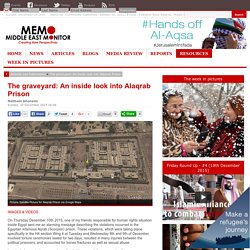 These violations, which were taking place specifically in the H4 section Wing 4 at Tuesday and Wednesday 8th and 9th of December, involved torture ceremonies lasted for two days, resulted in many injuries between the political prisoners, and accounted for bones fractures as well as sexual abuse. Egypt: Eight Parties Join 'Coalition to Support Egypt' Founded By Ex-Military Intelligence General. CAIRO, Dec. 17 (Aswat Masriya) - Eight parties, including al-Wafd, joined the Coalition to Support Egypt, said ex-military intelligence general and coalition founder Sameh Seif Alyazal in a press conference on Friday. 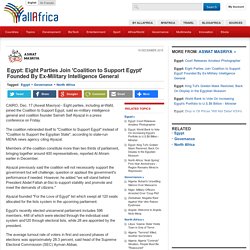 The coalition rebranded itself to "Coalition to Support Egypt" instead of "Coalition to Support the Egyptian State", according to state-run MENA news agency citing Alyazal. Members of the coalition constitute more than two thirds of parliament, bringing together around 400 representatives, reported Al Ahram earlier in December. Alyazal previously said the coalition will not necessarily support the government but will challenge, question or applaud the government's performance if needed. However, he added "we will stand behind President Abdel Fattah al-Sisi to support stability and promote and meet the demands of citizens. " Internal conflict in Egypt's Muslim Brotherhood waged online. As the Muslim Brotherhood began to legally challenge a British government report about the group's connections with radicalism which was released this week, the group's branch in Egypt seems to be suffering from an internal crisis which was largely conducted via social media. 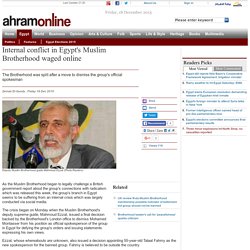 The crisis began on Monday when the Muslim Brotherhood's deputy supreme guide, Mahmoud Ezzat, issued a final decision backed by the Brotherhood's London office to dismiss Mohamed Montasser from his position as official spokesperson of the group in Egypt for defying the group's orders and issuing statements expressing his own views. Ezzat, whose whereabouts are unknown, also issued a decision appointing 55-year-old Talaat Fahmy as the new spokesperson for the banned group. Fahmy is believed to be outside the country. Montasser was appointed official spokesperson of the Muslim Brotherhood in January 2015. Egypt’s New Parliament—Posturing Without Politics. Judging from the number of times they have been summoned to the polls in recent years, Egyptians would seem to have an enthusiastically democratic system. 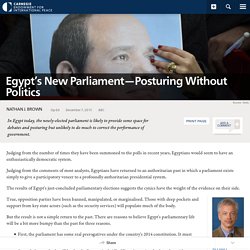 Judging from the comments of most analysts, Egyptians have returned to an authoritarian past in which a parliament exists simply to give a participatory veneer to a profoundly authoritarian presidential system. The results of Egypt's just-concluded parliamentary elections suggests the cynics have the weight of the evidence on their side. True, opposition parties have been banned, manipulated, or marginalised. Those with deep pockets and support from key state actors (such as the security services) will populate much of the body. Political opponents call on Egyptians to topple Sisi regime. 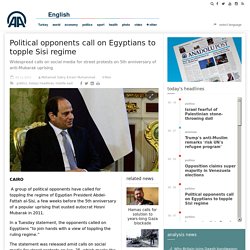 Viewpoint: Egypt's new parliament - posturing without politics. Image copyright Reuters Judging from the number of times they have been summoned to the polls in recent years, Egyptians would seem to have an enthusiastically democratic system. 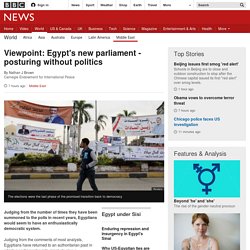 Judging from the comments of most analysts, Egyptians have returned to an authoritarian past in which a parliament exists simply to give a participatory veneer to a profoundly authoritarian presidential system. The results of Egypt's just-concluded parliamentary elections suggests the cynics have the weight of the evidence on their side. True, opposition parties have been banned, manipulated, or marginalised. After deaths, Egyptians grow bolder in challenging police abuse. Fathia Hashem was preparing for bed when Egyptian plainclothes police burst into her house, forced her into a van and ordered her to lead them to her son Amr Abushanab's apartment. 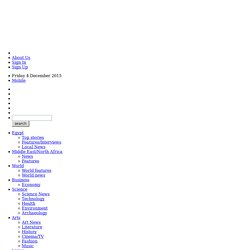 Three days later, she watched police escort him to be questioned by prosecutors. Two officers held him up as he struggled to walk, his face pale and his vest stained with blood. He told her he had been beaten and subjected to electric shocks. Within hours he was dead. Egypt Parliamentary Poll Expected to Bolster Sissi. Egypt wrapped up its parliamentary election Wednesday, and results are expected to show a win for supporters of President Abdel Fattah el-Sissi. 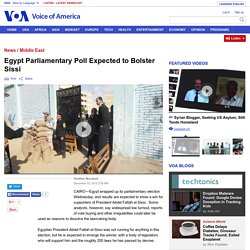 Some analysts, however, say widespread low turnout, reports of vote buying and other irregularities could later be used as reasons to dissolve the lawmaking body. Egyptian President Abdel Fattah el-Sissi was not running for anything in this election, but he is expected to emerge the winner, with a body of legislators who will support him and the roughly 200 laws he has passed by decree. Despite low turnout, election workers say they are excited because the country has been without a parliament for about three years. “I love my homeland. I love Egypt. Egyptian women search for a name on a voting list at a polling station in Cairo, Egypt, Dec. 1, 2015. 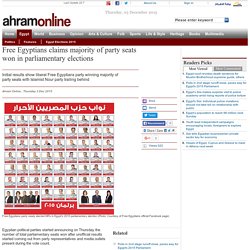 The runoffs of the second phase of the parliamentary elections concluded at 9pm Cairo local time (CLT), signaling an end to Egypt’s four-year parliamentary hiatus. Official results will be announced on Friday. The liberal Free Egyptians party, owned by business and media tycoon Naguib Sawiris, appears to have secured the majority of party seats with a total of 65 winning candidates. Mostaqbal Watan (future of a nation) party said they won a total of 50 parliamentary seats in the two election phases.

The citizens living abroad are casting their ballots at 139 embassies and consulates. Voting is a key counter-terrorism measure: Election observers. Voting in elections is one way of fighting terrorism, according to members of the joint international-local mission to observe Egypt’s parliamentary elections. The observer mission, which is hosted by Maat Foundation for Peace, Development and Human Rights, includes about 150 foreign observers from some 38 countries. Other participants in the observer mission include the Global Network for Rights and Development (GNRD), the International Institute for Peace, Justice and Human Rights (IIPJHR), and the Common Market for Eastern and Southern Africa (COMESA).

Egypt Enters the Danger Zone. It is probably ironic that any return of the Muslim Brotherhood (MB) to the political theatre in Egypt would be the result of the actions of nobody other than the regime of President Abdel Fattah Al Sissi. The fall of former President Mohamed Morsi, which was triggered by massive public protests in June 2014, spread a typical Egyptian joke: In 50 years, Presidents Nasser, Sadat and Mubarak tried in vain to defeat the MB, it took Morsi only one year to do it. However, the joke seems to have a second unexpected episode. Elisa Campioni - Certo si avvicina la caduta del cassiere... ANALYSIS: Are we entering the final days of Sisi’s rule in Egypt? President Abdel Fattah al-Sisi leaves in a car after arriving at Indira Gandhi International Airport (AFP) After a series of crises over the past few weeks, Egyptian President Abdel-Fattah al-Sisi’s government has come under deep domestic and international criticism for repression and inadequacy.

As widespread flooding in Alexandria has brought pressure upon Sisi domestically, his government has drawn global condemnation for its repression of journalists, so soon after his visit to the UK. At the same time, and only a few weeks after a group of eight Mexican tourists were killed in the Egyptian desert, a Russian plane crashed in Sharm el-Sheikh killing all 224 passengers on board. The incident, suspected to be the result of a terrorist act, has raised questions about Egypt’s ability to maintain domestic security and provide the West a dependable regional partner. In Egypt, angry talk of Western conspiracy over plane crash. CAIRO — Egyptian media have reacted with fury as Britain and the United States increasingly point to a bomb as the cause of the Oct. 31 Russian plane crash in Sinai, with many outlets hammering home the same message: Egypt is facing a Western conspiracy that seeks to scare off tourists and destroy the country’s economy.

The warnings of a plot have been widely promoted by opinion-makers in print, online, and on TV, sometimes hinting and sometimes saying flat-out that the West has restricted flights to Egypt not purely out of safety concerns for its citizens but because it wants to undermine the country or prevent President Abdel-Fattah el-Sissi from making Egypt too strong. And though they seem wild, these conspiracy theories have apparently tapped into the Egyptian mindset — so much so that when Russia last Friday grounded all flights to Egypt, some media speculated that Moscow had fallen victim to British pressure and manipulation.

UN Egyptian delegation responds to EU human rights report. By Sarah El-Sheikh The Egyptian delegation in the United Nations published a response statement rejecting the report released by the European Union about human right conditions in Egypt, according to Ministry of Foreign Affair’s statement. Egypt’s permanent representative in the UN Amr Aboul Atta responded to the EU report by saying Egypt respects the law as it confronts terrorism and it guarantees individuals their rights in protesting and establishing human right organisations, in accordance with Articles 73 and 74 of the Egyptian constitution. Aboul Atta said the number of non-governmental organisations (NGOs) increased from 26,000 to 47,000 during the past five years.

Nour Party, Egypt's political Islam sole survivor, left with dim election hopes. Businessinsider. Political parties 'buying popular candidates' ahead of parliamentary elections: report. “Political parties are buying popular candidates to succeed in parliamentary elections, after failing to foster public support in the few years that followed the revolution of 25 January 2011,” suggested a new study by the Regional Center for Strategic Studies. Parliamentary Elections Update: The Week in Review. October 15, 2015. Sissi and Apathy Rule as Eyptians Go to Polling Booths - Middle East - Israel News - Haaretz Israeli News Source. Sisi in London: What to Expect. November 4, 2015 Photo: Egypt Presidency From November 4 to 6, Egypt’s President Abdel Fattah al-Sisi will be in the UK on an official visit. It marks the first trip to London by an Egyptian president since the January 25 revolutionary uprising in 2011.

The trip raises a number of questions around Western engagement with Egypt under Sisi, particularly from one of Europe’s most powerful nations, the United Kingdom. ما بعد سقوط السيسي؟؟ Egyptian Election 2015: Low Turnout And Voter Indifference Makes Victory For President El-Sisi Inevitable.