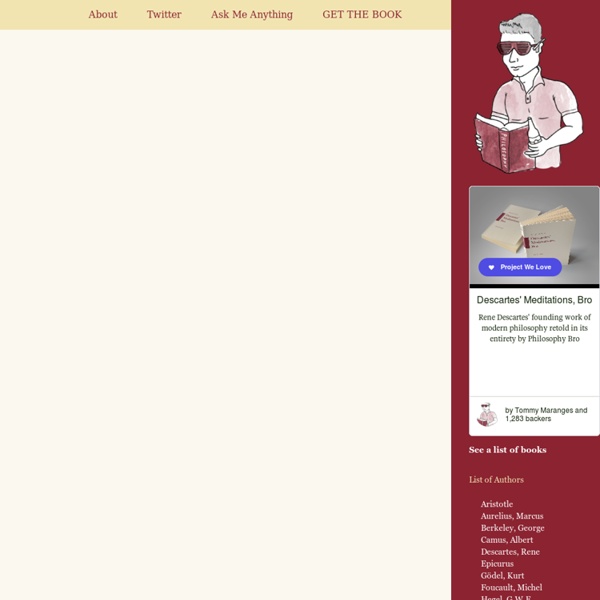 Sequences A sequence is a series of multiple posts on Less Wrong on the same topic, to coherently and fully explore a particular thesis. Reading the sequences is the most systematic way to approach the Less Wrong archives. If you'd like an abridged index of the sequences, try XiXiDu's guide, or Academian's guide targeted at people who already have a science background. Benito's Guide aims to systematically fill the reader in on the most important ideas discussed on LessWrong (not just in the sequences). It also begins with a series of videos, which are a friendly introduction, and useful if you enjoy talks and interviews.

Albert Einstein: Becoming a Freethinker Taken from: Albert Einstein's Autobiographical Notes Open Court Publishing Company, LaSalle and Chicago, Illinois, 1979. pp 3-5. When I was a fairly precocious young man I became thoroughly impressed with the futility of the hopes and strivings that chase most men restlessly through life. 30 Books I’m Glad I Read Before 30 In various ways, these 30 books convey some of the philosophy of how Angel and I live our lives. I honestly credit a fraction of who I am today to each title. Thus, they have indirectly influenced much of what I write about on this site.

In the Pipeline: Cadmium is bad news. Lead and mercury get all the press, but cadmium is just as foul, even if far fewer people encounter it. Never in my career have I had any occasion to use any, and I like it that way. There was an organocadmium reaction in my textbook when I took sophomore organic chemistry, but it was already becoming obsolete, and good riddance, because this one of those metals that's best avoided for life. It has acute toxic effects, chronic toxic effects, and if there are any effects in between those it probably has them, too. Fortunately, cadmium is not well absorbed from the gut, and even more fortunately, no one eats it.

15 Honest Questions The Person You Marry Should Be Able To Answer Marriage really is a beautiful thing. I used to think it was a bit pointless, just a piece of paper that allows you an extra tax cut. However, the more I thought about it, the more I learned to appreciate what marriage could be. Marriage gets a bad rap because most people are really bad at it. 18 Cool Inventions From the Past The time between the wars – the Great War and WW2 was one of great loss and uncertainty, but also one of invention, creativity and new ideas. The horrors of WWI shattered enlightenment belief that progress would continue and reason would prevail. New ideas and patterns of life developed in the 1920′s and in the way that people looked at the world [1].

Things I Won't Work With: Dioxygen Difluoride The heater was warmed to approximately 700C. The heater block glowed a dull red color, observable with room lights turned off. The ballast tank was filled to 300 torr with oxygen, and fluorine was added until the total pressure was 901 torr. . . And yes, what happens next is just what you think happens: you run a mixture of oxygen and fluorine through a 700-degree-heating block. After 75 Years of Alcoholics Anonymous, It's Time to Admit We Have a Problem For much of the past 50 years or so, voicing any serious skepticism toward Alcoholics Anonymous or any other 12-step program was sacrilege—the equivalent, in polite company, of questioning the virtue of American mothers or the patriotism of our troops. If your problem was drink, AA was the answer; if drugs, Narcotics Anonymous. And if those programs didn’t work, it was your fault: You weren’t “working the steps.” The only alternative, as the 12-step slogan has it, was “jails, institutions, or death.”

40 Belief-Shaking Remarks From a Ruthless Nonconformist If there’s one thing Friedrich Nietzsche did well, it’s obliterate feel-good beliefs people have about themselves. He has been criticized for being a misanthrope, a subvert, a cynic and a pessimist, but I think these assessments are off the mark. I believe he only wanted human beings to be more honest with themselves. Dark Ages From Wikipedia, the free encyclopedia Dark Ages may refer to: In history and sociology[edit] Turmeric more Effective than Prozac at Treating Depression It’s common knowledge in the natural health world that pharmaceuticals often (if not always) do more harm than good. It’s also clear that foods, herbs, and other natural sources can offer similar benefits without those nasty side effects. Once again, our beliefs have been affirmed by science: A recent study published in Phytotherapy Research says that not only is turmeric effective at treating depression, it may even be more effective than some of the most common anti-depressant drugs currently on the market. While previous studies have indicated the effectiveness of turmeric (curcumin) in treating serious depression, this study was the first randomized controlled clinical trial of its kind. Researchers with the Department of Pharmacology of Government Medical College in Bhavnagar, Gujarat, India compared the effects of turmeric and Prozac (fluoxetine), both used together and individually, in 60 patients diagnosed with major depressive disorder (MDD).

Crimes Against Humanity Having been conditioned your entire lives, the way we are all conditioned our entire lives, to receive sound-bite answers to questions we have never had the critical ability to form in our minds, forecloses our ability to interrogate reality and draw conclusions from it. That is the function of the media. That is the function of the educational system you understand. The Egyptian Book of the Dead Index Sacred Texts Egypt The Papyrus of Ani by Introduction Translation Because of the substantial amount of hieroglypics interspersed in the original text, I have omitted the ### 'glyph' placeholder where context permits, for readability.

Just a bro who likes philosophy. -- Maybe you've got a big paper coming up, and you haven't done the reading. Maybe there's this guy you've heard about, but you don't have the time to wade through the text yourself. Whatever, bro, I don't judge. Just e-mail your requests to philosophybro@gmail.com. by morgangh Apr 10

Related:  Educational • Texts • Talks & Blogs • Debate Prep
Related:  Psychologist Mental Philosophy BDSM - Soumission - Humiliation   -  Philosophy since the Enlightenment, by Roger Jones   -  Health research : mood and intellectual performance   -  Emotions Are A Resource, Not A Crutch   -  » Blog Archive » 50 Ways to Be More Humble and to Act Humbly   -  Antidepressants in Bipolar Disorder   -  Login - FetLife   -  TEDxBloomington - Shawn Achor - "The Happiness Advantage: Linking Positive Brains to Performance" - YouTube   -  Touch the Sky: 7 Psychoactive Substances to Expand Your Mind | Matador Network   -  The 7 Chakras for Beginners - mindbodygreen   -  Adventures in Depression   -  The Secret to Not Caring What People Think   -  Meisner technique - Wikipedia, the free encyclopedia   -  30 Things to Start Doing for Yourself   -  How to Motivate Yourself: 14 Easy Ways | Inc.com   -  Thyroid, Depression and Mental Health - Stop The Thyroid Madness   -  Welcome to GoCognitive | GoCognitive   -  Encyclopedia of Mental Disorders   -  Myrko Thum's Personal Development Blog   -  Boost Your Brain Power: A Simple Exercise | Inc.com   -  Assertiveness Skills - Counseling Center (NDSU)   -  Magnesium for Depression: A Cure for Depression using Magnesium?   -  Post-Traumatic Stress Disorder   -  Mindfulness Exercises - Mindfulness Techniques That Work   -  10 Reasons Why Oxytocin Is The Most Amazing Molecule In The World   -  Stress (biology) - Wikipedia, the free encyclopedia   -  How To Get Rid of Negative Thoughts - PsyBlog   -  Psychology 102: Educational Psychology Course - Online Video Lessons | Education Portal   -  Happy Thoughts: Here are the things proven to make you happier:   -  What is Positive Psychology? - YouTube   -  MoodGYM Training Program   -  Rosenhan experiment   -  The Best of Socially Awkward Penguin   -  Depression Test - Am I depressed | Moodscope   -  Abusive parents: What do grown children owe the mothers and fathers who made their childhood a living hell?   -  The Future of Self-Improvement, Part I: Grit Is More Important Than Talent - 99U   -  Rosalind Robertson (the DIY Couturier) (21 Tips to Keep Your Shit Together When You're...)