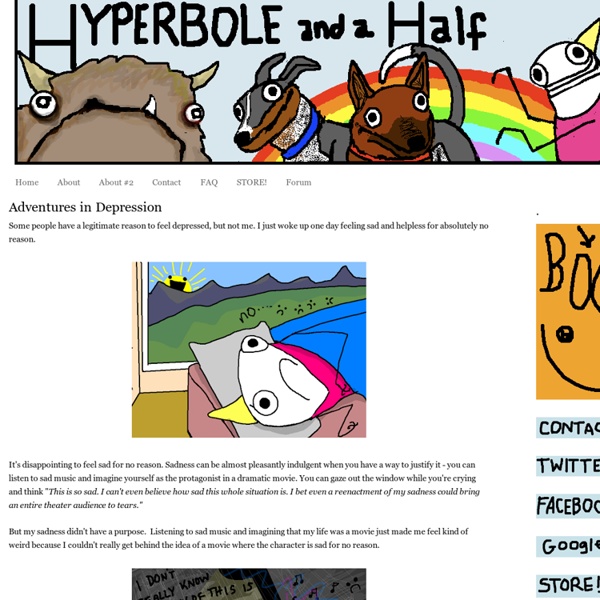 Some people have a legitimate reason to feel depressed, but not me. I just woke up one day feeling sad and helpless for absolutely no reason. It's disappointing to feel sad for no reason. Sadness can be almost pleasantly indulgent when you have a way to justify it - you can listen to sad music and imagine yourself as the protagonist in a dramatic movie. You can gaze out the window while you're crying and think "This is so sad. I can't even believe how sad this whole situation is. But my sadness didn't have a purpose. Essentially, I was being robbed of my right to feel self pity, which is the only redeeming part of sadness. And for a little bit, that was a good enough reason to pity myself. Standing around feeling sorry for myself was momentarily exhilarating, but I grew tired of it quickly. I tried to force myself to not be sad. When I couldn't will myself to not be sad, I became frustrated and angry. Which made me more sad. Which then made me more frustrated and abusive. I felt invincible.

Life is a game. This is your strategy guide 682k shares Share on Facebook Share on Twitter Real life is the game that – literally – everyone is playing. But it can be tough. This is your guide. Adventures in Depression - StumbleUpon My mom baked the most fantastic cake for my grandfather's 73rd birthday party. The cake was slathered in impossibly thick frosting and topped with an assortment of delightful creatures which my mom crafted out of mini-marshmallows and toothpicks. To a four-year-old child, it was a thing of wonder - half toy, half cake and all glorious possibility. But my mom knew that it was extremely important to keep the cake away from me because she knew that if I was allowed even a tiny amount of sugar, not only would I become intensely hyperactive, but the entire scope of my existence would funnel down to the singular goal of obtaining and ingesting more sugar. My need for sugar would become so massive, that it would collapse in upon itself and create a vacuum into which even more sugar would be drawn until all the world had been stripped of sweetness.

Nature's laws may vary across the Universe (PhysOrg.com) -- One of the laws of nature may vary across the Universe, according to a study published today in the journal Physical Review Letters. One of the most cherished principles in science - the constancy of physics - may not be true, according to research carried out at the University of New South Wales (UNSW), Swinburne University of Technology and the University of Cambridge. The study found that one of the four known fundamental forces, electromagnetism - measured by the so-called fine-structure constant and denoted by the symbol ‘alpha' - seems to vary across the Universe. The first hints that alpha might not be constant came a decade ago when Professor John Webb, Professor Victor Flambaum, and other colleagues at UNSW and elsewhere, analysed observations from the Keck Observatory, in Hawaii.

Verb Tense Exercise 6 Since computers were first introduced to the public in the early 1980's, technology (change) a great deal. The first computers (be) simple machines designed for basic tasks. They (have, not) much memory and they (be, not) very powerful. Early computers were often quite expensive and customers often (pay) thousands of dollars for machines which actually (do) very little. Most computers (be) separate, individual machines used mostly as expensive typewriters or for playing games. John Schneider I recently got asked to shoot photos for a show called “The Haves and HaveNots” for the Oprah Winfrey Network. I’ve shot many shows in my career and I always enjoy these shoots because there are so many challenges involved. There’s tons of “talent” aka celebrities involved, all their teams, all the hair, makeup and wardrobe involved, there’s very limited time, there are tons of shots to create, there’s an immense pressure to “nail” the creative concept and obviously there is usually lots of money involved.

Expectations vs. Reality (16 Pics) Things don’t always go as planned. Check out the pics below to see a few examples of what happens when our expectations get punched in the face by reality. via via Tickling Expectations: Visualizing How A Population Grows To 7 Billion 7 Billion: How Did We Get So Big So Fast? Watch as global population explodes from 300 million to 7 billion. Sometime Monday, the world will have more humans than ever: 7 billion, according to the U.N. The U.N. estimates that the world's population will pass the 7 billion mark on Monday. Much of that growth has happened in Asia — in India and China. Those two countries have been among the world's most populous for centuries.

Tata Institute of Social Sciences Candidates interested in applying for Ph.D in Women's Studies or Social Sciences at Hyderabad have two options. One, apply to go through the admission process to join TISS Hyderabad and be guided by TISS Hyderabad Faculty. Two, apply to go through the process of TISS admission, register as scholars with TISS but have guides from Council for Social Development (CSD), Hyderabad and also receive ICSSR Fellowship, if candidate is not in employment or does not have any other Fellowship.

10 Reasons Why EarthShips Are F!#%ing Awesome Earthships are 100% sustainable homes that are both cheap to build and awesome to live in. They offer amenities like no other sustainable building style you have come across. For the reasons that follow, I believe Earthships can actually change the world. See for yourself! 1) Sustainable does not mean primitive Show Me Your Money Face! - StumbleUpon Proving that money can buy happiness, these money/face mashups are stacking up quick around the web. The visual trick has been around for a while now, but not until this week when Reddit user MadSon11 posted his head matched with Alexander Hamiltons jaw (above) did the meme really get some legs. Redditors the world over have posted images using both U.S. bills and their own currency. Want to see MadSon11′s lower half? See the bottom of this post! See Also SHOW ME YOUR TEENAGE MUTANT NINJA NOSES!

Bangkok Underwater - Alan Taylor - In Focus Heavy monsoon rains have been drenching Southeast Asia since mid-July, causing mudslides and widespread flooding. The deluge has now reached Bangkok, with rising water and associated problems affecting most of the city's 10 million residents. Prime Minister Yingluck Shinawatra said that parts of the capital could be inundated by up to 1.5 meters of water and remain flooded for up to a month. Around Bangkok, the second-largest airport has closed, food prices are soaring, clean water is becoming scarce, and the country is declaring a holiday from Thursday until Monday to allow people to evacuate.

Sample Answers for IAS Mains Examination(UPSC) by Rachit Raj – Part 1 Hello Students, As we received a lot of request from students for uploading the sample answers by Rachit Raj, that he used to write while preparing for the UPSC Mains examination we are going to do that in the following blog. We are sure these answers will be very useful for the students who are preparing for the Mains Examination. These are hand-written notes so kindly bear with the quality of the same.

Here's How The World's Most Brilliant People Scheduled Their Days Alas, there are but 24 hours in a day. And when you have a seemingly insurmountable load of work, it can be a quite a challenge to even know where to start. But remember that history’s most legendary figures — from Beethoven to Beyonce — had just as little (or just as much) time as you have. Using the book Daily Rituals: How Artists Work by Mason Currey, RJ Andrews at Info We Trust designed some enlightening visualizations of how history’s most creative and influential figures structured their days. Unfortunately, there is no common prescription for the perfect schedule, and each person had a very different set of rituals. Based on the charts, we learn that some of history’s icons had more eccentric habits than others.

This article is speaking about depression and the journey along the way. Some people may have a reason to feel depressed and wanting to be alone. But sometimes, people will just wake up one morning feeling sad or even nothing at all . You wonder to yourself why you have this horrible feeling of sadness and what is driving it. You know you are depressed, but there is no reason why. Along the way you lay down alot and sleep and feel as if you hate yourself. All you want to do it curl up in a corner and pretend you are not even there. After awhile, you finally go out despite your horrible feeling. You realize that this feeling will go away and you just have to try something that will make you feel happy. by bridgets_sstories Apr 8