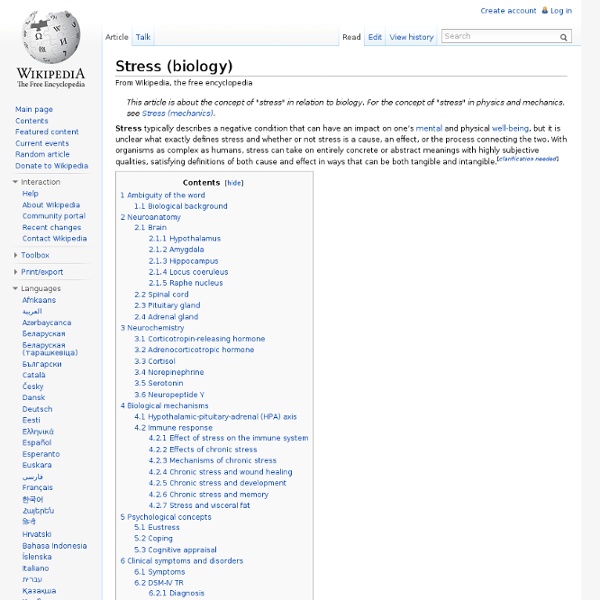 Walter Cannon used it in 1926 to refer to external factors that disrupted what he called homeostasis.[2] But "...stress as an explanation of lived experience is absent from both lay and expert life narratives before the 1930s".[3] Physiological stress represents a wide range of physical responses that occur as a direct effect of a stressor causing an upset in the homeostasis of the body. Upon immediate disruption of either psychological or physical equilibrium the body responds by stimulating the nervous, endocrine, and immune systems. The reaction of these systems causes a number of physical changes that have both short and long term effects on the body. Homeostasis is a concept central to the idea of stress. The ambiguity in defining this phenomenon was first recognized by Hans Selye (1907-1982) in 1926. Human brain (hypothalamus=red, amygdala=green, hippocampus/fornix=blue, pons=gold, pituitary gland=pink) The Spinal Cord Human spinal cord Adrenal gland Peripheral nervous system (PNS) Related:  stress

Stress Management Group Activities Stress, in and of itself, is not good or bad. It can be motivating. It can also be physically and psychologically harmful. The effect of stress is determined by your reaction to it so learning to manage it is a necessity. Activity #1: Have a Treasure Hunt Treasure hunts are a fun way to have groups work in smaller teams, teach problem-solving skills, and introduce a little friendly competition. Purpose Treasure hunts can strengthen relationships, foster teamwork, and help new members fit in. Design There are many possibilities when it comes to designing a treasure hunt. Having to figure out riddles to find the next clue Having to find a list of objects (or specific information) within a certain area Materials You'll need the following materials for this activity. Paper/pen for clues A prize for the winning team Instructions Here is an example of a clue-focused treasure hunt. Decide the geographic scope of the hunt. Alternate Method Activity #2: Play With Stress Balls Meditation can help by:

The Science of Stress We all experience stress. Even the most seemingly Zen-like person, with not a worry in the world, has experienced stress. I can assure you that stress is an innate emotion, which everyone experiences from time to time. While there are many definitions of stress, I like to think of it as something that disturbs homeostasis.1 Stress is not something that we should try to avoid as if it were some sort of unhealthy food. Where Does Stress Come From? Stress primarily develops from two sources: external and internal. <a href=" src=" alt="The Most Common Sources of Stress" border="0" /></a><br />Source: <a href=" Blog</a> Close Embed Image Stress and Time Stress can come on quickly, like when you find out you have a pop quiz in five minutes, or it can linger in the back of your mind for weeks, like when preparing for an important business meeting. Sources:

7 Facts About Sugar and Depression: Is There a Connection? Image by Brook Lark Food can have many effects on your mood and emotions. When you’re hungry and want food, you can be grumpy, upset, or even angry. When you’ve had a delicious meal, you may feel elated and euphoric. The food you eat can also have long-term implications for your health. Specifically, eating too much sugar may increase your risk for mood disorders, including depression. Sugar occurs naturally in complex carbohydrates like fruits, vegetables, and grains. Eating too many simple sugars may increase your risk for depression, mood disorders, and several chronic health issues. Researchers in London discovered that a diet rich in whole foods like fruits, vegetables, and fish, can lower your risk for depression in middle age. You already know you should eat plenty of fruits, vegetables, and fish for heart and brain health and to help ward off chronic diseases. A study done in rats found that the brain’s sweet receptors are not adapted to constant and high levels of sugar. 1. 3.

How a 4th-century Taoist concept is treating anxiety While the Tao Te Ching is not one of the world’s most discussed religious texts, at least relative to the amount of attention the Bible, Quran, and Buddhist and Hindu doctrines receive, Laozi’s slim volume of instructions has massively influenced how we think about Eastern philosophy. The basis of Taoism is embedded in his series of short and punchy ideas that are rooted in, at times, paradoxical thinking. Consider one of his most famous aphorisms: “The Tao does nothing, and yet nothing is left undone.” As with those who believe meditation is “doing nothing,” wu-wei is not an easily graspable concept when approached from a mindset of constant action, i.e. the perpetual distraction our brains (and by extension, technology) afford us. Wu-wei as “not forcing” is what we mean by going with the grain, rolling with the punch, swimming with the current, trimming sails to the wind, taking the tide at its flood, and stooping to conquer. Hobson uses the “triad test” to make this point:

Brain, The Immune System And Stress: Ultimately Connected, New Studies Suggest Colorful abstract background blur motion with bokeh lightGetty Something we all are faced with is stress, especially during the end of the year when we have deadlines to meet, along with the numerous responsibilities during the holiday season. A report put out by the American Institute of Stress, found that about 80% of workers feel stress on the job, with 40% feeling that their “job is very or extremely stressful.” This is due to the fact that the workforce landscape has changed and, as a result, many workplaces are attempting to mitigate stress. For a long time it has been thought that the brain and the immune system are two separate entities that exist in different realms. Scientists have found that immune system supports the brain during times of psychological distress. Findings of this research suggest that stress is not merely a psychological state experienced by the brain, rather the immune system plays a role in communicating with the brain and supporting us in times of stress.

Do stress factors alter DNA methylation during aging? Stress may change DNA methylation patterns Flickr What is meant by epigenetic aging? Epigenetic aging is a measure that uses DNA methylation levels to predict an individual’s age. It takes into account the methylation levels of many sites from different parts of the genome. What these sites have in common is that they correlate strongly with chronological age. Several DNA methylation-based predictors of age have been developed. However, in some individuals DNA methylation age differs substantially from the actual age, and we posit that the difference between the two is a measure of accelerated aging. Can you briefly describe how stress factors can lead to altered DNA methylation? Stress has many ways of ‘getting under the skin’. Stress has many ways of ‘getting under the skin’. The main glucocorticoid in humans is cortisol, which binds to and activates glucocorticoid receptors that act as transcription factors. What were your main findings? What are the implications of your findings? Flickr

Allostatic load The graph represents the effect of increased stress on the performance of the body. The lower the stress levels are in the body, the less likely the allostatic load model will have a significant effect on the brain and health. Although, an increase in stress levels results in an increase in stress on the brain and the health of individuals, making it more likely for the body to have significant effects on homeostasis and cause breakdown of the body systems. Regulatory model[edit] The term is part of the regulatory model of allostasis, where the predictive regulation or stabilisation of internal sensations in response to stimuli is ascribed to the brain.[3] Allostasis involves the regulation of homeostasis in the body to decrease physiological consequences on the body.[4][5] Predictive regulation refers to the brain's ability to anticipate needs and prepare to fulfill them before they arise.[3] Part of efficient regulation is the reduction of uncertainty. Types[edit] Measurement[edit]