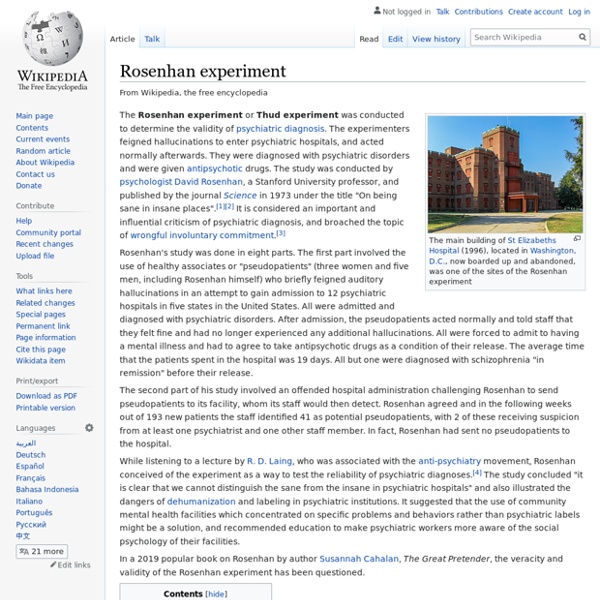 Experiment to determine the validity of psychiatric diagnosis Rosenhan's study was done in eight parts. The first part involved the use of healthy associates or "pseudopatients" (three women and five men, including Rosenhan himself) who briefly feigned auditory hallucinations in an attempt to gain admission to 12 psychiatric hospitals in five states in the United States. All were admitted and diagnosed with psychiatric disorders. After admission, the pseudopatients acted normally and told staff that they felt fine and had no longer experienced any additional hallucinations. All were forced to admit to having a mental illness and had to agree to take antipsychotic drugs as a condition of their release. The second part of his study involved an offended hospital administration challenging Rosenhan to send pseudopatients to its facility, whom its staff would then detect. While listening to a lecture by R. Pseudopatient experiment[edit] Non-existent impostor experiment[edit] See also[edit]

Triple Nine Society The Triple Nine Society (TNS), founded in 1978, is a 501(c)(7) non-profit voluntary association of adults who have scored at or above the 99.9th percentile on specific IQ tests (or similar) under supervised conditions, which generally corresponds to an IQ of 149 or greater using a standard deviation of 16 (e.g. Stanford-Binet IV) and 146 or greater with a standard deviation of 15 (e.g. WAIS-IV, Stanford-Binet 5).[1] This compares with Mensa International, the better-known and larger membership high IQ society which admits applicants who score at or above the 98th percentile, which generally corresponds with an IQ score of 131 (SD 15) or 133 (SD 16), or greater. As of mid-March 2015, TNS reported over 1,500 members residing in more than 40 countries, with most members residing in the United States and Europe.[2] TNS publishes a journal entitled Vidya which contains articles, poetry and other creative content contributed by members conversant with a variety of subjects.

untitled Introduction Robert Monroe developed and patented a binaural-beat technology called the Hemi-Sync auditory-guidance system. The Monroe Institute, a 501c(3) nonprofit research and educational organization, uses this Hemi-Sync system within an educational process. During this process individuals listen to a combination of multiplexed audio binaural beats that are mixed with music, pink sound, and/or the natural sound of surf. Positive Psychology Resources, Happiness, Tips and Techniques Active and Constructive Responding Shelly Gable, assistant Professor of Psychology at the University of California, has examined the different types of responses we give to other people's good news. How do you respond when people share good news with you? The manner in which you respond when others share triumph with you directly builds or undermines your relationships. Research into couples and intimate relationships suggests that supporting partners when good things happen is as important in building a relationship as supporting when bad things happen. You can learn how to build relationships by focusing on good news through a technique called ?

Scientists Claim That Quantum Theory Proves Consciousness Moves To Another Universe At Death A book titled “Biocentrism: How Life and Consciousness Are the Keys to Understanding the Nature of the Universe“ has stirred up the Internet, because it contained a notion that life does not end when the body dies, and it can last forever. The author of this publication, scientist Dr. Robert Lanza who was voted the 3rd most important scientist alive by the NY Times, has no doubts that this is possible. Beyond time and space Lanza is an expert in regenerative medicine and scientific director of Advanced Cell Technology Company. Before he has been known for his extensive research which dealt with stem cells, he was also famous for several successful experiments on cloning endangered animal species.

The Mysterious Plain of Jars Often referred to as â€œan Asian version of Stonehengeâ€, the Plain of Jars is one of the most enigmatic sights on Earth. Shrouded in mystery and myth, this ancient place has fascinated archeologists and scientists ever since its discovery. [Photo Credits] Thousands of giant stone jars scattered around the Xieng Khouang plain, in Laos form one of the most bizarre archeological collections in history. Although it has been determined they are over 2000 years old, no one has yet been able to determine who built them and for what purpose. Transpersonal psychology Issues considered in transpersonal psychology include spiritual self-development, self beyond the ego, peak experiences, mystical experiences, systemic trance, spiritual crises, spiritual evolution, religious conversion, altered states of consciousness, spiritual practices, and other sublime and/or unusually expanded experiences of living. The discipline attempts to describe and integrate spiritual experience within modern psychological theory and to formulate new theory to encompass such experience. Transpersonal psychology has made several contributions to the academic field, and the studies of human development, consciousness and spirituality.[3][4] Transpersonal psychology has also made contributions to the fields of psychotherapy[5] and psychiatry.[6][7] Definition[edit] Lajoie and Shapiro[8] reviewed forty definitions of transpersonal psychology that had appeared in academic literature over the period from 1968 to 1991.

Rhetoric - Wikipedia, the free encyclopedia Painting depicting a lecture in a knight academy, painted by Pieter Isaacsz or Reinhold Timm for Rosenborg Castle as part of a series of seven paintings depicting the seven independent arts. This painting illustrates rhetorics. From Ancient Greece to the late 19th century, it was a central part of Western education, filling the need to train public speakers and writers to move audiences to action with arguments.[4] The word is derived from the Greek ῥητορικός (rhētorikós), "oratorical",[5] from ῥήτωρ (rhḗtōr), "public speaker",[6] related to ῥῆμα (rhêma), "that which is said or spoken, word, saying",[7] and ultimately derived from the verb ἐρῶ (erō), "say, speak".[8] Uses of rhetoric[edit]

In the Shadow of Hegel: How Does Thought Arise Out of Matter? What's the Big Idea? Before neuroscience and quantum physics, there was Georg Wilhelm Friedrich Hegel. The 19th century German idealist revolutionized Western thought, and every great thinker since has been working in his shadow, says Slavoj Žižek, the Slovenian philosopher and cultural critic. Characterisation How to write convincing characters Characterisation - the task of building characters - isn't easy. But if you're struggling to build characters with real life and vigour, here is our very own patented technique. If you haven't yet started your book, then work on the exercise below before you start.