21 Tips to Keep Your Shit Together When You're Depressed. 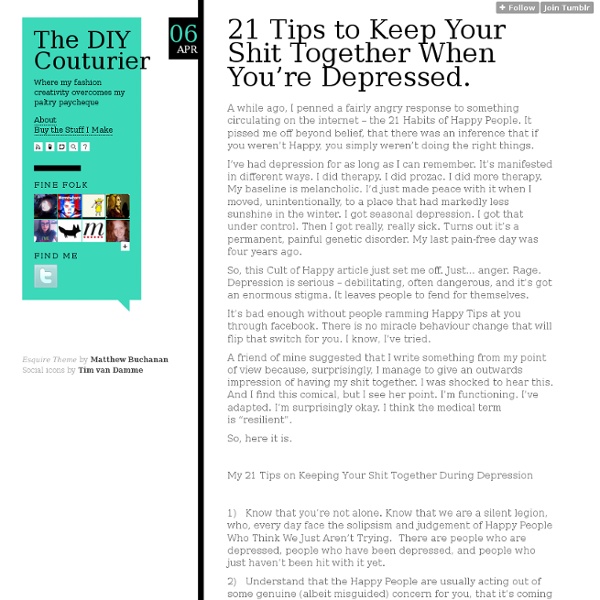 A while ago, I penned a fairly angry response to something circulating on the internet – the 21 Habits of Happy People. It pissed me off beyond belief, that there was an inference that if you weren’t Happy, you simply weren’t doing the right things. I’ve had depression for as long as I can remember. It’s manifested in different ways. I did therapy. I did prozac. So, this Cult of Happy article just set me off. It’s bad enough without people ramming Happy Tips at you through facebook. A friend of mine suggested that I write something from my point of view because, surprisingly, I manage to give an outwards impression of having my shit together. So, here it is. My 21 Tips on Keeping Your Shit Together During Depression 1) Know that you’re not alone. 2) Understand that the Happy People are usually acting out of some genuine (albeit misguided) concern for you, that it’s coming from a good place, even if the advice feels like you’re being blamed for your disease. 9) Learn how to meditate.

The One Thing You Need to Do to Find Real Happiness racorn/Shutterstock Our minds create many thoughts that can lead to our being unhappy, the key phrase being, our minds create. The thoughts and beliefs that we hold affect everything about us. Here in the United States, and in most of the developed world, people are consumed by consumerism. So much of our unhappiness comes from wishing that things were different, wishing that we had something else instead of what we do have.

The Ultimate Editing Checklist As we all know, content creation isn't as simple as just stringing together a few words and hitting "publish." At least all high-quality content creators know this. If you really think about it, the editorial process has quite a few steps -- from ideation, to concepting, to production, to proofreading, editing and copyediting. Unfortunately, it's that last part that often gets undermined, rushed through, or altogether just swept aside as writers and content creators hurry to get content out the door.

17 arrested as Seattle May Day protests turn violent NEW: 17 are arrested, police sayNEW: Police say eight officers are injuredMany take to the streets on May 1 to demand better working conditions (CNN) -- A May Day protest in downtown Seattle turned violent Wednesday night, with police saying they resorted to pepper spray to disperse demonstrators who pelted them with whatever was at hand. Seattle Police said the crowd tossed rocks, bottles, metal pipes, fireworks -- and even a skateboard. The clashes left eight officers with injuries, and police said they arrested 17 people, on various offenses including property destruction and assault. The injured officers suffered mostly bumps and bruises with the exception.

Lotion Bits - All Natural - Melts in the Palm of your Hands Lotion Bits - kids love them! Keep them in a small jar in the bathroom and after a shower just grab one, put it in the palm of your hands and rub your hands together! The solid shape will "melt" in your hands and you can put it all over! My nieces love it because it's not just lotion, but it's safe and non-toxic and they like to use it on their lips as well! If you only need a little, you can grab a thinner piece - for the whole body grab a big one! Health: Depression Diaries and It's Okay To Be Sad [Content Note: Depression] Acknowledging to yourself that you are depressed and have a serious illness that is going to interfere with your daily life sometimes and that it's Not Your Fault and the illness can't be beaten by willpower and bootstraps can be very cathartic and helpful. It can also open a whole new barrel of worms. One of the things I've noticed in my fight with medication-induced depression is how Knowing I'm Depressed isn't some kind of magic bullet for treatment. And in fact sometimes it makes it harder. Because now when I feel sad for any reason, there's an almost panic that sets in.

9 Ways to Increase Your Charisma Northfoto / Shutterstock.com When Prince finished a showcase performance in a small Minneapolis movie theater on January 7, 1979, the Warner Records representatives walked out shaking their heads. Prince couldn’t believe it. Not ready for a tour? How was he supposed to sell any records? But the label believed its new artist wasn’t a good enough performer to make a tour profitable. 10 Frequently Asked Questions on Making a Will in Israel 10 Frequently Asked Questions on Making a Will in Israel 1. Why Should I Bother Making a Will? Making a Will, which is usually a simple and relatively inexpensive document in , can be a very straightforward expedient for avoiding intra-family conflict, squabbles and misunderstandings amongst your heirs. In addition, probating a Will, when the time comes, involves much less expense, time and bureaucracy than that required in order to obtain a Succession Order.

15 photos of Seattle May Day mayhem and destruction; plus bonus video SMH at people involved in the Seattle May Day... like seriously? #SeaMayDay— Nicholi (@NichWyto) May 02, 2013 Pictures are worth 1,000 words. Here are 15 photos of the May Day 2013 mayhem in Seattle tonight. This is what addled, muddled, “peaceful” protest on behalf of illegal aliens/anti-capitalism/anti-imperialism/anti-whatever looks like. In the foreground: chunks of asphalt, cement, bottles & other items thrown at officers during eve #seamayday event pic.twitter.com/7Qbbd4wcyS— Seattle Police Dept.

All Natural Lip Balm The week leading up to the new year wasn't exactly how I had pictured it. It was the last week of the boys winter break. I had envisioned walks around downtown looking at the lights, taking down the Christmas tree together, continuing our holiday baking marathon and maybe even a little post Christmas mall browsing. But alas, none of those things happened. The flu happened. Or rather, what I guess must have been the flu.