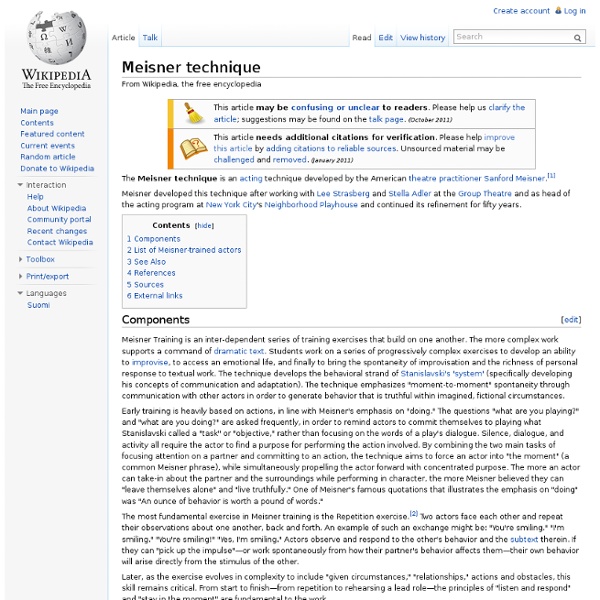 The Meisner technique is an acting technique developed by the American theatre practitioner Sanford Meisner.[1] Components[edit] Meisner Training is an interdependent series of training exercises that build on one another. The more complex work supports a command of dramatic text. List of Meisner-trained actors[edit] Prominent actors who trained at The Neighborhood Playhouse or elsewhere in the Meisner technique include:[2] See also[edit] List of acting techniques References[edit] Sources[edit] Banham, Martin, ed. 1998. External links[edit] Related:  Depersonalisation • Acting • Mental

Mindfulness-based stress reduction Overview[edit] MBSR has been described as "a group program that focuses upon the progressive acquisition of mindful awareness, of mindfulness". People enrolled in a MBSR program practice various meditation techniques, including those focussed on breathing and body awareness.[1] According to Jon Kabat-Zinn, the program's inventor, the basis of MBSR is mindfulness, which he defined as "moment-to-moment, non-judgmental awareness Evaluation of effectiveness[edit] A 2013 systematic review found that MSBR "might be a useful approach" for fibromyalgia patients. A 2011 meta-analysis of MBSR trials said it was a "useful method for improving mental health and reducing symptoms of stress, anxiety and depression" and recommended it as means of improving the quality of life for patients managing disease. A 2010 meta-analysis on the effect of MBSR on the mental health of patients with chronic illness found that it had a small effect on their depressions and psychological distress.[8] See also[edit]

Darcey Bussell Darcey Andrea Bussell CBE (born Marnie Mercedes Darcey Pemberton Crittle[1] on 27 April 1969) is a retired English[2] ballerina. Trained at the Arts Educational School and the Royal Ballet School,[3] she started her professional ballet career at Sadlers Wells Royal Ballet, but after only one year she moved to the Royal Ballet, where she became a principal dancer at just 20 years old in 1989. Bussell is widely acclaimed as one of the great British ballerinas.[4][5] She remained with the Royal Ballet for her whole career, but also performed as a guest artist with many leading ballet companies around the world including NYCB, the Kirov and the Australian Ballet. Since retiring from ballet in 2007, Bussell remains very committed to the dance world. In 2012 she became the President of the Royal Academy of Dance. She is the Patron of the Sydney Dance Company, the Du Boisson Foundation and is the President of the Birmingham Royal Ballet's fund raising appeal. Biography[edit] Modelling[edit]

100 Ways to Simplify Your Life I’ve been striving to simplify my life for many years now, and have recently (through my writing) been advising others how to do the same. In the process, I’ve learned that making little changes in our attitudes, habits, and environment can have a big impact. So today, I thought I’d compile a list of 100 ways to simplify your life – from the practical to the philosophical, and everything in between. Of course, not every item on the list will work for every person reading it. However, I hope that you’ll find at least a little something that speaks to you, helps you save some time, space, and energy — and perhaps even increases your serenity and happiness! AROUND THE HOUSE1. WARDROBE AND STYLE21. KITCHEN AND DINING36. OFFICE AND TECH46. TIME MANAGEMENT66. ATTITUDE81. MISCELLANEOUS96.

Buteyko method Konstantin Pavlovich Buteyko The Buteyko method or Buteyko Breathing Technique is a form of complementary or alternative physical therapy that proposes the use of breathing exercises as a treatment for asthma as well as other conditions. The method takes its name from Ukrainian doctor Konstantin Pavlovich Buteyko, who first formulated its principles during the 1950s. Research into the use of the Buteyko method has focused almost exclusively on the treatment of asthma, and have had methodological problems. History[edit] The Buteyko method was originally developed in the 1950s by physiologist Konstantin Buteyko in Russia.[1] The first official study into the effectiveness of the Buteyko Method on asthma was undertaken in 1968 at the Leningrad Institute of Pulmonology. Theory[edit] Description[edit] Nasal breathing[edit] The Buteyko method emphasizes the importance of nasal breathing, which protects the airways by humidifying, warming, and cleaning the air entering the lungs. Relaxation[edit]

10 Lessons in Film Acting from Michael Caine How do you make sure you stay in frame and focus while performing? What is the best way to work with off-camera actors while performing a close-up? How can props like cigarettes become a major headache? Michael Caine answers these questions and more as part of a film acting workshop broadcast on the BBC. You can watch the hour-long special in its entirety after the jump, along with 10 film acting lessons pulled from it — highly recommended for actors and non-actors alike!: 10 lessons I learned from Sir Michael Caine on film acting: 1) When speaking to an actor off-camera, look into one eye and stick with it. 2) Film acting is, in large part, reacting and listening. 3) While rehearsing something with a fellow actor, if a crew member can come up and recognize you’re rehearsing vs. having a real conversation, then you aren’t doing it right. 5) The camera catches everything you do, so don’t be afraid to play things subtley. 9) A majority of movie acting is relaxation. [via FilmmakingIQ]

Advice from Somewhere ONE. Give people more than they expect and do it cheerfully. TWO. This came around anonamously, identified as from a "Chinese Tantra Totem" - One definition of a tantra being a statement of principle or religious practice and collections of such principles and practices. Mindfulness (psychology) Mindfulness as a psychological concept is the focusing of attention and awareness, based on the concept of mindfulness in Buddhist meditation.[1] It has been popularised in the West by Jon Kabat-Zinn.[2] Despite its roots in Buddhism, mindfulness is often taught independently of religion.[3][4] Clinical psychology and psychiatry since the 1970s have developed a number of therapeutic applications based on mindfulness for helping people suffering from a variety of psychological conditions.[5] Several definitions of mindfulness have been used in modern psychology. bringing one’s complete attention to the present experience on a moment-to-moment basis,[6] or involves paying attention in a particular way: on purpose, in the present moment, and nonjudgmentally,[6] a kind of nonelaborative, nonjudgmental, present-centered awareness in which each thought, feeling, or sensation that arises in the attentional field is acknowledged and accepted as it is.[7]

IATSE LOCAL 873 contributes $25,000 to Actors’ Fund of Canada | IATSE Labor Union, representing the technicians, artisans and craftpersons in the entertainment industry In a move signalling a brighter outlook for film & television production in southern Ontario, IATSE Local 873 has supplemented its annual $25,000 contribution to the Actors’ Fund of Canada with a commitment to ongoing support in the form of an additional quarterly contribution to the Fund equivalent to $8 per member. Local 873’s pledge of quarterly contributions based on the number of members lends momentum to a growing trend in support for the Fund amongst Canadian locals of the IATSE, with almost half of the members in Canada now represented by locals that choose to contribute in this way. IATSE 873 President Wayne Goodchild commented on the new funding from the 2,000 member local, saying "Our members have turned to the Fund in times of personal crisis to a great degree in recent years. We know that the Fund requires financial stability to ensure it is there for our industry for many years to come.

Dialectical behavior therapy Dialectical behavior therapy (DBT) is a therapy designed to help people change patterns of behavior that are not effective, such as self-harm, suicidal thinking and substance abuse. This approach works towards helping people increase their emotional and cognitive regulation by learning about the triggers that lead to reactive states and helping to assess which coping skills to apply in the sequence of events, thoughts, feelings and behaviors that lead to the undesired behavior. DBT assumes that people are doing the best that they can, but either are lacking the skills or are influenced by positive or negative reinforcement that interfere with one’s functioning. DBT is a modified form of cognitive-behavioral therapy that was originally [timeframe?] developed by Marsha M. Overview[edit] Linehan observed "burn-out" in therapists after coping with "non-motivated" patients who repudiated cooperation in successful treatment. All DBT can be said to involve two components: Four modules[edit]

Affective memory Affective memory was an early element of Stanislavski's 'system' and a central part of Method Acting, (two related approaches to acting). Affective memory requires actors to call on the memory of details from a similar situation (or more recently a situation with similar emotional import) to those of their characters. Stanislavski believed actors needed to take emotion and personality to the stage and call upon it when playing their character. He also explored the use of objectives, actioning, and empathizing with the character. "Emotional recall" is the basis for Lee Strasberg's Method acting. See also[edit] External links[edit]

The Mystical Experience Registry: Getting Started with Active Imagination Getting Started with Active Imagination "When it is dark enough, you can see the stars."-Emerson As defined on this site, Active Imagination is possible when one moves his/her everyday consciousness towards the dream world. Try to observe yourself awakening in the morning (or if you prefer, falling asleep at night). From these observations, we learn that our dreaming involves a state of mind where anything is possible. Find the means that allows you to move into profound relaxation but with mental clarity remaining. A Note: These are only the basics to give you some idea of the type of work involved. A CAUTION: If you have any psychiatric condition or suspect that you might have some difficulties handling your dreams, work with the imagination, or maintaining a comfortable grasp on the requirements of everyday living, please do not work with Active Imagination alone. Instructions For More Advanced Work Resources: >Back to Active Imagination & Hypnagogia?