The Future of Self-Improvement, Part I: Grit Is More Important Than Talent 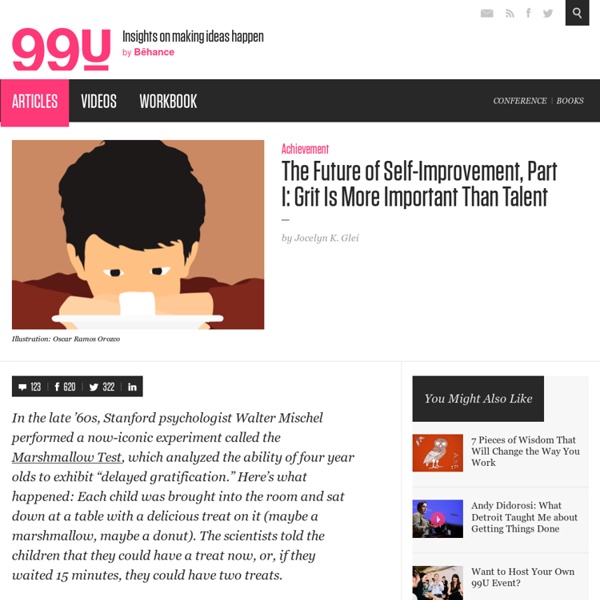 In the late ’60s, Stanford psychologist Walter Mischel performed a now-iconic experiment called the Marshmallow Test, which analyzed the ability of four year olds to exhibit “delayed gratification.” Here’s what happened: Each child was brought into the room and sat down at a table with a delicious treat on it (maybe a marshmallow, maybe a donut). The scientists told the children that they could have a treat now, or, if they waited 15 minutes, they could have two treats. All of the children wanted to wait. When the researchers subsequently checked in on these same children in high school, it turned out that those with more self-control — that is, those who held out for 15 minutes — were better behaved, less prone to addiction, and scored higher on the SAT. Instead of getting obsessed with the marshmallow — the “hot stimulus” — the patient children distracted themselves by covering their eyes, pretending to play hide-and-seek underneath the desk, or singing songs from “Sesame Street.” Related:  mental

The secret of self-control In the late nineteen-sixties, Carolyn Weisz, a four-year-old with long brown hair, was invited into a “game room” at the Bing Nursery School, on the campus of Stanford University. The room was little more than a large closet, containing a desk and a chair. Carolyn was asked to sit down in the chair and pick a treat from a tray of marshmallows, cookies, and pretzel sticks. Carolyn chose the marshmallow. Although Carolyn has no direct memory of the experiment, and the scientists would not release any information about the subjects, she strongly suspects that she was able to delay gratification. Footage of these experiments, which were conducted over several years, is poignant, as the kids struggle to delay gratification for just a little bit longer. Most of the children were like Craig. The initial goal of the experiment was to identify the mental processes that allowed some people to delay gratification while others simply surrendered. Mischel was born in Vienna, in 1930.

True Grit: The Best Measure of Success and How to Teach It Can you predict academic success or whether a child will graduate? You can, but not how you might think. When psychologist Angela Duckworth studied people in various challenging situations, including National Spelling Bee participants, rookie teachers in tough neighborhoods, and West Point cadets, she found: One characteristic emerged as a significant predictor of success. Why is Grit So Important? Using the Grit Scale that Duckworth developed with Chris Peterson, they found that grit is a better indicator of GPA and graduation rates. Add to this the findings (from Bowen, Chingos and McPherson's Crossing the Finish Line) that high school grades have a more predictive value of college success than standardized tests, and you may just see a shift from standardized test scores to high school GPA by some college admissions officers. What is Grit? Some would argue that grit is inherent in Albert Bandura’s research on self-efficacy, and that resilience is also part of it. Can Grit be Taught? 1.

work 5 Must-Read Books for Small Space Organizing KathrynBechenINK/Screen capture The temptation to have a generously-sized home -- one that's big enough for all your stuff -- is a little backwards: Choosing a place with less square footage and then downshifting your consumer habits helps you cut your consumption, use fewer resources, lower your carbon footprint, and reduce the amount of material possessions you have -- which can add stress. TreeHugger founder Graham Hill kept all of this in mind for his own tiny apartment, which he renovated with flexible furniture and walls as part of the LifeEdited project. Want to get your space organized but don't know where to start? 1. Small Space Organizing: A Room-by-Room Guide to Maximizing Your Space hit shelves in January 2012 -- just in time to offer tips and advice to everyone who put "get organized" on their list of New Year's resolutions. 2. 500 Ideas for Small Spaces BuyBooksOnline.com/Screen capture 3. Parable.com/Screen capture 4. Amazon/Screen capture 5. Amazon/Screen capture

Get Hired! | The Designer's Survival Guide - Edited & Curated by Richard Baird Posted: | Author: Richard Baird | Filed under: Design Survival | 0 Comments A guide to help new designers gain employment in the creative industry. Advice provided by international industry professionals, edited and curated by Richard Baird. Listen The key to successfully gaining a new client is the ability to listen. Provided by Kael Pinto Your appearance at meetings First impressions really do count. Provided by @richbaird Research The first step to getting hired is research. Cater you’re resume, cv, and covering letter to individual companies and make it stand out with a slick and well presented piece of communication design. “My first resume consisted of graphs, charts, humor, personalized branding, and a much more laid back tone that set it apart for the stiff and boring tone of a typical resume. Provided by @HeyRui Be specific in your search for a new job Don’t hunt for a general design job — aim for the one that’d allow you to thrive as a creative professional. Provided by @Agapov Details

Neuroplasticity: Learning Physically Changes the Brain How lessons and experiences can shape and grow your students' brains over time. Credit: iStockphoto "There are a few broad principles that we can state come out of neuroscience," says Kurt Fischer, education professor and director of the Mind, Brain, and Education Program at Harvard University. Translation: All those little brains in your classroom are physically growing and changing every time they learn something. Despite the fact that the concept of neuroplasticity is broad, vague, and hardly new (the theory was born in the mid-1800s and was heavily researched throughout the 1990s), it is one of the most reliable and fundamental discoveries about the brain that we have to date. Your Brain on Learning According to neurologist and educator Judy Willis (and suggested by a research-rich chapter in the second edition of Developmental Psychopathology, among many other publications), neuroplasticity is defined as the selective organizing of connections between neurons in our brains.

The Science of Developing Mental Toughness in Health, Work, and Life Have you ever wondered what makes someone a good athlete? Or a good leader? Or a good parent? Why do some people accomplish their goals while others fail? What makes the difference? Usually we answer these questions by talking about the talent of top performers. But I think we all know there is more to the story than that. In fact, when you start looking into it, your talent and your intelligence don’t play nearly as big of a role as you might think. What makes a bigger impact than talent or intelligence? Research is starting to reveal that your mental toughness — or “grit” as they call it — plays a more important role than anything else for achieving your goals in health, business, and life. Why is mental toughness so important? Let’s talk about that now. Before we talk about how to get started, though, I wanted to let you know I researched and compiled science-backed ways to stick to good habits and stop procrastinating. Mental Toughness and The United States Military —Angela Duckworth 1.

profile of a modern teacher memory