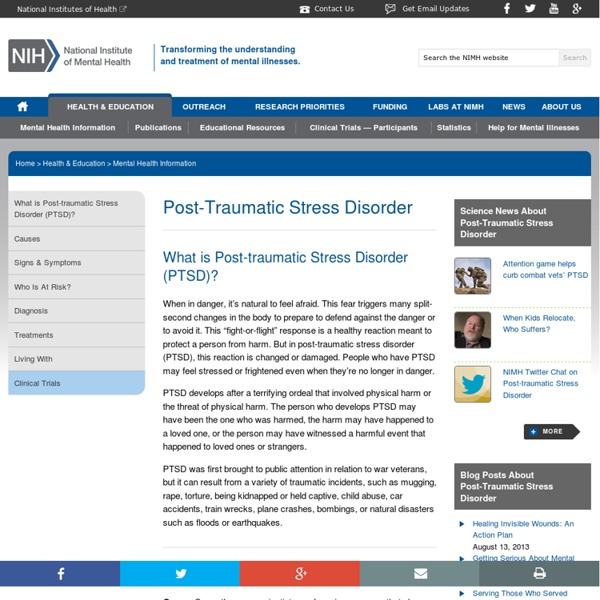 What is Post-traumatic Stress Disorder (PTSD)? When in danger, it’s natural to feel afraid. This fear triggers many split-second changes in the body to prepare to defend against the danger or to avoid it. This “fight-or-flight” response is a healthy reaction meant to protect a person from harm. PTSD develops after a terrifying ordeal that involved physical harm or the threat of physical harm. PTSD was first brought to public attention in relation to war veterans, but it can result from a variety of traumatic incidents, such as mugging, rape, torture, being kidnapped or held captive, child abuse, car accidents, train wrecks, plane crashes, bombings, or natural disasters such as floods or earthquakes. Causes Genes. Stathmin, a protein needed to form fear memories. GRP (gastrin-releasing peptide), a signaling chemical in the brain released during emotional events. Brain Areas. The Next Steps for PTSD Research Signs & Symptoms PTSD can cause many symptoms. 1. 2. 3. Who Is At Risk? Diagnosis

Why Passive Aggression Thrives in the Workplace Passive aggressive behavior is the perfect crime when it comes to sabotaging workplace productivity and souring office morale. Defined as a “deliberate and masked way of expressing covert feelings of anger” (Long, Long & Whitson, 2009), passive aggression, by its very nature, occurs through covert and “justifiable” actions that evade Human Resources’ disciplinary action while undermining authority and disrupting work flow. What makes workplaces so vulnerable to passive aggressive behavior? The Time Factor Other than home, many adults spend more time at work than anywhere else. For the person who has difficulty communicating honestly and directly, he will play out his passive aggressive style wherever he spends a great deal of time. Relationships Happen Whether strictly business or over friendly lunches, enduring relationships develop in most workplaces and within relationships, passive aggression occurs. Honesty is Not Always Professional It’s Personal, Not Business You Remind Me of My Mom