Here are the things that are proven to make you happier 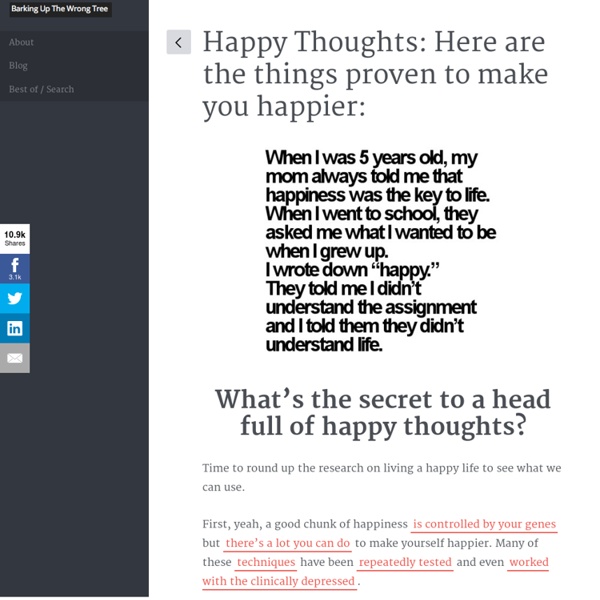 Time to round up the research on living a happy life to see what we can use. First, yeah, a good chunk of happiness is controlled by your genes but there’s a lot you can do to make yourself happier. Many of these techniques have been repeatedly tested and even worked with the clinically depressed. Gratitude, Gratitude, Gratitude I can’t emphasize this one enough. It will make you happier. It will improve your relationships. It can make you a better person. It can make life better for everyone around you. Bronze medalists are happier than silver medalists. Every night before you go to bed write three good things that happened to you that day. There’s a second lesson here: the reverse is also true. Wanna make yourself and someone else extremely happy? Do what you are good at as often as you can “Signature strengths” are the things you are uniquely good at and using them increases happy thoughts. Think about the best possible version of yourself and move toward that. Money is good. Give Savor 1. Related:  Mental Health

Five questions with: Immersion’s haptic evangelist Bob Heubel Bob Heubel is a haptic technology evangelist with Immersion Corporation. He specializes in helping game developers implement feedback effects that players can literally feel, adding touch to the sights and sounds of gaming on smartphones and tablets. Heubel put his mobile device down just long enough to answer Five Questions. 1. The current trend of classic games like Rockstar Games’ Grand Theft Auto III and Max Payne being brought back for new generations to play on their mobile devices very exciting. 2. Bringing a console-like gaming feel to mobile games using Haptic feedback. 3. A lot of the mobile titles from Handy Games–very addictive – and I just finished up Max Payne 3 and working through zombies in Dead Island. 4. The Immersion Haptic SDK that extends the vibration method for Android. 5. I can’t. Bob Heubel, developer evangelist with Immersion Corporation, will be speaking atthe NY Games Conference on September 5 (a Digital Media Wire event).

How To Get People To Like You: 7 Ways From An FBI Behavior Expert Before we commence with the festivities, I wanted to thank everyone for helping my first book become a Wall Street Journal bestseller. To check it out, click here. Meeting new people can be awkward. What should you say? How can you make a good impression? How do you keep a conversation going? Research shows relationships are vital to happiness and networking is the key to getting jobs and building a fulfilling career. But what’s the best way to build rapport and create trust? Robin Dreeke can. Robin was head of the FBI’s Behavioral Analysis Program and has studied interpersonal relations for over 27 years. Robin is the author of the excellent book, It’s Not All About “Me”: The Top Ten Techniques for Building Quick Rapport with Anyone. I gave him a call to get some answers. You’re going to learn: And a lot more. 1) The Most Important Thing To Do With Anyone You Meet Robin’s #1 piece of advice: “Seek someone else’s thoughts and opinions without judging them.” Ask questions. Here’s Robin: Sum Up

Go with the flow: engagement and concentration are key Have you ever been so immersed in what you were doing that all distractions and background chatter just fell away? Nothing existed except the brush and your painting, your skis and the slope, your car and the road. Mihaly Csikszentmihalyi, a renowned professor of psychology at Claremont Graduate University in Claremont, Calif., calls that state of intense absorption “flow.” For decades, he explored people’s satisfaction in their everyday activities, finding that people report the greatest satisfaction when they are totally immersed in and concentrating on what they are doing. In studies by Csikszentmihalyi and others, flow experiences led to positive emotions in the short term, and over the long term, people who more frequently experienced flow were generally happier. Researchers have also found that people vary in how much they value having flow experiences, and in how easy they find it to enter flow. What is flow? You lose awareness of time. You aren’t thinking about yourself.

An Antidote to the Age of Anxiety: Alan Watts on Happiness and How to Live with Presence “How we spend our days is, of course, how we spend our lives,” Annie Dillard wrote in her timeless reflection on presence over productivity — a timely antidote to the central anxiety of our productivity-obsessed age. Indeed, my own New Year’s resolution has been to stop measuring my days by degree of productivity and start experiencing them by degree of presence. But what, exactly, makes that possible? This concept of presence is rooted in Eastern notions of mindfulness — the ability to go through life with crystalline awareness and fully inhabit our experience — largely popularized in the West by British philosopher and writer Alan Watts (January 6, 1915–November 16, 1973), who also gave us this fantastic meditation on the life of purpose. If to enjoy even an enjoyable present we must have the assurance of a happy future, we are “crying for the moon.” What keeps us from happiness, Watts argues, is our inability to fully inhabit the present: Thanks, Ken

Revel Touch lands $10m for mobile e-commerce technology Los Altos, Calif. – Revel Touch, a Los Altos-based developer of mobile e-commerce technology, said on Tuesday it has landed $10 million in its first round of funding, co-led by Foundation Capital and Lightspeed Venture Partners. The company said it will use the proceeds to build out its “merchandising cloud” platform, designed to create touch-optimized shopping experiences for tablets and smartphones. “Retailers and brands are under tremendous pressure to optimize the shopping experience for new channels like tablet and phone,” said Mar Hershenson, the company’s founder and CEO. Revel Touch also recently made several key hires, including former Baynote executive Mark Tsimelzon as vice president of engineering, former Kohlberg Ventures partner and AOL veteran Bill Youstra as senior vice president of marketing and business development, and retail veteran Trudi Michael as vice president of account services. This article was also published in Bay Area Tech Wire. Related links:

What Sleep Deprivation Does to Your Brain, in One Stunning Infographic The common cold may be pretty far down the disease totem pole, but that doesn't make it any more tolerable. Despite all the brilliant advances in modern medicine, nothing makes a worthless, incurably sniffly mess like a good, old-fashioned cold virus. But a team from McMaster University in Ontario thinks it has the key to saving you some sick days. The study, published in the science journal Nature Immunology, identified a protein usually involved in metabolism that helps your immune system detect viruses in your body. But knowing the mechanism to track down viruses is much bigger than alleviating common colds and herpes. "This identifies a critical component of the machinery that immune cells use to detect viruses," Brian Lichty, a professor of pathology and molecular medicine at McMaster University, told Mic in a phone call on Monday. In other words: Understanding this part of the immune system means knowing how to start vaccinating against viruses — and even cancer.

Daily Writing Tips How to Be a Man What does it mean to be a man today? How can men consciously express their masculinity without becoming cold or closed-hearted on the one hand… or wimpy and emasculated on the other? What’s the most loving way for a conscious man to express himself? Here are 10 ways to live more consciously as a man: 1. A man understands and respects the power of choice. When a man makes a decision, he opens the door he wants and closes the doors he doesn’t want. A man doesn’t require the approval of others. 2. A man who claims his #1 commitment in life is his relationship partner (or his family) is either too dishonest or too weak to be trusted. A man knows he must commit to something greater than satisfying the needs of a few people. Life will test the man to see if he’s willing to put loyalty to others ahead of loyalty to his principles. 3. A man is willing to make mistakes. A man’s self-trust is one of his greatest assets. A man grows more from failure than he does from success. 4. 5. 6. 7. 8. 9.

Streaming tv service ivi ruled a threat to the industry; appeals court unanimously upholds injunction Streaming television service ivi suffered another setback this week when a federal appeals court has upheld a lower court’s temporary injunction against the controversial company. In its ruling, the U.S. Court of Appeals for the Second Circuit said that allowing ivi to resume service could “threaten to destabilize the entire industry.” (Read the ruling, below.) It also determined that ivi was not legally the same as a cable network, noting in particular that it “retransmits broadcast signals nationwide, rather than to specific local areas.” ABC, NBCUniversal, Univision, Fox Television, CBS and several other broadcasters and networks sued ivi in 2010, asserting that the startup was infringing their copyrights by live-streaming their programming without permission. In February 2011, the U.S. Related links: Ivi – New York Law Journal – Networks Prevail in Copyright Dispute Over Online Service Broadcasting & Cable – Injunction Against ivi Upheld wpix et al v ivi

How To Keep Everyone At Arm’s Length And Never Enjoy An Authentic Human Connection: An Essential Guide It can be hard living as a wholly insecure, broken person drowning under the pressures of an endless parade of perceived failures . . . and that’s why I’m here to help! If you're trying to avoid a balanced life filled with love and real connections with others, I'm here to let you know—you can realize this fantasy! You have agency! In the past few years, I’ve found other ways to live (just to keep things fresh—variety being the spice of life and all), but this blissfully tortured existence used to be mine and it seems like a waste to let two and a half decades of exacting expertise go down the tubes. 1. 2. 3. 4. 5. 6. 7. 8. 9. 10. - Eat everything in sight. - Run—but propel yourself only out of self-hatred. - Pair a six-pack with a painkiller! - Fumble around with a coworker—your impending awkward interactions in the wake of the hook-up will only give you more fodder and failures to fixate on. 11. 12. 13. 14. 15.

10 Things You Must Give Up to Be Successful post written by: Marc Chernoff Email “Don’t spend time beating on a wall, hoping to transform it into a door.” When we think about how to achieve success, we often focus on the skills and habits we should add to our lives. Give up the habit of waiting. – The way you spend your time defines who you are. And remember, the road you are traveling may be the more challenging one, but don’t lose faith. It’s okay if you don’t know how much more you can handle. Photo by: Toni Blay If you enjoyed this article, check out our new best-selling book. And get inspiring life tips and quotes in your inbox (it's free)...

18 Ways To Inspire Everyone Around You Live by choice, not by chance. Make changes, not excuses. Be motivated, not manipulated. This is the way to inspire people! Here are a few more ideas to get you started with inspiring everyone around you: Be authentic and true to yourself. – In this crazy world that’s trying to make you like everyone else, find the courage to keep being your awesome self. In the end, everything you need to inspire everyone around you is contained within you. Photo by: What’s Next Related 18 Truths to Start Telling Yourself This is your journey, and yours alone. March 22, 2012 In "Aspirations" 12 Things You Should Be Able to Say About Yourself You only live once, but if you do it right, once is enough. - Mae West You know you’re on the right track when you can repeat each of the following headlines to yourself, honestly. April 26, 2012 9 Habits of Super Positive People Life is full of positive experiences.