The Psychopath: The Mask of Sanity 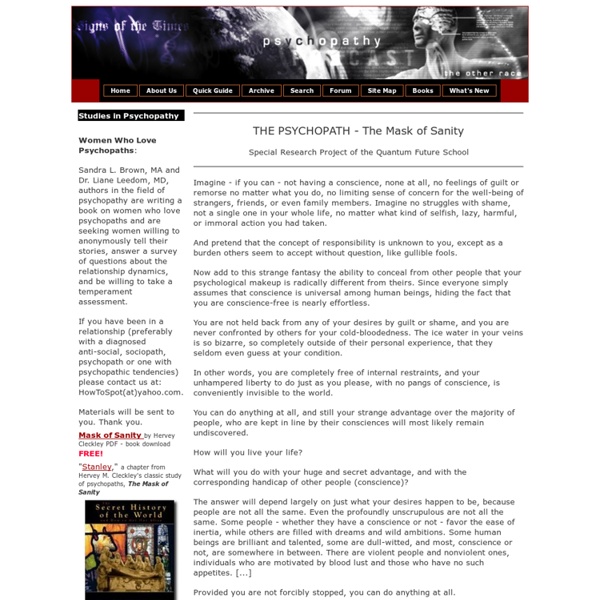 THE PSYCHOPATH - The Mask of Sanity Special Research Project of the Quantum Future School Imagine - if you can - not having a conscience, none at all, no feelings of guilt or remorse no matter what you do, no limiting sense of concern for the well-being of strangers, friends, or even family members. Imagine no struggles with shame, not a single one in your whole life, no matter what kind of selfish, lazy, harmful, or immoral action you had taken. And pretend that the concept of responsibility is unknown to you, except as a burden others seem to accept without question, like gullible fools. Now add to this strange fantasy the ability to conceal from other people that your psychological makeup is radically different from theirs. You are not held back from any of your desires by guilt or shame, and you are never confronted by others for your cold-bloodedness. How will you live your life? Provided you are not forcibly stopped, you can do anything at all. Psychopaths In the New Age I kid you not!

How narcissism got to be a thing. This article was originally posted on October 7 and 11, 2015 in two parts. It has been updated and merged. Disclaimer: It was pointed out to me that this post may seem overly critical or stereotyping of Baby Boomers. I’m aware that the selfishness and lack of empathy we see today extends across ALL generations. Levenson Self-Report Psychopathy Scale This is interactive version of the Levenson Self-Report Psychopathy Scale, a test of sociopathy. Introduction Psychopathy is a personality disorder characterized by a lack of empathy for others. The LSRP was developed in 1995 for use in psychological research. Hare Psychopathy Checklist - define, person, people, used, personality, score, traits, Definition, Purpose Definition The Hare Psychopathy Checklist-Revised (PCL-R) is a diagnostic tool used to rate a person's psychopathic or antisocial tendencies. People who are psychopathic prey ruthlessly on others using charm, deceit, violence or other methods that allow them to get with they want. The symptoms of psychopathy include: lack of a conscience or sense of guilt, lack of empathy, egocentricity, pathological lying, repeated violations of social norms, disregard for the law, shallow emotions, and a history of victimizing others. Originally designed to assess people accused or convicted of crimes, the PCL-R consists of a 20-item symptom rating scale that allows qualified examiners to compare a subject's degree of psychopathy with that of a prototypical psychopath.

The Psychopath Test The Psychopath Test: A Journey Through the Madness Industry is a 2011 book by Jon Ronson in which he explores the concept of psychopathy, along with the broader mental health "industry" including mental health professionals and the mass media. It spent the whole of 2012 on United Kingdom bestseller lists and ten weeks on the The New York Times Best Seller list.[1] Primary themes[edit] Ronson visits purported psychopaths, as well as psychologists and psychiatrists who have studied them, particularly Canadian psychologist Robert D.

The Place of "Cognitive Dissonance" in Narcissistic Victim Syndrome Understanding Cognitive Dissonance in relation to narcissistic abuse: Stockholm syndrome involves the victim paradoxically forming a positive relationship with their oppressor; this is called “Trauma Bonding”. When victims of narcissistic are suffering from Stockholm Syndrome, they are often seen by outsiders as somehow having participated in some bizarre way that seems to support their abuse.

Do Narcissists Know They Are Narcissists? Think of your friendly neighborhood narcissist. Status-seeking, grandiose, loud-mouthed, brash, and flamboyant. Have you ever noticed how he (or she) brags all the time, not only about his astronomical I.Q. and bulging pectoral muscles, but also about the fact that he is narcissistic ? It's as if he is proud of it. Lots of psychologists have theorized that a lack of self-awareness is a hallmark trait of narcissists. My personal experience with narcissists does not seem to support this.

Psychopathic Traits Linked to Brain Reward System - NIH Research Matters March 29, 2010 People who scored high on a test that measures impulsive and antisocial traits had exaggerated brain responses to certain “rewards,” like winning money or taking stimulant drugs. The new study provides evidence that a dysfunctional brain reward system may underlie vulnerability to a personality disorder known as psychopathy. Impulsive and antisocial personality traits correlate with amphetamine-induced dopamine release (red and yellow) in the brain. Image by Buckholtz et al. Psychopathy is characterized by a combination of superficial charm, manipulative and antisocial behavior, impulsivity, blunted empathy and shallow emotional experiences. Abusive parents: What do grown children owe the mothers and fathers who made their childhood a living hell? Illustration by Charlie Powell What do we owe our tormentors? It’s a question that haunts those who had childhoods marked by years of neglect and deprivation, or of psychological, physical, and sexual abuse at the hands of one or both parents. Despite this terrible beginning, many people make it out successfully and go on to build satisfying lives.

Narcissism, Psychopathy, and Evil « mind.expressions DELANY DEAN, JD, PhD delanydean.com KC Mindfulness Psychopaths vs. Sadists: Brain Science, Public Fascination Psychopathic serial killers are a source of infinite public fascination. If best-selling novels, hit TV series and popular films are any indication, you’d think real-life Hannibal Lecters were constantly running amok in the U.S. Thankfully, such offenders are far less prevalent in reality than they are in entertainment — but the disproportionate damage done by violent and even nonviolent psychopaths not surprisingly attracts intense scientific interest as well. On May 11, in fact, the New York Times explored whether psychopaths can be diagnosed as young as age 9. Another way to figure out what makes the psychopath tick is to contrast him — and they are overwhelmingly male — with other abnormal personalities.

Psychopathic Narcissism Friday the 13th turns out to have been unlucky for murder defendant Joran van der Sloot. The latest installment in the notorious case of the now twenty-four-year-old Dutchman consisted of his self-serving and disingenuous confession in a Peruvian courtroom this week. By dint of delivering this brief formal statement, van der Sloot pled guilty , and hoped to save himself from serving a far longer sentence than he would have without confessing under Peruvian law. However, today, those hopes were dashed. He was sentenced, fittingly by a panel of three female judges, to 28 years in prison.