Clearing the Mind: How the Brain Cuts the Clutter 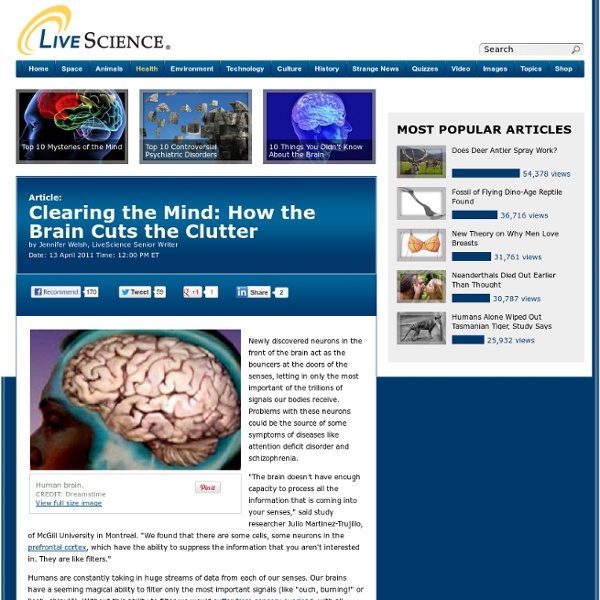 Newly discovered neurons in the front of the brain act as the bouncers at the doors of the senses, letting in only the most important of the trillions of signals our bodies receive. Problems with these neurons could be the source of some symptoms of diseases like attention deficit disorder and schizophrenia. "The brain doesn't have enough capacity to process all the information that is coming into your senses," said study researcher Julio Martinez-Trujillo, of McGill University in Montreal. "We found that there are some cells, some neurons in the prefrontal cortex, which have the ability to suppress the information that you aren't interested in. They are like filters." Humans are constantly taking in huge streams of data from each of our senses. A cluttered mind This "brain clutter," or inability to filter out unnecessary information, is a possible mechanism of diseases like attention deficit hyperactivity disorder (ADHD) and schizophrenia. Mindful monkeys

The Neurocritic: The Dark Side of Diagnosis by Brain Scan Daniel Amen: Pioneer or profiteer?: Psychiatrist Daniel Amen uses brain scans to diagnose mental illness. Most peers say that’s bonkers. Right on the heels of a Molecular Psychiatry paper that asked, "Why has it taken so long for biological psychiatry to develop clinical tests and what to do about it?" (Kapur et al., 2012) comes this provocatively titled article in the Washington Post about neurohuckster Dr. Daniel Amen and his miraculous SPECT scans: Daniel Amen is the most popular psychiatrist in America. SPECT (single photon emission computed tomography) is a relatively inexpensive cousin of PET scanning (positron emission tomography) with lower spatial resolution.1 There is no peer reviewed literature that establishes SPECT as a reliable method of diagnosing psychiatric disorders. In his Washington Post article, author Neely Tucker assembled an impressive list of naysayers: But wait! But beware! Where Are the Clinical Tests for Psychiatric Disorders? Dr. Am I blue, Dr. Footnotes

Mind-Controlled Musical Instrument Helps Paralysis Patients Rehabilitate Music Through the Mind Eduardo Miranda Paralysis patients could play music with their minds , using a new brain-control interface that senses brain impulses and translates them into musical notes. Users must teach themselves how to associate brain signals with specific tasks, causing neuronal activity that the brain scanners can pick up. Then they can make music. It’s a pretty unique use of brain-computer interfaces, which are already being used to do things like drive cars , control robots and play video games. The device was developed by Eduardo Miranda , a composer and computer-music specialist at the University of Plymouth, UK. Patients with neurodegenerative disorders like Parkinson’s or Alzheimer’s can use music to walk to a rhythm or even to trigger memories or emotions. Like other brain-computer interfaces, a user calibrates the system — and his or her brain — by learning to associate certain brain signals with a stimulus. The work is reported in the journal Music and Medicine .

Morality Study Narrows Gap Between Mind And Brain ..:: DMT - THE SPIRIT MOLECULE | DOCUMENTARY ::.. What Is CogniFit? - Mind Training Program Paul Thompson's Research Publications The brain's center of reasoning and problem solving is among the last to mature, a new study graphically reveals. The decade-long magnetic resonance imaging (MRI) study of normal brain development, from ages 4 to 21, by researchers at NIH's National Institute of Mental Health (NIMH) and University of California Los Angeles (UCLA) shows that such "higher-order" brain centers, such as the prefrontal cortex, don't fully develop until young adulthood. A time-lapse 3-D movie that compresses 15 years of human brain maturation, ages 5 to 20, into seconds shows gray matter - the working tissue of the brain's cortex - diminishing in a back-to-front wave, likely reflecting the pruning of unused neuronal connections during the teen years. Cortex areas can be seen maturing at ages in which relevant cognitive and functional developmental milestones occur. The researchers scanned the same 13 healthy children and teens every two years as they grew up, for 10 years. [1] Nitin Gogtay MD, Jay N.

What Causes Homosexual Desire - Dr. Cameron By Paul Cameron, Ph. D. Dr. Cameron is Chariman of the Family Research Institute of Colorado Springs, Colorado USA. Most of us fail to understand why anyone would want to engage in homosexual activity. The peculiar nature of homosexual desire has led some people to conclude that this urge must be innate: that a certain number of people are "born that way," that sexual preferences cannot be changed or even ended. At least three answers seem possible. Which of these views is most consistent with the facts? 1) No researcher has found provable biological or genitic differences between heterosexuals and homosexuals that weren't caused by their behavior Occasionally you may read about a scientific study that suggests that homosexuality is an inherited tendency, but such studies have usually been discounted after careful scrutiny or attempts at replication. 2) People tend to believe that their sexual desires and behaviors are learned Reasons For Preferring: homosexuality (1940s and 1970) 1.