13 Ways a Narcissistic Mother Sabotages Her Daughter's Life. Most daughter’s see their Mother as a trusted source of advice, comfort, and unconditional love. 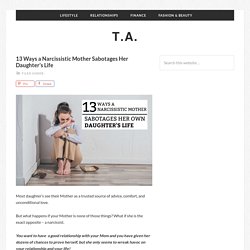 But what happens if your Mother is none of those things? What if she is the exact opposite – a narcissist. You want to have a good relationship with your Mom and you have given her dozens of chances to prove herself, but she only seems to wreak havoc on your relationship and your life! You have come to realize that everything in your relationship is one-sided. From the moment you were born, everything was about her!

Your whole life, your mother’s toxic presence in your life has damaged your self-image and overall sense of security. The Psychopath’s Relationship Cycle: Idealize, Devalue and Discard – Psychopathyawareness's Blog. Because they suffer from incurable personality disorders, psychopaths repeat over and over the same relationship cycle, no matter whom they’re dating or for how long. 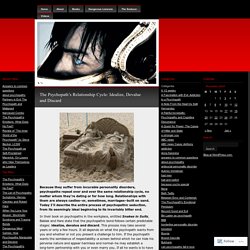 Relationships with them are always castles–or, sometimes, marriages–built on sand. Today I’ll describe the entire process of psychopathic seduction, from its seemingly ideal beginning to its invariably bitter end. Articles – Narcissistic and Emotional Abuse. No amount of makeup can cover up an ugly personality. 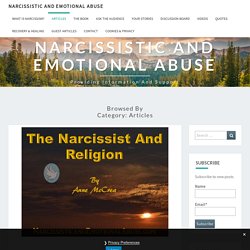 We often read stories of women being abused by men but what about the other way round? The narcissistic woman is every bit as evil as their male counterpart. What is the Narcissist Red Flag - Mirroring. With a Narcissist you are stuck between two worlds – the emotional one where you believed in their love and the debilitating one where you see the truth that it was a distorted love meant to harm you. Can Malignant Narcissists and Psychopaths Change? Why You Shouldn't Count On It. The Aftershocks Of A Relationship With A Narcissist – So Long Sociopath. Narcissist, Psychopath, or Sociopath: How To Spot The Differences. The Uncontrollable Drive to Stay Connected. Inside the Mind of a Sociopath. This excerpt is from: "The Sociopath Next Door: The Ruthless vs. the Rest of Us" by Martha Stout Ph.D. 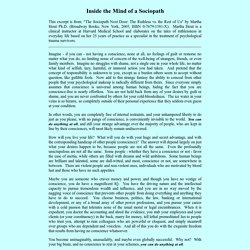 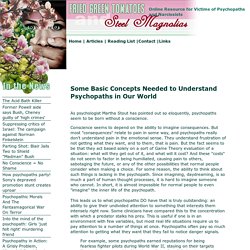 Conscience seems to depend on the ability to imagine consequences. But most "consequences" relate to pain in some way, and psychopaths really don't understand pain in the emotional sense. The Psychopath’s Emotions: What Does He Feel? So far I’ve asked you to imagine a person who lacks empathy for others and the capacity to feel any emotion deeply. 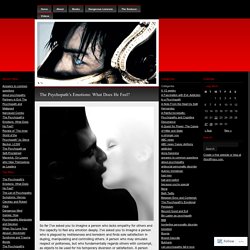 I’ve asked you to imagine a person who is plagued by restlessness and boredom and finds sole satisfaction in duping, manipulating and controlling others. A person who may simulate respect or politeness, but who fundamentally regards others with contempt, as objects to be used for his temporary diversion or satisfaction. Cluster B personality disorders - an overview. Introduction In his famous poem Cocain, the German physician and writer Gottfried Benn attributed to the substance “Den Ich-Zerfall, den süssen, tiefersehnten, den gibst Du mir” (“The ego decay, sweet, deeply desired, that is what you give to me”, translated by Boris B. 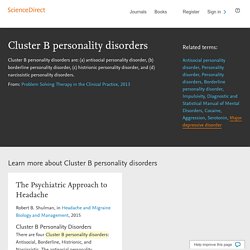 Quednow) without explaining to us whether he specifically alludes to the acute, postacute, or chronic effects of cocaine (Benn, 1917, p. 76). In fact, most users probably take cocaine in order to elevate their self-control and self-confidence rather than to destroy their egos (Boys, Marsden, & Strang, 2001; Hartwell, Back, McRae-Clark, Shaftman, & Brady, 2012). Basic Differences Between Psychopathy & Narcissistic Personality Disorder [Part I] 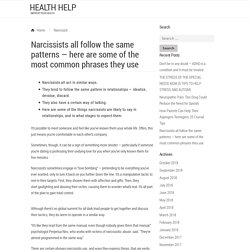 It’s possible to meet someone and feel like you’ve known them your whole life. Often, this just means you’re comfortable in each other’s company. Sometimes, though, it can be a sign of something more sinister — particularly if someone you’re dating is professing their undying love for you when you’ve only known them for five minutes.

Narcissists sometimes engage in “love bombing” — pretending to be everything you’ve ever wanted, only to turn it back on you further down the line. Psychological Murder: Death By Covert Abuse. Narcopathic Abuse Victims of this type of abuse are commonly left with no resources they can use to escape the situation; the abuser has stolen their finances, their identity and has turned the victim's own family and friends against them, due to the malicious web of lies and deceit that have been woven. 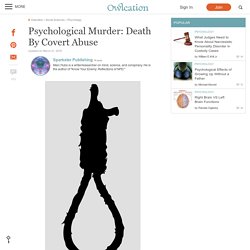 The victim is trapped with no way out... or at least that is what they are made to believe. Although victims go through what can only be described as being dragged through hell backwards, narcissistic and sociopathic abuse via heightened communication is so difficult to pick up on the human radar of perception that the victim is usually left scratching their head wondering "is it me? " They have been made to believe that they are the problem. It Could Not Have Ended Any Other Way. The Sad Truth About Why the Narcissist Seems to Hate You, But Won’t Let You Go Easily. Erased but not Forgotten: Psychopaths and Emotional Memory. Please welcome a post on psychopaths and emotional memory by our guest blogger, Michael Pacitti, who writes both from his personal experience with a psychopath and from his experience as a mental health professional. 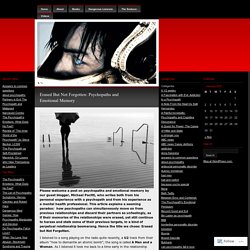 This article explains a seeming paradox: how psychopaths can simultaneously move on from previous relationships and discard their partners so unfeelingly, as if their memories of the relationships were erased, yet still continue to harass and stalk some of their previous targets, in a kind of perpetual relationship boomerang. Hence the title we chose: Erased but Not Forgotten.

I listened to a song playing on the radio quite recently, a U2 track from their album “how to dismantle an atomic bomb”; the song is called A Man and a Woman. As I listened it took me back to a time early in the relationship with my ex when her idealisation of me was in full swing. Michael Pacitti. Psychopaths - Reactions to causing pain within their intimate relationships. DO SOCIOPATHS KNOW WHAT THEY ARE DOING WHEN THEY ABUSE IN A RELATIONSHIP? Understanding How Sociopaths Think: Why It is Good to Ask Why. Sociopaths must spend their entire lives watching others and learning to imitate behaviors that they are unable to engage in naturally. So often during this recovery process, I have been told by others—those who have been targeted by sociopaths and those who have not—that it does not matter why the sociopath did what he did. Focus on you, they said. Why Sociopaths Idealize and Devalue People. Like a black hole, they will suck the energy out of you until you have nothing left to offer, then discard you and blame you because the void is still there.

Toxic people (especially narcissists, sociopaths, psychopaths) are often called "energy vampires" because they drain their targets of all natural love, joy, and sanity. Cluster-B personalities are unknowingly lost on a never ending quest to fill in internal void (often referred to as boredom, emptiness, un-feelable emotions, the rejected self). Similar to an addict, they believe that external factors will fill that void, so they are constantly looking outward for attention and adoration. Idealize, Devalue, & Discard. Why Do Narcissists Vanish And Do They Ever Come Back? Lots of people ask this question … And in todays Thriver TV episode we are going to get right down to it. And just before I do, let me say this: I promise you that when you get healed beyond this – you won’t care – but until then you will a lot.

The narcissist leaving can be devastating beyond measure. Brain Abnormalities Found in Narcissists. Narcissistic Personality Disorder Basics The American Psychiatric Association categorizes narcissistic personality disorder with a group of conditions called Cluster B personality disorders. All of these disorders produce behaviors or thought processes that rely to a dysfunctional degree on emotional excess or drama.

People affected by NPD do such things as focus their lives around self-centered pursuits, greet criticism with outsized or excessive emotional displays, manipulate others for their own purposes, redirect other people’s attention toward themselves, make unsupported boasts or exaggerations, expect others to treat them as superiors or “betters,” and develop heavily involved fantasies centered on unfounded notions of their own abilities or achievements. Unusual Brain Thinness In the study published in the Journal of Psychiatric Research, a team of German researchers used modern brain scanning technology to examine the brain structure of 34 volunteers.

The study showed that psychopaths have reduced connections between the ventromedial prefrontal cortex (vmPFC), the part of the brain responsible for sentiments such as empathy and guilt, and the amygdala, which mediates fear and anxiety. Anatomy Of A Psychopath : The Neurobiological Basis Of Evil. Brain differences of the psychopath.

Here Cleckley went over every major symptom of this dangerous personality disorder. True self and false self. Is the narcissist happier with their new supply? Affective Resonance: I Don't Feel You & You Can't Feel Me. How to Know if Someone is Hoovering You. Narcissistic Hoovering is a Timeless Control Tactic. To a narcissist, hoovering is a timeless tactic for controlling a target, validating that control, and periodically checking an ex’s queue-status. How to execute the perfect ‘hoover manoeuvre’ Soulmates In Hell: WORDS YOU SHOULD KNOW: DOSING. Triangulation: Death of a Heart By a 1000 Cuts. How narcissist’s use baiting to get an emotional reaction and why they use it. Gaslighting means altering reality. 10 Warning Signs of Word Salad. Word Salad and Narc Speak. Narcissists, Sociopaths, and Flying Monkeys. The narcissists Harem. The Deafening Brutality of the Narcissist’s Silent Treatment - Let Me Reach with Kim Saeed. Narcissistic Abuse: An Unspoken Reality (Short Documentary) –

What Makes Narcissists Tick: Blaming the Victim of Narcissism. About Covert Emotional Manipulation. Psychological Murder: Death By Covert Abuse. The Dark Side of Oxytocin, the Hormone of Love - Ethnocentrism. Abuse Victims Are Not Codependent, They're Trauma-Bonded. Psychopaths and Love. The Love Story Of A Narcissist And His Victim. Codependency & Victim Blaming: Why Abuse Is Always Wrong.

What Makes Narcissists Tick: Nonsense Check on Codependence. Little Gidding: Form Of Projection: Elaborate Denial Of Another's Trauma or Tragedy. What Makes Narcissists Tick: The Obduracy of Malignant Narcissism. Abuse recovery articles. 30 Red Flags of Manipulative People. Who Does That? - Part 2. Unless They're a Psychopath... How Multiple Compounding Complex Trauma Affect The Survivor ~ Lilly Hope Lucario. PTSD And Complex PTSD: What Happens When You’ve Lived In A Psychological War Zone – Daily Medical News.

The Behaviors, Traits, and Actions of the Narcissist – Process of Elimination: Navigating Through the Cluster B Spectrum. How Do I Know If I’m With a Narcissist? Signs That You’ve Been Abused by a Narcissist. Psych Central - Self Quiz: Am I in an Abusive Relationship? Are You a Victim of Emotional Rape? Inside The Mind Of A Girl Broken By An Emotional Psychopath. 12 Life-Impacting Symptoms Complex PTSD Survivors Endure. Complex Posttraumatic Stress Disorder (C-PTSD) symptoms and diagnostic criteria. When Complex Trauma Is Misdiagnosed as Anxiety. Papers/Herve,Hayes,Hare- Psychopathy and sensitivity to the emotional polarity of metaphorical statements.pdf at master · emintham/Papers. What is a sociopath.

Overcoming Brainwashing and the Sociopath's World of Lies. How narcissism got to be a thing. Narcissist. I see how talking about abusers with mental health professionals, can be harmful. And why ~ Lilly Hope Lucario. Complex Posttraumatic Stress Disorder (C-PTSD) symptoms and diagnostic criteria. Reading List. Family articles. Tips & Tricks To Move On After Narcissistic Abuse - Free From Toxic. Documentary on Narcissistic Personality Disorder...I am a SURVIVOR!! A Structural Theory of Narcissism and Psychopathy. Trauma and PTSD Exhaustion, Fatigue and Tiredness. Narcissism, Psychopathy, and Evil. Thoughts About Being A Narcissistic And Emotional Abuse Survivor - Freedom From Narcissistic and Emotional Abuse. The sociopath came on strong and romantic — it was all a fraud : Lovefraud.com – sociopaths, psychopaths, antisocials, con artists, bigamists. Machine learning links dimensions of mental illness to abnormalities of brain networks: Penn study pinpoints four brain-guided dimensions of psychopathology.