Father's Son Ch 1, White Collar. Chapter One: Terror It was a look FBI Special Agent Peter Burke had never seen in the eyes of his young Confidential Informant, Neal Caffrey. 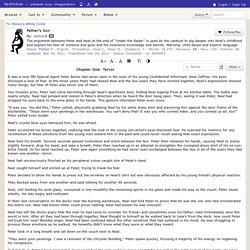 His eyes disclosed a look of fear. In the three years Peter had chased Neal and the two years they have worked together, Neal's expressions showed many things, but fear of Peter was never one of them. Two minutes prior, Peter had come barreling through Neal's apartment door, finding Neal sipping Pinot at his kitchen table. The bottle was nearly empty. "It was you. Neal's crystal blue eyes betrayed him; he was afraid. 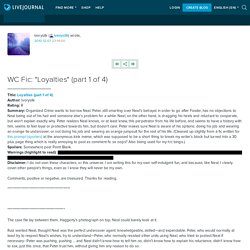 Peter, still smarting over Neal's betrayal in order to go after Fowler, has no objections to Neal being out of his hair and someone else’s problem for a while. Neal, on the other hand, is dragging his heels and reluctant to cooperate, but won’t explain exactly why. Peter realizes Neal knows, or at least knew, this perpetrator from his life before, and seems to have a history with him, seems to feel loyal or protective towards him, but doesn’t care. Peter makes sure Neal is aware of his options: doing his job and wearing an orange tie undercover, or not doing his job and wearing an orange jumpsuit for the rest of his life. 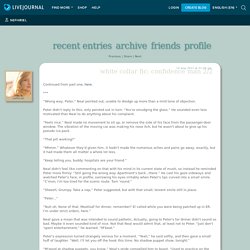 Peter didn't reply to this, only pointed out in turn: “You're smudging the glass.” He sounded even less motivated than Neal to do anything about his complaint. “Feels nice.” Neal made no movement to sit up, or remove the side of his face from the passenger-door window. The vibration of the moving car was making his nose itch, but he wasn't about to give up his pseudo ice-pack. “That pill working?” “Mhmm.” “Keep telling you, buddy: hospitals are your friend.”

Neal didn't feel like commenting on that with his mind in its current state of mush, so instead he reminded Peter more firmly: “Still going the wrong way. A Healthy Neal is a Happy Neal. Title: Care and Feeding of a Criminal Informant: A Healthy Neal is a Happy NealRating: PGCharacters: Neal, OCs, PeterWarnings: Language, sicknessSummary: Takes place during season one. 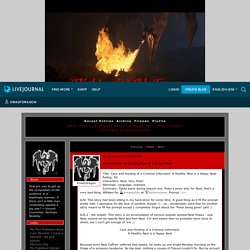 Peter's away and, for Neal, that's a very bad thing. WRitten for swanpride at collarcorner. Prompt here A/N: This story had been sitting in my hard-drive for some time. A/N 2 - the sequel: This story is an accumulation of various popular woobie! Left Ch 1, White Collar. A/N: Story is set in the summer, for reasons that will become obvious. 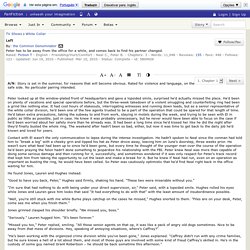 Rated for violence and language, on the safe side. No particular pairing intended. Peter looked up at the window-plated front of headquarters and gave a lopsided smile, surprised he'd actually missed the place. He'd been on plenty of vacations and special operations before, but the three-week takedown of a violent smuggling and counterfeiting ring had been a grind like nothing else. It had cost hours of stakeouts, interrogating witnesses and running down leads, but as a senior representative of the white collar division, he'd been one of the few agents trusted to be a part of the operation that could be spared for that length of time. Contact with El wasn't the only communication to lapse during the intense investigation. Stripped - katikat - White Collar. Peter noticed the tension in the office as soon as he entered it. 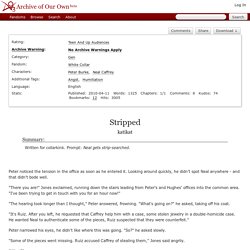 Looking around quickly, he didn't spot Neal anywhere - and that didn't bode well. "There you are! " Jones exclaimed, running down the stairs leading from Peter's and Hughes' offices into the common area. "I've been trying to get in touch with you for an hour now! " "The hearing took longer than I thought," Peter answered, frowning. Details - Chapter 1 - Fluencca - White Collar. Chapter Text Neal never thought could miss a Fed. 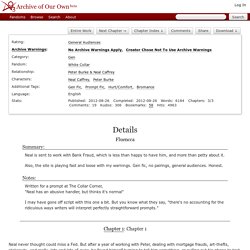 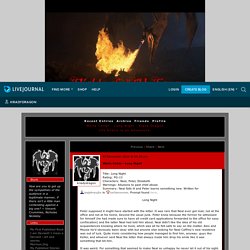 Written for kajahryujin in collarcorner. Prompt found here. Long Night Peter supposed it might have started with the letter. It was weird. Except there was also the case, the one Neal had said no to, the one that came to Peter's desk right around the time Neal got the letter. “Just got a bad feeling, is all,” Neal had said. “You know it's not viable,” Peter said. Neal had shrugged in an attempt to come off as indifferent to the matter. X_varda_x: White Collar Fic: Disdain.