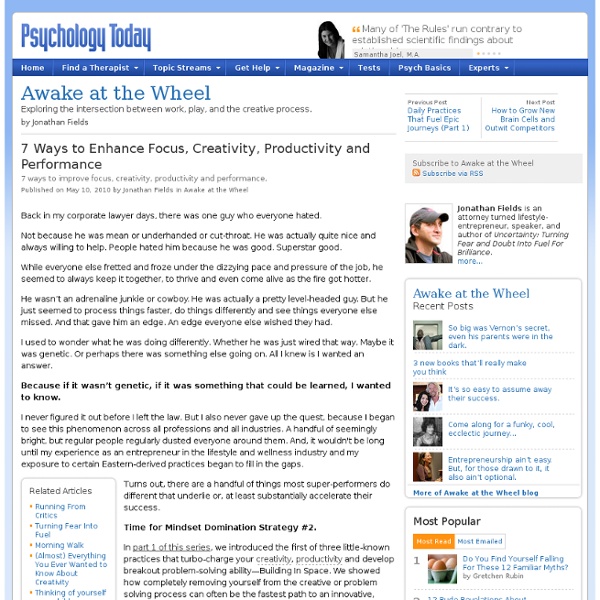 Back in my corporate lawyer days, there was one guy who everyone hated. Not because he was mean or underhanded or cut-throat. He was actually quite nice and always willing to help. People hated him because he was good. While everyone else fretted and froze under the dizzying pace and pressure of the job, he seemed to always keep it together, to thrive and even come alive as the fire got hotter. He wasn’t an adrenaline junkie or cowboy. I used to wonder what he was doing differently. Because if it wasn’t genetic, if it was something that could be learned, I wanted to know. I never figured it out before I left the law. Turns out, there are a handful of things most super-performers do different that underlie or, at least substantially accelerate their success. Time for Mindset Domination Strategy #2. In part 1 of this series , we introduced the first of three little-known practices that turbo-charge your creativity, productivity and develop breakout problem-solving ability—Building In Space.

The Cheapskate Guide: 50 Tips for Frugal Living | zen habits Post written by Leo Babauta. Follow me on Twitter. Confession time: I’m a cheapskate. I am fairly frugal (though not always), but sometimes I take it too far: I have T-shirts with holes in them, I never buy new clothes, we’re shopping for a new couch because our current one has holes in it, and I ran my current pair of running shoes until the soles fell off. However, I have gradually learned to be frugal in many ways that I would recommend to others. Why live frugally? All of which you might believe, but I believe I do have a life. So, if you’d like some tips on frugal living, here are just a few, from a cheapskate. Go with one car. —Read more about simple productivity, focus and getting great things done in my book, The Power of Less.

Welcome to Yi-Yuan Body Mind Science Dr. Yi-Yuan Tang Dr. Tang was born in China and started eastern traditional practice and training when he was very young and learned different body-mind methods and techniques from more than 20 teachers. He has been working at the universities over 20 years since he got the first faculty position in 1987. He has been a full Professor of Neuroinformatics, Neuroscience and Psychology, and the founding director and director of the first Institute of Neuroinformatics and Laboratory of Body and Mind in Chinese university since 2001. Dr. Dr. Dr. Dr.

The Power Of The Mind: How To Train Yourself To Be More Successful : Managing How can you use the latest discoveries in brain science to improve your life? Here are some techniques. November 02, 2011 Leadership tycoon Warren Bennis once said, “We seem to collect information because we have the ability to do so, but we are so busy collecting it that we haven’t devised a means of using it. There is a wealth of information at our disposal today on the latest discoveries in brain science. We can either drown in this information or turn it into a lifesaver by extracting its practical knowledge. Use visualization to learn a new skill Neuroplasticity is the ability of the brain to continuously create new neural pathways. In a Harvard University study, two groups of volunteers were presented with a piece of unfamiliar piano music. Albert Einstein, who is credited with saying that “imagination is more important than knowledge,” used visualization throughout his entire life. Achieve your goals by keeping your mouth shut Heed this information and keep your goals to yourself.

Why Self-Compassion Trumps Self-Esteem In this incredibly competitive society of ours, how many of us truly feel good about ourselves? I remember once, as a freshman in college, after spending hours getting ready for a big party, I complained to my boyfriend that my hair, makeup, and outfit were woefully inadequate. He tried to reassure me by saying, “Don’t worry, you look fine.” Juan Estey “Fine? The desire to feel special is understandable. Not very well. How can we grow if we can’t acknowledge our own weaknesses? Continually feeding our need for positive self-evaluation is a bit like stuffing ourselves with candy. The result is often devastating. And of course, the goalposts for what counts as “good enough” seem always to remain out of reach. Another way So what’s the answer? When I first came across the idea of “self-compassion,” it changed my life almost immediately. I remember talking to my new fiancé, Rupert, who joined me for the weekly Buddhist group meetings, and shaking my head in amazement. An island of calm

Exceeding Expectations As a young woman I set my expectations and created a vision of how my life would turn out. My plan included college, a fantastically successful career traveling the world as an engineering consultant, and eventually a life with Mr. Right, in a large English country house with a circular driveway, and four children (including twins.) I made it to college, then graduate school, and launched my engineering career, and that's about as far as my expectations took me. But... I found my true vocation as a writer and now I work, not in exotic locations, but at home, near the beach, in a country I love. When I look back at my expectations I realize that I probably wouldn't have been happy in the life I had so carefully planned. So often we set expectations for ourselves and when they don't work out we lament our misfortune or beat ourselves up for not achieving what we set out to do. Yes, it's Pollyanna-thinking, but for now, I'm hanging my hat on it.

Ten Principles To Live By In Fiercely Complex Times If you're like most people I work with in companies, the demands come at you from every angle, all day long, and you have to make difficult decisions without much time to think about them. What enduring principles can you rely on to make choices that reflect openness, integrity and authenticity? Here are ten that work for me: 1. 2. 3. 4. 5. 6. 7. 8. 9. 10. Reprinted from Harvard Business Review Tony Schwartz is President and CEO of The Energy Project, a company that helps individuals and organizations fuel energy, engagement, focus, and productivity by harnessing the science of high performance.

You Mean Anything Is Possible? Once there was a man named Lester Levenson. This is true; I know former students of his. One day when he was in his early forties, doctors sent him home from the hospital, giving him only a few months to live. There was nothing to be done, they said. His heart was so weak he was instructed not even to tie his own shoelaces, lest the exertion cause him to drop dead. Now Lester, being a thinking kind of guy, decided he had been stupid to have gotten himself into this position. Within a few months Lester was completely healthy and, even more astounding, had attained a state of inner peace and happiness that he had not previously imagined possible, a state he called "imperturbability." Lester stands out for me for two reasons. Second, I recall a student of Lester's once explaining to me how he and his fellow students used to go about removing the self-imposed limitations of their own minds. Whoa, their minds would go. That's what I call the Possibility Principle at work.