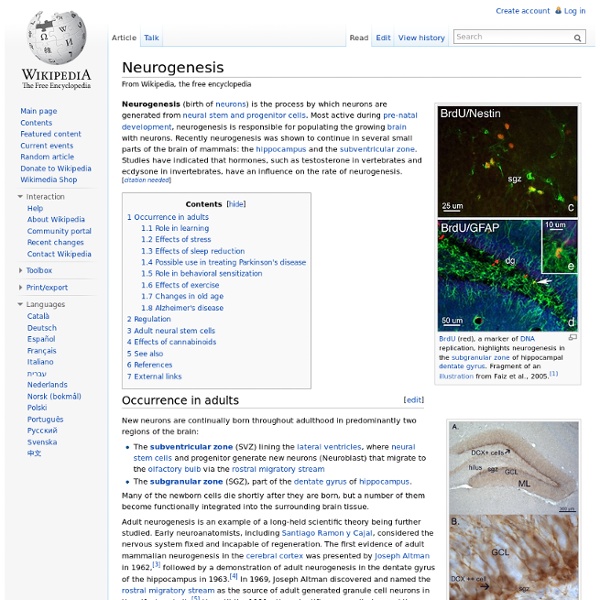 Neurogenesis (birth of neurons) is the process by which neurons are generated from neural stem cells and progenitor cells. Most active during pre-natal development, neurogenesis is responsible for populating the growing brain with neurons. Recently neurogenesis was shown to continue in several small parts of the brain of mammals: the hippocampus and the subventricular zone. Occurrence in adults[edit] New neurons are continually born throughout adulthood in predominantly two regions of the brain: Many of the newborn cells die shortly after they are born, but a number of them become functionally integrated into the surrounding brain tissue. Role in learning[edit] Effects of stress[edit] Some studies have hypothesized that learning and memory are linked to depression, and that neurogenesis may promote neuroplasticity. Effects of sleep reduction[edit] One study has linked lack of sleep to a reduction in rodent hippocampal neurogenesis. Possible use in treating Parkinson's disease[edit] Related:  Neuroscience

Researchers show that memories reside in specific brain cells Our fond or fearful memories — that first kiss or a bump in the night — leave memory traces that we may conjure up in the remembrance of things past, complete with time, place and all the sensations of the experience. Neuroscientists call these traces memory engrams. But are engrams conceptual, or are they a physical network of neurons in the brain? “We demonstrate that behavior based on high-level cognition, such as the expression of a specific memory, can be generated in a mammal by highly specific physical activation of a specific small subpopulation of brain cells, in this case by light,” says Susumu Tonegawa, the Picower Professor of Biology and Neuroscience at MIT and lead author of the study reported online today in the journal Nature. In that famous surgery, Penfield treated epilepsy patients by scooping out parts of the brain where seizures originated. False memory This light-induced freezing suggested that the animals were actually recalling the memory of being shocked.

Brain is not fully mature until 30s and 40s (PhysOrg.com) -- New research from the UK shows the brain continues to develop after childhood and puberty, and is not fully developed until people are well into their 30s and 40s. The findings contradict current theories that the brain matures much earlier. Professor Sarah-Jayne Blakemore, a neuroscientist with the Institute of Cognitive Neuroscience at University College London, said until around a decade ago many scientists had "pretty much assumed that the human brain stopped developing in early childhood," but recent research has found that many regions of the brain continue to develop for a long time afterwards. The prefrontal cortex is the region at the front of the brain just behind the forehead, and is an area of the brain that undergoes the longest period of development. Prof. Blakemore said brain scans show the prefrontal cortex continues to change shape as people reach their 30s and up to their late 40s. Explore further: Study: Our brains compensate for aging

Apoptosis In contrast to necrosis, which is a form of traumatic cell death that results from acute cellular injury, in general apoptosis confers advantages during an organism's lifecycle. For example, the separation of fingers and toes in a developing human embryo occurs because cells between the digits apoptose. Unlike necrosis, apoptosis produces cell fragments called apoptotic bodies that phagocytic cells are able to engulf and quickly remove before the contents of the cell can spill out onto surrounding cells and cause damage.[5] Research in and around apoptosis has increased substantially since the early 1990s. Discovery and etymology[edit] German scientist Carl Vogt was first to describe the principle of apoptosis in 1842. John E. In Greek, apoptosis translates to the "dropping off" of petals or leaves from plants or trees. In the original Kerr Wyllie and Currie paper, British Journal of Cancer, 1972 Aug;26(4):239-57, there is a footnote regarding the pronunciation: Process[edit]

Eidetic memory Overview[edit] The ability to recall images in great detail for several minutes is found in early childhood (between 2% and 10% of that age group) and is unconnected with the person's intelligence level.[citation needed] Like other memories, they are often subject to unintended alterations. Persons identified as having a related condition known as Highly Superior Autobiographical Memory (HSAM)[1] are able to remember very intricate details of their own personal life, but this ability seems not to extend to other, non-autobiographical information. Skeptical views[edit] The American cognitive scientist Marvin Minsky, in his book The Society of Mind (1988), considered reports of eidetic memory to be an "unfounded myth".[5] Notable claims[edit] Prodigious savants[edit] Stephen Wiltshire, MBE, a prodigious savant.[10] He is capable of drawing the entire skyline of a city after a helicopter ride.[11]Daniel Tammet, holder of the European record for reciting Pi to 22,514 digits.[12] See also[edit]

The Human Connectome Project The Human Connectome Project Human Connectome The NIH Human Connectome Project is an ambitious effort to map the neural pathways that underlie human brain function. Altogether, the Human Connectome Project will lead to major advances in our understanding of what makes us uniquely human and will set the stage for future studies of abnormal brain circuits in many neurological and psychiatric disorders. Consortia The Blueprint has funded two major cooperative agreements that will take complementary approaches to deciphering the brain's complex wiring diagram. Use the box at the right to search the consortium sites or browse the sites directly using the links below. Latest Updates The Massachusetts General Hospital and the University of California at Los Angeles consortium has built a next-generation 3T magnetic resonance imaging (MRI) scanner that improves the quality and spatial resolution with which brain connectivity data can be acquired. Washington University in St.

maya realistic man skeleton This is a legally binding agreement between licensee ("you"), and TurboSquid regarding your rights to use Stock Media Products from the Site under this license. "You" refers to the purchasing entity, whether that is a natural person who must be at least 18 years of age, or a corporate entity. The rights granted in this agreement are granted to the purchasing entity, its parent company, and its majority owned affiliates on a "royalty free" basis, which means that after a Purchase, there are no future royalties or payments that are required. Collectively, these rights are considered "extended uses", and are granted to you, subject to applicable Editorial Use Restrictions described below. Part I: Introduction & Definitions Part II: License Rights Part III: License Term and Termination Part IV: Warranties Part V: Limitation of Liability Part VI: Other Terms I. Some words in this agreement are given specific meanings. "Imagery" is a Creation made of any single image or sequence of images. II. IV.

11 Simple Ways to Improve Your Memory Whether you want to be a Jeopardy! champion or just need to remember where you parked your car, here are 11 things you can do right now to turn your mind from a sieve into a steel trap. These days we’re all about things being faster. We’ve all walked into a room and suddenly realized we can’t remember why we needed to be there in the first place. If you’re having trouble remembering things at work, get a stress ball. At this point we should just accept it that science considers exercise the cure for absolutely any problem, and memory is no different. At some point in high school or college, almost everyone has tried to pull an all-nighter before a big test (or so pop culture would have us believe). We’re all font snobs to some extent. If you need to remember a piece of information for around 30 minutes, try chewing gum. But if you have a pop quiz sprung on you, leave the Juicy Fruit in your pocket. Many people like a bit of music playing while they work or study.