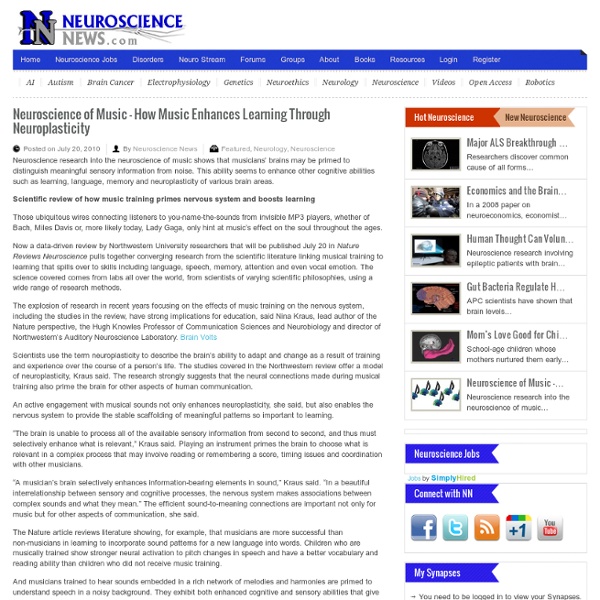 Neuroscience research into the neuroscience of music shows that musicians’ brains may be primed to distinguish meaningful sensory information from noise. This ability seems to enhance other cognitive abilities such as learning, language, memory and neuroplasticity of various brain areas. Scientific review of how music training primes nervous system and boosts learning Those ubiquitous wires connecting listeners to you-name-the-sounds from invisible MP3 players, whether of Bach, Miles Davis or, more likely today, Lady Gaga, only hint at music’s effect on the soul throughout the ages. Now a data-driven review by Northwestern University researchers that will be published July 20 in Nature Reviews Neuroscience pulls together converging research from the scientific literature linking musical training to learning that spills over to skills including language, speech, memory, attention and even vocal emotion. Contact: Pat Vaughan Tremmel Source: Northwestern University Related:  The human brain and the mind • Music

Welcome to the Possibilium Music psychology Music psychology, or the psychology of music, may be regarded as a branch of both psychology and musicology. It aims to explain and understand musical behavior and experience, including the processes through which music is perceived, created, responded to, and incorporated into everyday life.[1] Modern music psychology is primarily empirical; its knowledge tends to advance on the basis of interpretations of data collected by systematic observation of and interaction with human participants. Music psychology is a field of research with practical relevance for many areas, including music performance, composition, education, criticism, and therapy, as well as investigations of human aptitude, skill, intelligence, creativity, and social behavior. History[edit] Early history (pre-1860)[edit] Rise of an empirical music psychology (1860–1960)[edit] A brass, spherical Helmholtz resonator based on his original design, circa 1890-1900. Modern music psychology (1960–present)[edit] Research areas[edit]

Scientists claim brain memory code cracked Despite a century of research, memory encoding in the brain has remained mysterious. Neuronal synaptic connection strengths are involved, but synaptic components are short-lived while memories last lifetimes. This suggests synaptic information is encoded and hard-wired at a deeper, finer-grained molecular scale. In an article in the March 8 issue of the journal PLoS Computational Biology, physicists Travis Craddock and Jack Tuszynski of the University of Alberta, and anesthesiologist Stuart Hameroff of the University of Arizona demonstrate a plausible mechanism for encoding synaptic memory in microtubules, major components of the structural cytoskeleton within neurons. Microtubules are cylindrical hexagonal lattice polymers of the protein tubulin, comprising 15 percent of total brain protein. The standard experimental model for neuronal memory is long term potentiation (LTP) in which brief pre-synaptic excitation results in prolonged post-synaptic sensitivity.

The Soundtrack of Civilization: A Neuroscientist Looks at the Impact of Music on Human Nature Daniel Levitin dropped out of college in 1975 to join a rock band. He did it, he says, because it comforted the loneliness he felt being away from his home and friends that first year. He eventually returned to school and ended up with a Ph.D. in psychology, but not before he worked with some of the world’s most-notable rock artists as a session musician, commercial recording engineer, live sound engineer, and record producer—oh, and racking up 17 gold or platinum records along the way. Now a researcher and professor of neuroscience and music at McGill University in Montreal, Levitin combines his passion for music and the mind by peering into people’s brains to understand how we perceive and process the information in music, and theorizing about the role it played in the evolution of human culture and civilization. Levitin bases his argument on the fact that both our bodies and brains adapted from proto-humans over time. Only recently in human history has music become a profession.

Public Art Concepts - Dan Sternof Beyer 2011 Download the PDF of these ideas : Public Art Concepts - Dan Sternof Beyer 2011 (2mb) [ New American Public Art ] Is the Internet Warping Our Brains? - Technology Is this a bad thing? Not necessarily, says Sparrow. For instance, for years people in the educational community have known that rote learning—that is, forcing children to memorize facts and dates—is a poor way to educate. If that's the case, allowing computers to do some of the memorizing for us might be a way to focus more on the more philosophical aspects of learning. "Perhaps those who teach in any context, be they college professors, doctors or business leaders, will become increasingly focused on imparting greater understanding of ideas and ways of thinking, and less focused on memorization," Sparrow told Time. Of course, while you might think that this research suggests people on the internet are using less of their brains than those not online, you'd be wrong.

7 Great Sites About Music and Literature We are overloaded with media, both Web-based and hard copy. We need solid tools to help us sift through all of it, and to clue us in on the stuff that's worth paying attention to. The following sites employ user communities and new Web tools to help us do just that--and also provide forums where we can offer our own opinions. Pitchfork: One the first independent-music Web sites, and arguably still the best. Amoeba Music: This music chain's site gives you a pretty good flavor of the music that people are listening to on the Left Coast (the chain has stores in Los Angeles, San Francisco, and Berkeley, California). Other Music: And here you can find the view from the East Coast--Greenwich Village, to be exact. Metacritic: At this site you can read fresh criticism about new (mainstream) films, DVDs, music, TV, and games. Pandora: Pandora is still one of the coolest music sites around, largely because of its un­­canny ability to help you form a Web-radio playlist tailored to your tastes.

Related:
Related:  The human brain and the mind   -  Music