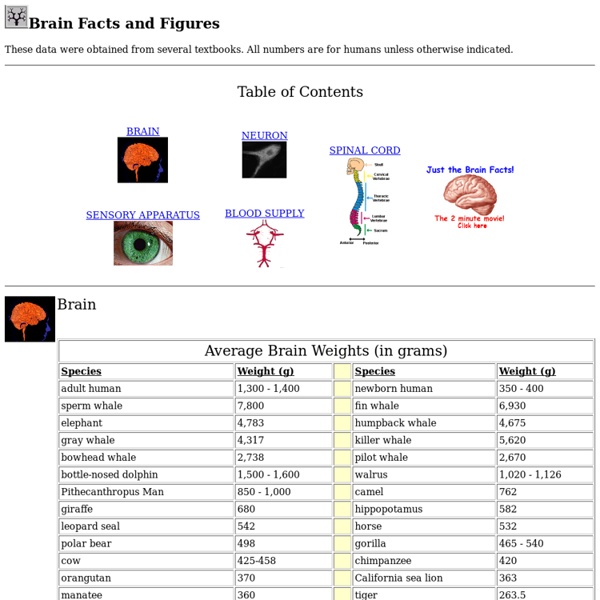 Brain Structures and Their Functions The nervous system is your body's decision and communication center. The central nervous system (CNS) is made of the brain and the spinal cord and the peripheral nervous system (PNS) is made of nerves. Together they control every part of your daily life, from breathing and blinking to helping you memorize facts for a test. Nerves reach from your brain to your face, ears, eyes, nose, and spinal cord... and from the spinal cord to the rest of your body. Sensory nerves gather information from the environment, send that info to the spinal cord, which then speed the message to the brain. The brain then makes sense of that message and fires off a response.

Neuroscience For Kids The Hows, Whats and Whos of Neuroscience The Whats What is a neuron? A neuron is a nerve cell. The brain is made up of approximately 100 billion neurons. Brain Waves The human brain is more complex than your scientists suspect. They are busily mapping where certain functions occur, and how parts of the brain activate in syncronicity. They know that parts of the brain, near the stem, are older than, for instance, the forebrain, and that a human can survive remarkably well with only half a brain, as long as that half is either the right or left, intact. But what your scientists do not know is that beyond the old brain and the new, the subconscious and the conscious, the right and the left halves - there are yet more subdivisions of the human brain.

Know Your Neurons: How to Classify Different Types of Neurons in the Brain’s Forest Previously, on Know Your Neurons:Chapter 1: The Discovery and Naming of the Neuron Chapter 2: How to Classify Different Types of Neurons, or The Dendrology of the Neuron Forest Scientists have organized the cells that make up the nervous system into two broad groups: neurons, which are the primary signaling cells, and glia, which support neurons in various ways. The human brain contains around 100 billion neurons and, by most estimates, somewhere between 10 to 50 times as many glial cells. All these cells are packed into a three-pound organ about the size of both your fists stuck together.

Cooperative Neural Networks Suggest How Intelligence Evolved Working together can hasten brain evolution, according to a new computer simulation. When programmed to navigate challenging cooperative tasks, the artificial neural networks set up by scientists to serve as mini-brains "learned" to work together, evolving the virtual equivalent of boosted brainpower over generations. The findings support a long-held theory that social interactions may have triggered brain evolution in human ancestors. "It is the transition to a cooperative group that can lead to maximum selection for intelligence," said study researcher Luke McNally, a doctoral candidate at Trinity College Dublin. Greater intelligence, in turn, leads to more sophisticated cooperation, McNally told LiveScience. [10 Fun Brain Facts]

The Brain's Highways: Mapping the Last Frontier Frontiers are in short supply. No explorer will again catch that first glimpse of the Pacific Ocean with “wild surmise,” take the first steps on the moon, or arrive first at the Challenger deep – the remotest corners of the earth are now tourist attractions. Even in science, great mysteries have fallen – life itself has gone from being the subject of metaphysical speculation about vital substances to the biophysical understanding of cellular processes. Uncharted territories, both physical and metaphorical, are hard to find. Yet there is one largely unmapped continent, perhaps the most intriguing of them all, because it is the instrument of discovery itself: the human brain.

How mapping neurons could reveal how experiences affect mental wiring This article was taken from the July 2012 issue of Wired magazine. Be the first to read Wired's articles in print before they're posted online, and get your hands on loads of additional content by subscribing online. No road, no trail can penetrate this forest. The long and delicate branches of its trees lie everywhere, choking space with their exuberant growth. No sunbeam can fly a path tortuous enough to navigate the narrow spaces between these entangled branches. All the trees of this dark forest grew from 100 billion seeds planted together. The Secrets of Your Brain's Zoom Lens Notice that, even as you fixate on the screen in front of you, you can still shift your attention to different regions in your peripheries. For decades, cognitive scientists have conceptualized attention as akin to a shifting spotlight that “illuminates” regions it shines upon, or as a zoom lens, focusing on things so that we see them in finer detail. These metaphors are commonplace because they capture the intuition that attention illuminates or sharpens things, and thus, enhances our perception of them. Some of the important early studies to directly confirm this intuition were conducted by NYU psychologist Marisa Carrasco and colleagues, who showed that attention enhances the perceived sharpness of attended patterns. In their experiment, participants saw two textured patterns presented side-by-side on a computer screen, and judged which of the two patterns looked sharper.