THE BRAIN FROM TOP TO BOTTOM 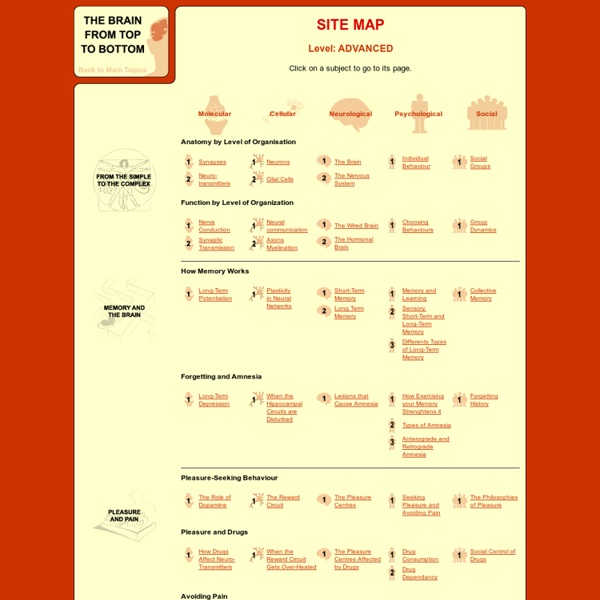 World's most detailed scans will reveal how brain works 5 March 2013Last updated at 13:27 ET By Pallab Ghosh Science correspondent, BBC News Continue reading the main story Daydream Believer: an MRI scan of the brain at rest. fpsyg.2014 1Department of Neurology, School of Medicine, University of California, Los Angeles, Los Angeles, CA, USA2Centre for Research on Ageing Health and Wellbeing, Australian National University, Canberra, ACT, Australia While overall life expectancy has been increasing, the human brain still begins deteriorating after the first two decades of life and continues degrading further with increasing age. Thus, techniques that diminish the negative impact of aging on the brain are desirable. Existing research, although scarce, suggests meditation to be an attractive candidate in the quest for an accessible and inexpensive, efficacious remedy.

Neuroscience of Music - How Music Enhances Learning - Neuroplasticity Neuroscience research into the neuroscience of music shows that musicians’ brains may be primed to distinguish meaningful sensory information from noise. This ability seems to enhance other cognitive abilities such as learning, language, memory and neuroplasticity of various brain areas. Scientific review of how music training primes nervous system and boosts learning Those ubiquitous wires connecting listeners to you-name-the-sounds from invisible MP3 players, whether of Bach, Miles Davis or, more likely today, Lady Gaga, only hint at music’s effect on the soul throughout the ages.

Short-term memory is based on synchronized brain oscillations Scientists have now discovered how different brain regions cooperate during short-term memory. Holding information within one's memory for a short while is a seemingly simple and everyday task. We use our short-term memory when remembering a new telephone number if there is nothing to write at hand, or to find the beautiful dress inside the store that we were just admiring in the shopping window.

Brain Waves The human brain is more complex than your scientists suspect. They are busily mapping where certain functions occur, and how parts of the brain activate in syncronicity. They know that parts of the brain, near the stem, are older than, for instance, the forebrain, and that a human can survive remarkably well with only half a brain, as long as that half is either the right or left, intact. But what your scientists do not know is that beyond the old brain and the new, the subconscious and the conscious, the right and the left halves - there are yet more subdivisions of the human brain. Where it is known that the brain seems to specialize in activity that requires Beta frequency brain waves during wakefulness, and Alpha frequency waves during sleep or meditation, and Theta waves during rage, and Delta waves in coma - no one is quite sure why.

Sensory substitution Sensory substitution means to transform the characteristics of one sensory modality into stimuli of another sensory modality. It is hoped that sensory substitution systems can help handicapped people by restoring their ability to perceive a certain defective sensory modality by using sensory information from a functioning sensory modality. A sensory substitution system consists of three parts: a sensor, a coupling system, and a stimulator. Spatial memory deficits in a mouse model of late-onset Alzheimer’s disease are caused by zinc supplementation and correlate with amyloid-beta levels Introduction Alzheimer’s disease (AD) is the primary cause of dementia in the elderly and currently affects more than five million Americans (Alzheimer’s Association, 2013). The present research focuses on how the biometals, such as zinc (Zn), copper (Cu), and iron (Fe), interact with amyloid beta (Aβ)—the key constituent of the plaques that are characteristic of the disease, which mediates plaque formation and consequent oxidative damage.

How to Beat the Odds at Judging Risk Most of us have to estimate probabilities every day. Whether as a trader betting on the price of a stock, a lawyer gauging a witness's reliability or a doctor pondering the accuracy of a diagnosis, we spend much of our time—consciously or not—guessing about the future based on incomplete information. Unfortunately, decades of research indicate that humans are not very good at this. Most of us, for example, tend to vastly overestimate our chances of winning the lottery, while similarly underestimating the chances that we will get divorced. Psychologists have tended to assume that such biases are universal and virtually impossible to avoid. But certain groups of people—such as meteorologists and professional gamblers—have managed to overcome these biases and are thus able to estimate probabilities much more accurately than the rest of us.

Schizophrenia diagnosis associated with progressive brain changes among adolescents Adolescents diagnosed with schizophrenia and other psychoses appear to show greater decreases in gray matter volume and increases in cerebrospinal fluid in the frontal lobe compared to healthy adolescents without a diagnosis of psychosis, according to a report in the January issue of Archives of General Psychiatry, one of the JAMA/Archives journals. “Progressive loss of brain gray matter (GM) has been reported in childhood-onset schizophrenia; however, it is uncertain whether these changes are shared by pediatric patients with different psychoses,” the authors write as background information in the study. Celso Arango, M.D., Ph.D., of the Hospital General Universitario Gregorio Marañón, Madrid, Spain, and colleagues, examined the progression of brain changes in first-episode early-onset psychosis and the relationship to diagnosis and prognosis at two-year follow-up among patients at six child and adolescent psychiatric units in Spain.