The Neuroscience of Self-Esteem, Self-Criticism and Self-Compassion 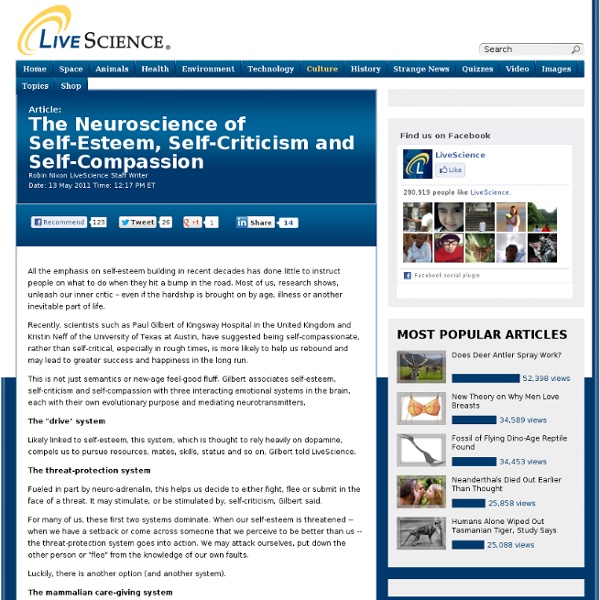 All the emphasis on self-esteem building in recent decades has done little to instruct people on what to do when they hit a bump in the road. Most of us, research shows, unleash our inner critic – even if the hardship is brought on by age, illness or another inevitable part of life. Recently, scientists such as Paul Gilbert of Kingsway Hospital in the United Kingdom and Kristin Neff of the University of Texas at Austin, have suggested being self-compassionate, rather than self-critical, especially in rough times, is more likely to help us rebound and may lead to greater success and happiness in the long run. This is not just semantics or new-age feel-good fluff. The "drive" system Likely linked to self-esteem, this system, which is thought to rely heavily on dopamine, compels us to pursue resources, mates, skills, status and so on, Gilbert told LiveScience. The threat-protection system For many of us, these first two systems dominate. Luckily, there is another option (and another system). Related:  The Neuroscience of Emotions

The Neurology Of Near-Death Experiences I've never had a patient confess to having had a near-death experience (NDE), but recently I came across a fascinating book called The Spiritual Doorway in the Brain by Kevin Nelson, M.D. that reports as many as 18 million Americans may have had one. If true, the odds are not only that some of my patients have been among them, but also some of my friends. Which got me wondering: just what does science have to tell us about their cause? That NDEs happen isn't in dispute. The sequence and type of events of which they're composed are similar enough among people who report them that NDEs could be considered a syndrome of sorts akin to a disease lacking a known cause. But just because millions of people have experienced NDEs doesn't mean the most commonly believed explanation for them—that souls leave bodies and encounter God or some other evidence for the afterlife—is correct. Neurophysiology can also explain the feeling of moving through a tunnel so commonly mentioned in NDEs.

Emotional Wiring Different in Men and Women Men and women are actually from the same planet, but scientists now have the first strong evidence that the emotional wiring of the sexes is fundamentally different. An almond-shaped cluster of neurons that processes experiences such as fear and aggression hooks up to contrasting brain functions in men and women at rest, the new research shows. For men, the cluster "talks with" brain regions that help them respond to sensors for what's going on outside the body, such as the visual cortex and an area that coordinates motor actions. For women, the cluster communicates with brain regions that help them respond to sensors inside the body, such as the insular cortex and hypothalamus. "Throughout evolution, women have had to deal with a number of internal stressors, such as childbirth, that men haven't had to experience," said study co-author Larry Cahill of the University of California Irvine. Cahill and his co-author Lisa Kilpatrick, scanned the brains of 36 healthy men and 36 healthy women.

Your Perception of Gravity Is All Relative, Study Finds | Microgravity in Space & Astronauts | Human Body & Perception In a discovery that could turn science on its head, researchers now find that you are a better judge of how objects fall when you are upright than when you lie on your side. Our senses are known to play tricks on us. For instance, we can keep our balance when our eyes are closed, but are better at doing so when we open our eyes or touch a surface. Still, is any one sense more important than the others for discerning the pull of gravity and its effects? To measure how well people gauge how objects might fall, scientists equipped 15 volunteers with laptops that showed computer-rendered pictures of vaselike objects tipped at various angles over the edge of a table and asked them to indicate whether each item would fall or right itself. The scientists found that volunteers were typically better judges of how objects fall when they were upright than when on their sides. Extreme sports are a good example." These findings might also yield insights into patients who have sensory problems.

Big Five personality traits In psychology, the Big Five personality traits are five broad domains or dimensions of personality that are used to describe human personality. The theory based on the Big Five factors is called the five-factor model (FFM).[1] The five factors are openness, conscientiousness, extraversion, agreeableness, and neuroticism. Acronyms commonly used to refer to the five traits collectively are OCEAN, NEOAC, or CANOE. The Big Five model is able to account for different traits in personality without overlapping. §Five factors[edit] A summary of the factors of the Big Five and their constituent traits, such that they form the acronym OCEAN:[4] Openness to experience: (inventive/curious vs. consistent/cautious). The initial model was advanced by Ernest Tupes and Raymond Christal in 1961[11] but failed to reach an academic audience until the 1980s. §Openness to experience[edit] §Sample items[edit] §Conscientiousness[edit] §Sample items[edit] §Extraversion[edit] §Sample items[edit] §Agreeableness[edit]

Some Strange Psychological Findings from Psych Central In their excellent book, 50 Great Myths of Popular Psychology, Lilienfeld and colleagues (2010) investigate popular psychology myths. In addition to addressing these prevalent myths, the authors briefly discuss some “difficult to believe” psychological findings. Some of the findings include: Our brains contain approximately 3 million miles of neural connections. People suffering from extreme forms of anterograde amnesia, an inability to consciously recall new information, often display implicit memories without being able to display them consciously. As an example, they may show a negative emotional reaction when interacting with a doctor who has been rude to them, even though they can’t recall meeting the doctor. People who hold a pencil with their teeth find cartoons funnier than people who hold a pencil with their lips. Research derived from U.S. In isolated areas of some Asian countries, individuals suffer from a psychological condition called “koro.” References Photo by Q.

Everyday Stress Can Shut Down the Brain's Chief Command Center The entrance exam to medical school consists of a five-hour fusillade of hundreds of questions that, even with the best preparation, often leaves the test taker discombobulated and anxious. For some would-be physicians, the relentless pressure causes their reasoning abilities to slow and even shut down entirely. The experience—known variously as choking, brain freeze, nerves, jitters, folding, blanking out, the yips or a dozen other descriptive terms—is all too familiar to virtually anyone who has flubbed a speech, bumped up against writer’s block or struggled through a lengthy exam. For decades scientists thought they understood what happens in the brain during testing or a battlefront firefight. Select an option below: Customer Sign In *You must have purchased this issue or have a qualifying subscription to access this content

Oddly, Hypocrisy Rooted in High Morals Morally upstanding people are the do-gooders of society, right? Actually, a new study finds that a sense of moral superiority can lead to unethical acts, such as cheating. In fact, some of the best do-gooders can become the worst cheats. Stop us if this sounds familiar. When asked to describe themselves, most people typically will rattle off a list of physical features and activities (for example, "I do yoga" or "I'm a paralegal"). Past research has suggested that people who describe themselves with words such as honest and generous are also more likely to engage in volunteer work and other socially responsible acts. But often in life, the line between right and wrong becomes blurry, particularly when it comes to cheating on a test or in the workplace. Why cheat? Why would a person who thinks of himself as honest cheat? A competitive playing field, whether at a university or business, can also motivate cheating behaviors. Cheating basics Overall, cheating was rampant. Cheat-proof tactics

What the science of human nature can teach us After the boom and bust, the mania and the meltdown, the Composure Class rose once again. Its members didn’t make their money through hedge-fund wizardry or by some big financial score. Theirs was a statelier ascent. They got good grades in school, established solid social connections, joined fine companies, medical practices, and law firms. You can see a paragon of the Composure Class having an al-fresco lunch at some bistro in Aspen or Jackson Hole. A few times a year, members of this class head to a mountain resort, carrying only a Council on Foreign Relations tote bag (when you have your own plane, you don’t need luggage that actually closes). Occasionally, you meet a young, rising member of this class at the gelato store, as he hovers indecisively over the cloudberry and ginger-pomegranate selections, and you notice that his superhuman equilibrium is marred by an anxiety. Help comes from the strangest places. As a newborn, Harold, like all babies, was connecting with his mother.

The neuroscience of happiness They say money can’t buy happiness. But can a better understanding of your brain? As recent breakthroughs in cognitive science break new ground in the study of consciousness — and its relationship to the physical body — the mysteries of the mind are rapidly becoming less mysterious. Shimon Edelman, a cognitive expert and professor of psychology at Cornell University, offers some insight in “The Happiness of Pursuit: What Neuroscience Can Teach Us About the Good Life.” Salon spoke with Edelman over the phone about the brain as computer, our cultural investment in happiness, and why knowing how our brains work might make us happier. In the book, you approach neuroscience from a popular perspective, using language and allegories laypeople can understand. Well, I think the principles in question are actually pretty accessible on what you call a superficial level. Well, if pursuit is the key to happiness, is this kind of happiness sustainable? That’s a really good question.

Marijuana might cause new cell growth in the brain - health - 13 October 2005 A synthetic chemical similar to the active ingredient in marijuana makes new cells grow in rat brains. What is more, in rats this cell growth appears to be linked with reducing anxiety and depression. The results suggest that marijuana, or its derivatives, could actually be good for the brain. In mammals, new nerve cells are constantly being produced in a part of the brain called the hippocampus, which is associated with learning, memory, anxiety and depression. Other recreational drugs, such as alcohol, nicotine and cocaine, have been shown to suppress this new growth. Xia Zhang of the University of Saskatchewan in Saskatoon, Canada, and colleagues decided to see what effects a synthetic cannabinoid called HU210 had on rats' brains. They found that giving rats high doses of HU210 twice a day for 10 days increased the rate of nerve cell formation, or neurogenesis, in the hippocampus by about 40%. Just like Prozac? Journal reference: Journal of Clinical Investigation (DOI:10.1172/JCI25509)

Guitarists' Brains Swing Together When musicians play along together it isn't just their instruments that are in time – their brain waves are too. New research shows how EEG readouts from pairs of guitarists become more synchronized, a finding with wider potential implications for how our brains interact when we do. Ulman Lindenberger, Viktor Müller, and Shu-Chen Li from the Max Planck Institute for Human Development in Berlin along with Walter Gruber from the University of Salzburg used electroencephalography (EEG) to record the brain electrical activity in eight pairs of guitarists. Each of the pairs played a short jazz-fusion melody together up to 60 times while the EEG picked up their brain waves via electrodes on their scalps. The similarities among the brainwaves' phase, both within and between the brains of the musicians, increased significantly: first when listening to a metronome beat in preparation; and secondly as they began to play together.

Related:
Related:  The Neuroscience of Emotions