Inside the Mind of a Sociopath 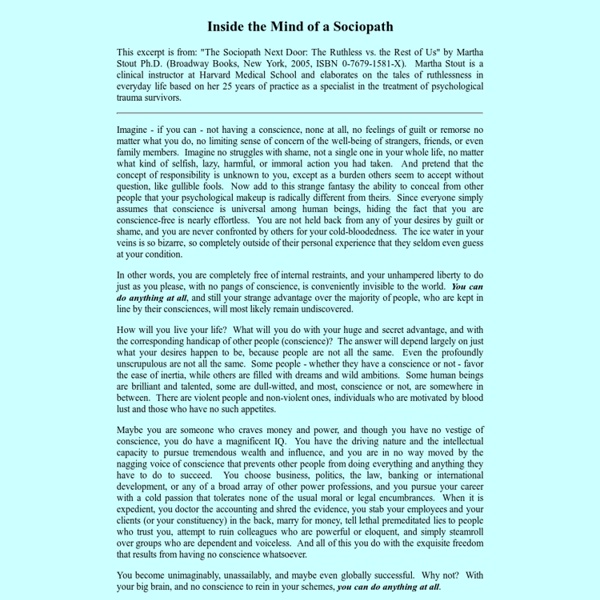 This excerpt is from: "The Sociopath Next Door: The Ruthless vs. the Rest of Us" by Martha Stout Ph.D. (Broadway Books, New York, 2005, ISBN 0-7679-1581-X). Martha Stout is a clinical instructor at Harvard Medical School and elaborates on the tales of ruthlessness in everyday life based on her 25 years of practice as a specialist in the treatment of psychological trauma survivors. Imagine - if you can - not having a conscience, none at all, no feelings of guilt or remorse no matter what you do, no limiting sense of concern of the well-being of strangers, friends, or even family members. In other words, you are completely free of internal restraints, and your unhampered liberty to do just as you please, with no pangs of conscience, is conveniently invisible to the world. How will you live your life? Maybe you are someone who craves money and power, and though you have no vestige of conscience, you do have a magnificent IQ. Or no - let us say you are not quite such a person. Caveats: Dr. Related:  Journey through Psychopath / Narcissist abuse.

The Unburdened Mind • Damn Interesting “I don’t think I feel things the same way you do.” The man sits at the table in the well-fitted attire of success—charming, witty, and instantly likeable. He is a confident, animated speaker, but he seems to be struggling with this particular point. “It’s like… at my first job,” he continues, “I was stealing maybe a thousand bucks a month from that place. And this kid, he was new, he got wise. His name is Frank, and he is a psychopath. In the public imagination, a “psychopath” is a violent serial killer or an over-the-top movie villain, as one sometimes might suspect Frank to be. “[M]y mother, the most beautiful person in the world. The word psychopathy dates back in an early form to the 19th century, but as a modern term it’s primarily used in reference to the work of Canadian psychologist Robert Hare. The psychopath’s world is a strikingly skewed one in which the normal laws of human emotion and interaction do not apply—yet it serves as reality for a sizable portion of humanity.

Spiritless Humans - Matrix (This article replaces Matrix Agents: Profiles and Analysis) Empty people. Puppet people. Cardboard cutouts. Drones. Organic Portals. Over the years I have received emails from readers who came to this same conclusion. Background The idea of empty people first dawned on me in 1999 after having done much research into sociopaths and psychopaths, their condition being medically known as APD or “Antisocial Personality Disorder.” Eventually I realized that this same root condition was present in some others who were not outwardly sociopathic, but whose lack of heart was masked by a well-adapted social exterior. But what exactly is missing in them? Behavioral and Psychic Characteristics Their behavior tends toward being glib, shallow, egotistical, narcissistic, mundane, predatory, and materialistic. Psychically scanning their consciousness reveals something interesting. Spirit: The Missing Component What to call this higher component of consciousness absent in some people? Other Components Dr.

The Greatest Epidemic Sickness Known to Humanity The following is Part One in a series. Read Part Two here. In the book Columbus and other Cannibals, indigenous author Jack D. Forbes lucidly explores a psychological disease that has been informing human self-destructive behavior that Native American people have known about for years. After reading his book, it was clear to me that he was describing the same psycho-spiritual disease of the soul that I wrote about in my book, The Madness of George W. Bush: A Reflection of our Collective Psychosis. As if performing a magic ritual, in exploring the entity of wetiko, we first have to invoke its spirit and enter into relationship with it. After evoking an entity like wetiko, in order to study it as objectively as possible, we have to hermetically seal it within an alchemical container. A Disease of Civilization Wetiko/malignant egophrenia is a disease of civilization, or lack thereof. A Parasite of a Different Order Alien Intrusion To quote Don Juan, "Indeed we are held prisoner! Vampires

Complex Post Traumatic Stress Disorder (C-PTSD) — Out of the FOG Complex Post Traumatic Stress Disorder (C-PTSD) is a condition that results from chronic or long-term exposure to emotional trauma over which a victim has little or no control and from which there is little or no hope of escape, such as in cases of: domestic emotional, physical or sexual abusechildhood emotional, physical or sexual abuseentrapment or kidnapping.slavery or enforced labor.long term imprisonment and torturerepeated violations of personal boundaries.long-term objectification.exposure to gaslighting & false accusationslong-term exposure to inconsistent, push-pull,splitting or alternating raging & hooveringbehaviors.long-term taking care of mentally ill or chronically sick family members.long term exposure to crisis conditions. When people have been trapped in a situation over which they had little or no control at the beginning, middle or end, they can carry an intense sense of dread even after that situation is removed. Difference between C-PTSD & PTSD C-PTSD Characteristics

Why Sociopaths Idealize and Devalue People Like a black hole, they will suck the energy out of you until you have nothing left to offer, then discard you and blame you because the void is still there. Toxic people (especially narcissists, sociopaths, psychopaths) are often called "energy vampires" because they drain their targets of all natural love, joy, and sanity. Cluster-B personalities are unknowingly lost on a never ending quest to fill in internal void (often referred to as boredom, emptiness, un-feelable emotions, the rejected self). Article Author: Peace

How to execute the perfect ‘hoover manoeuvre’ | Avalanche of the soul A Quick Guide to Hoovering for the determined domestic abuse perpetrator – and those of us determined to make that permanent break from our abuser. I’m an abuser. Why do I need to hoover? Yes, ordinarily you have a woman to do the vacuuming. But if you wish to keep her at the kitchen sink, you’ll need some ‘hoovering‘ skills of your own. To successfully hoover, you need to leave your shame and compassion at the door. A tough-looking hoover (photo by earl53) Phase One: Diffuse and deflect This phase of the hoovering campaign may mean you have to bite down some of your pride. Apologise for your abusive behaviour, without actually meaning it. Ensure she knows that she is incapable of surviving without you – your careful conditioning of her throughout the relationship will be helpful here. Phase Two: Love-bomb The bombardment phase is not for the easily discouraged. Note and emulate this lego-man’s determined expression (photo by pasukaru76) Call continually. Phase three: Emotional blackmail

Psychological Murder: Death By Covert Abuse | Owlcation Narcopathic Abuse Victims of this type of abuse are commonly left with no resources they can use to escape the situation; the abuser has stolen their finances, their identity and has turned the victim's own family and friends against them, due to the malicious web of lies and deceit that have been woven. The victim is trapped with no way out... or at least that is what they are made to believe. Although victims go through what can only be described as being dragged through hell backwards, narcissistic and sociopathic abuse via heightened communication is so difficult to pick up on the human radar of perception that the victim is usually left scratching their head wondering "is it me?" They have been made to believe that they are the problem. Not only that, they will do it with the person the victim suspects the least.... time and time again. In many cases the victim may turn to drugs or alcohol as a means of escape. Psychological Murder

A Painful Incredulity: Psychopathy and Cognitive Dissonance | Psychopathyawareness's Blog Almost everyone involved with a psychopath goes through a phase (and form) of denial. It’s very tough to accept the sad reality that the person who claimed to be your best friend or the love of your life is actually a backstabbing snake whose sole purpose in life is humiliating and dominating those around him. Rather than confront this reality, some victims go into denial entirely. They aren’t ready to accept any part of the truth, which, when suppressed, often surfaces in anxiety, projection and nightmares. At some point, however, the evidence of a highly disturbed personality shows through, especially once the psychopath is no longer invested in a given victim and thus no longer makes a significant effort to keep his mask on. However, even then it’s difficult to absorb such painful information all at once. Cognitive dissonance is a painful incredulity marked by this inner contradiction in the victim’s attitude towards the victimizer. The denial itself can take several forms.

Why Me | SociopathHell.Com If this is your first visit to my site, Welcome! Welcome to a place of safety, non-judgement and a place to start healing. A place where others, many others, have been right where you are at this very moment. By being here, right now, you have taken the first step to a new you. It’s very normal for your world to be perfect and the next hour it’s as though an explosion has rocked your world. Every new person to this life change, should be aware of what they might expect in the coming moments to months. You may have any one to all of the following thoughts and emotions: ConfusionShockLoss of self worthFeeling you could have prevented the break-upWeight loss or gain.Deep heartacheAngerBuckets of tearsFeeling like you’re in mourningRevengeFearFeeling of dreadNot wanting to get out of bedHide from the worldAbusedBetrayalStill in love with the SociopathThe need to call and try to make him see how much you and he / she belong together. I invite you to peruse my site at your own pace. Like this: