The Brain: A Body Fit for a Freaky-Big Brain 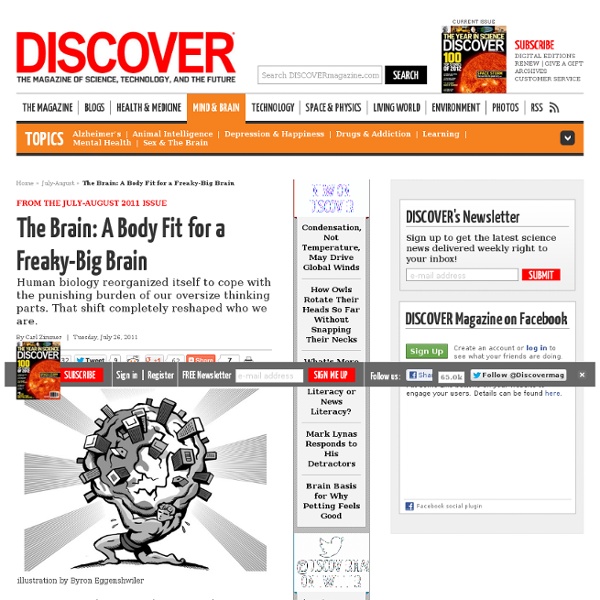 Aiello and Wheeler noted that this dramatic increase in brain size would seem to have required a dramatic increase in metabolism—the same way that adding an air-conditioning system to a house would increase the electricity bill. Yet humans burn the same number of calories, scaled to size, as other primates. Somehow, Aiello and Wheeler argued, our ancestors found a way to balance their energy budget. As they expanded their brains, perhaps they slimmed down other organs. The scientists compared the sizes of organs in humans and other primates. Aiello and Wheeler christened their idea “the expensive tissue hypothesis.” Then William Leonard, a biological anthropologist at Northwestern University, put the expensive tissue hypothesis to a new test. This suggested that the gut-shrinking phenomenon within the primate groups was probably too subtle to explain our increase in brain size completely. Wray and his colleagues compared SLC2A1 in humans and other animals. Related:  Neuroscience

The Secrets of Your Brain's Zoom Lens Notice that, even as you fixate on the screen in front of you, you can still shift your attention to different regions in your peripheries. For decades, cognitive scientists have conceptualized attention as akin to a shifting spotlight that “illuminates” regions it shines upon, or as a zoom lens, focusing on things so that we see them in finer detail. These metaphors are commonplace because they capture the intuition that attention illuminates or sharpens things, and thus, enhances our perception of them. Some of the important early studies to directly confirm this intuition were conducted by NYU psychologist Marisa Carrasco and colleagues, who showed that attention enhances the perceived sharpness of attended patterns. Subsequent studies by Carrasco’s group and others found that attention also enhances perception of other features – for example, color saturation , orientation , and speed . Are you a scientist who specializes in neuroscience, cognitive science, or psychology?

The 'rich club' that rules your brain - life - 02 November 2011 Not all brain regions are created equal – instead, a "rich club" of 12 well-connected hubs orchestrates everything that goes on between your ears. This elite cabal could be what gives us consciousness, and might be involved in disorders such as schizophrenia and Alzheimer's disease. As part of an ongoing effort to map – the full network of connections in the brain – Martijn van den Heuvel of the University Medical Center in Utrecht, the Netherlands, and Olaf Sporns of Indiana University Bloomington scanned the brains of 21 people as they rested for 30 minutes. The researchers used a technique called diffusion tensor imaging to track the movements of water through 82 separate areas of the brain and their interconnecting neurons. "These 12 regions have twice the connections of other brain regions, and they're more strongly connected to each other than to other regions," says Van den Heuvel. Members of the elite Best connected of all is the precuneus, an area at the back of the brain.

Exceptional Memory Explained: How Some People Remember What They Had for Lunch 20 Years Ago Researchers from the University of California, Irvine reported in 2006 on a woman named Jill Price who could remember in great detail what she did on a particular day decades earlier. James McGaugh, Larry Cahill and Elizabeth Parker put the woman through a battery of tests and ascertained that she was not using any of the memory tricks that have been known to mnemonists for millennia. Word got out, the media descended and the lab now receives calls every day from people who say they have the same ability as Price. A question that has persisted about this line of research is whether the brains of these people are distinct from the organs of others who can’t remember yesterday’s lunch, let alone trivial events from 20 years back. “There seems to be this extreme organizational capacity, kind of like the tricks that mnemonists use,” says Howard Eichenbaum, a Boston University professor who is editor of the journal Hippocampus. Source: University of California, Irvine

Everyday Stress Can Shut Down the Brain's Chief Command Center The entrance exam to medical school consists of a five-hour fusillade of hundreds of questions that, even with the best preparation, often leaves the test taker discombobulated and anxious. For some would-be physicians, the relentless pressure causes their reasoning abilities to slow and even shut down entirely. The experience—known variously as choking, brain freeze, nerves, jitters, folding, blanking out, the yips or a dozen other descriptive terms—is all too familiar to virtually anyone who has flubbed a speech, bumped up against writer’s block or struggled through a lengthy exam. For decades scientists thought they understood what happens in the brain during testing or a battlefront firefight. In recent years a different line of research has put the physiology of stress in an entirely new perspective. The response to stress is not just a primal reaction affecting parts of the brain that are common to a wide array of species ranging from salamanders to humans. Select an option below:

The Singularity is Far: A Neuroscientist's View David J. Linden is the author of a new book,The Compass of Pleasure: How Our Brains Make Fatty Foods, Orgasm, Exercise, Marijuana, Generosity, Vodka, Learning, and Gambling Feel So Good. He is a professor of neuroscience at The Johns Hopkins University School of Medicine and Chief Editor of the Journal of Neurophysiology. Ray Kurzweil, the prominent inventor and futurist, can't wait to get nanobots into his brain. "By the late 2020s, nanobots in our brain, that will get there noninvasively, through the capillaries, will create full-immersion virtual-reality environments from within the nervous system. Of course, there's no reason why these nanobots must be restricted in their manipulations to the sensory portions of the brain. At that point, boundaries between brain, mind, and machine would fall away. Image: Harris KM, Fiala JC, Ostroff L. I am a neurobiologist and I have spent the past 28 years engaged in studies of the cellular and molecular basis of memory and cognition.

Where is The Mind?: Science gets puzzled and almost admits a non-local mentalscape. This will be the last "home-produced" blog entry for a while [save the short "Everyday Spirituality" which will follow it as a sign-off] . West Virginia beckons tomorrow morning and off I will go to whatever that entails. As I said in one of the commentary responses the other day, I hope that reading two journal runs "cover-to-cover" will bring up a few thoughts worth sharing. This day's entry was inspired by two articles bumped into coincidentally which had scientists puzzling about a holographic universe and a non-local mind. The first of these articles [both from the New Scientist] was "Where in the World is the Mind?" That brings in the second serendipitous article. It reminded me then, also, of a moment when I was able to spend a [too short] time with David Bohm, the famous theoretical physicist. I am happy to be [in body] a holographic projection of force dimensions--not from the "edge" of the universe but its core reality.

Personality Traits Correlate With Brain Activity Your personality says a lot about you. To categorize people by their disposition, psychologists have long relied on questionnaires. Now, however, researchers may be closing in on a tangible view of character in the brain. Even at rest, the brain hums with neural activity. Using functional MRI, the researchers monitored the resting state of 39 healthy participants and looked for regions that tended to activate together. Because the brain activity only correlated with the traits, Milham says it is too soon to tell whether the patterns reflect the neural embodiment of personality.

The Mind's Hidden Switches: Scientific American Podcast Podcast Transcription Meet Dr. Bechard Nor, pioneer transplant surgeon and one of the many achievers helping to unlock human potential at Cutter Foundation. Steve: Okay, how do you do this again? You press this button, no wait. Nestler: The ability of this chronic social stress to produce maladaptive changes in brain and behavior are mediated through epigenetic modifications of gene expression in particular emotional centers of the brain. Steve: That's Eric Nestler. Steve: The old nature versus nurture thing is very simplistic. Nestler: Yes, I think that's true. Steve: You come at this from a particular vantage point, because you're an addiction researcher. Nestler: Yes. Steve: But the findings that your lab generated would apply to great many biological phenomena. Nestler: That's right. Steve: So, let's talk about the nuts and bolts of the research. Nestler: Right. Steve: Right and development is the clearest example. Nestler: It's the best established by far. Steve: Right. Nestler: Exactly.

Making Sense of the World, Several Senses at a Time Our five senses–sight, hearing, touch, taste and smell–seem to operate independently, as five distinct modes of perceiving the world. In reality, however, they collaborate closely to enable the mind to better understand its surroundings. We can become aware of this collaboration under special circumstances. In some cases, a sense may covertly influence the one we think is dominant. Our senses must also regularly meet and greet in the brain to provide accurate impressions of the world. Seeing What You Hear We can usually differentiate the sights we see and the sounds we hear. Beep Baseball Blind baseball seems almost an oxymoron. Calling What You See Bats and whales, among other animals, emit sounds into their surroundings—not to communicate with other bats and whales—but to “see” what is around them. Let Your Fingers Do The Hearing People who are both deaf and blind are incredibly good at using other senses such as touch to navigate and understand the world. Do You Have Synesthesia?