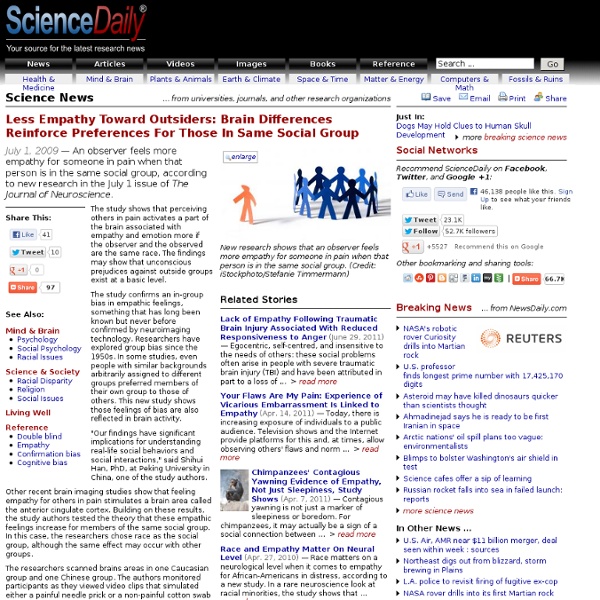 An observer feels more empathy for someone in pain when that person is in the same social group, according to new research in the July 1 issue of The Journal of Neuroscience. The study shows that perceiving others in pain activates a part of the brain associated with empathy and emotion more if the observer and the observed are the same race. The findings may show that unconscious prejudices against outside groups exist at a basic level. The study confirms an in-group bias in empathic feelings, something that has long been known but never before confirmed by neuroimaging technology. "Our findings have significant implications for understanding real-life social behaviors and social interactions," said Shihui Han, PhD, at Peking University in China, one of the study authors. Other recent brain imaging studies show that feeling empathy for others in pain stimulates a brain area called the anterior cingulate cortex. But the finding raises as many questions as it answers, Farah said.

The Science of Why We Don't Believe Science Illustration: Jonathon Rosen "A MAN WITH A CONVICTION is a hard man to change. Tell him you disagree and he turns away. Festinger and several of his colleagues had infiltrated the Seekers, a small Chicago-area cult whose members thought they were communicating with aliens—including one, "Sananda," who they believed was the astral incarnation of Jesus Christ. Through her, the aliens had given the precise date of an Earth-rending cataclysm: December 21, 1954. Festinger and his team were with the cult when the prophecy failed. Read also: the truth about Climategate.At first, the group struggled for an explanation. From that day forward, the Seekers, previously shy of the press and indifferent toward evangelizing, began to proselytize. In the annals of denial, it doesn't get much more extreme than the Seekers. The theory of motivated reasoning builds on a key insight of modern neuroscience (PDF): Reasoning is actually suffused with emotion (or what researchers often call "affect").

Deindividuation The Misconception: People who riot and loot are scum who were just looking for an excuse to steal and be violent. The Truth: You are are prone to losing your individuality and becoming absorbed into a hivemind under the right conditions. Source: Improv Everywhere When a crowd gathers near a suicidal jumper something terrible is unleashed. In Seattle in 2001, a 26-year-old woman who had recently ended a relationship held up traffic for a little too long as she considered the implications of leaping to her death. As motorists began to back-up on the bridge and become irate, they started yelling “Jump, bitch, jump!” Cases like this aren’t unusual. In 2008, a 17-year old man jumped from the top of a parking garage in England after 300 or so people chanted for him to go for it. In San Francisco, in 2010, a man stepped onto the ledge of his apartment window and contemplated dropping from the building. Within a crowd like this many will retain their sense of right and wrong. Source: El Destructo

Exploding head syndrome Exploding head syndrome (EHS) is a form of hypnagogic auditory hallucination and is a rare and relatively undocumented parasomnia event in which the subject experiences a loud bang in their head similar to a bomb exploding, a gun going off, a clash of cymbals, ringing, an earthquake, or any other form of loud, indecipherable noise that seems to originate from inside the head. This noise usually happens at the onset of sleep or within an hour or two of falling asleep, but is not necessarily the result of a dream.[1] Although the sound is perceived as extremely loud, it is usually not accompanied by pain. Attacks appear to change in number over time, with several attacks happening in a space of days or weeks, followed by months of remission. Sufferers often feel a sense of fear and anxiety before and after an attack, accompanied by elevated heart rate. Causes[edit] Related phenomena[edit] These loud noises are a common feature of out-of-body experiences. Symptoms[edit] See also[edit] Notes

Consistently Inconsistent Robert Kurzban's Why Everyone (Else) Is a Hypocrite: Evolution and the Modular Mind is a book about how our brains are composed of a variety of different, interacting systems. While that premise is hardly new, many of our intuitions are still grounded in the idea of a unified, non-compartmental self. Why Everyone (Else) Is a Hypocrite takes the modular view and systematically attacks a number of ideas based on the unified view, replacing them with a theory based on the modular view. Chapter 1: Consistently Inconsistent (available for free here) presents evidence of our brains being modular, and points out some implications of this. As previously discussed, severing the connection between the two hemispheres of a person's brain causes some odd effects. But what happens when you ask the patient to explain why they pointed to those objects in particular? Now one asks, what did ”the patient” think was going on? Not convinced by weird cases of brain damage?

Sleep Paralysis: page 2 Sleep Paralysis as an Anomalous REM and Dreaming: A major distinction of sleep states, for close to a half century, has been accepted between REM and NREM sleep (Aserinsky & Kleitman, 1953; Jouvet, 1967). REM periods are characterized by desynchronized cortical characterized by low-voltage fast EEG patterns with synchronized hippocampal activity characterized by slow (4-8 Hz) theta activity (e.g., Culebras, 1994). It is also widely accepted that dreaming is more common and more vivid during REM than during NREM sleep (Dement & Kleitman, 1957). In addition to the characteristic desynchronized cortical low-voltage fast EEG activity, there are numerous physiological, behavioral, and sensory features associated with REM such as muscle atonia, gating of sensory input, rapid eye and middle ear movements, as well as heart rate and respiration changes (Carskadon & Dement, 1989; Symons, 1993). Back to Table of Contents

Karpman drama triangle Classic drama triangle[1] The drama triangle is a psychological and social model of human interaction in transactional analysis (TA) first described by Stephen Karpman, M.D., in his 1968 article "Fairy Tales and Script Drama Analysis".[3] The drama triangle model is used in psychology and psychotherapy.[4][5] The three roles[edit] The model posits three habitual psychological roles (or roleplays) which people often take in a situation: Of these, the rescuer is the least obvious role. ... the Victim is not really as helpless as he feels, the Rescuer is not really helping, and the Persecutor does not really have a valid complaint.[6] The situation plays out when a situation arises and a person takes a role as victim or persecutor. Melodrama often features a central, triangle cast. The game is similar to the melodrama of hero, villain, and damsel in distress (such as Dudley Do-Right, Snidely Whiplash, and Nell Fenwick). Rescuer[edit] Overview and theory[edit] See also[edit] References[edit]