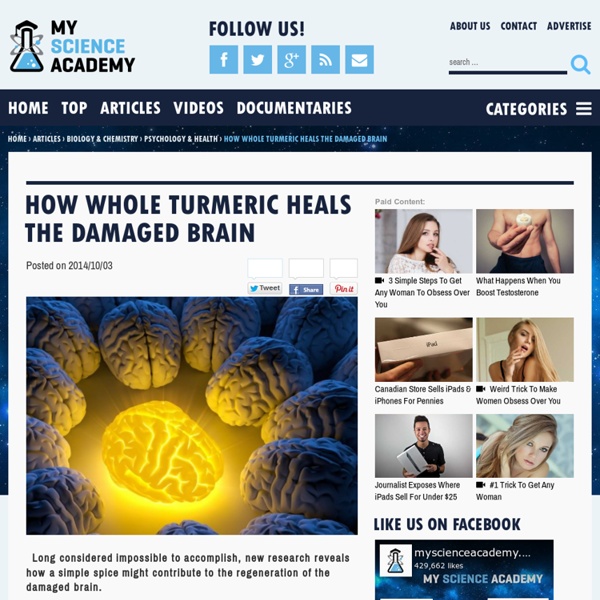 Long considered impossible to accomplish, new research reveals how a simple spice might contribute to the regeneration of the damaged brain. Turmeric is hands down one of the, if not the, most versatile healing spice in the world with over 600 experimentally confirmed health benefits, and an ancient history filled with deep reverence for its seemingly compassionate power to alleviate human suffering. But, most of the focus over the past decade has been centered on only one of its many hundreds of phytocompounds: namely, the primary polyphenol in turmeric known as curcumin which gives the spice its richly golden hue. This curcumin-centric focus has lead to the development of some very good products, such as phospholipid bound curcumin concentrate (e.g. Meriva, BCM-95) which greatly helps to increase the absorption and bio-activity of curcumin. Truth be told, there is no singular ‘magic bullet’ in foods and herbs responsible for reproducing the whole plant’s healing power.

25 Super Health Benefits of Delicious, Natural, Creamy …What?! - Page 2 of 4 Photo credit: bigstock.com You’re super health conscious, so you avoid butter because it causes heart disease, right? Time to bone up on your reading and learn the facts about butter. Study Shows New Diet Lowers Risk of Alzheimer’s A new diet, known by the acronym MIND, has been found to significantly reduce a person’s risk of developing Alzheimer’s disease (AD), even when the diet is not strictly followed, according to new research published in Alzheimer’s & Dementia: The Journal of the Alzheimer’s Association. The MIND (Mediterranean-DASH Intervention for Neurodegenerative Delay) diet is a hybrid of the Mediterranean and DASH (Dietary Approaches to Stop Hypertension) diets, both of which have been found to reduce the risk of cardiovascular conditions, including hypertension, heart attack and stroke. The diet was developed by nutritional epidemiologist Martha Clare Morris, Ph.D., of Rush University in Chicago, and her colleagues. According to the study findings, the MIND diet was able to lower the risk of AD by as much as 53 percent in participants who strictly adhered to the diet, and by about 35 percent in those who followed it fairly well. “I think that will motivate people.” Source: Psych Central

Sugar Harms Your Brain Health, Drives Alzheimer’s Epidemic By Dr. Joseph Mercola Guest Writer for Wake Up World Coconut Water Kefir can help heal the gut, improve immune function and prevent cancer. Here is how to make it! Coconut water kefir is basically fermented coconut water. It is an unbelievably rich probiotic drink that also contains really high amounts of vitamins, minerals, and electrolytes. The vitamin and mineral content of coconut water includes beta carotene, Riboflavin, Thiamin, Niacin, pantothenic acid, folates and vitamins A,B6, C, E and K. Don't throw out your kitchen scraps. Here are 6 tips for replanting your scraps to grow a new crop Pssssttt! Want to know a secret? Some of those kitchen scraps you throw out -- the base of your celery, green onions, and romaine lettuce -- can actually be grown into new plants. Yes, new plants!

Dementia Risk Linked with Common Medications Monday, June 20, 2016 By: Linda J. Dobberstein, Chiropractor, Board Certified in Clinical Nutrition Drugs like Benadryl, Coumadin, Sominex, Klonopin, Detrol, Flexeril, Lasix, and Elavil have something in common. They are in the class of anticholinergic medications. The use of these drugs affects the neurotransmitter acetylcholine, the memory neurotransmitter. There is a growing body of evidence with researchers and healthcare providers questioning how safe anticholinergic medications are with long-term use and its impact on those 55 years of age and older. Detox Your Liver with This Tropical Turmeric Cleanser Green Smoothie Your liver is one of the most important organs in your body. It is the filter of the body, helping you get rid of toxins that you may consume throughout the day. Take some time to learn more about your liver and you will understand why taking good care of it is so important. One of the best ways to help your liver function the way that it is supposed to is by eating the right mix of foods. There are several foods that you can consume to help your liver keep your body running smoothly at all times. Some ingredients that you may want to consider adding to your next smoothie to help cleanse your liver include: lemon juice, ginger, and turmeric.

Take your vegetable garden to new heights with these 5 tips about arch gardening Growing squash, zucchini, watermelons, and pumpkins in your garden is incredibly fun. It's great to watch the gorgeous yellow blossoms turn into fruit and grow to fantastic sizes. But the vines do tend to take over your garden space often growing through fences you try to put up and dominating any other plants within their reach. There's a solution to this that is incredibly creative and adds a beautiful touch to your garden. Instead of letting these vining plants take over the ground, teach them to grow upwards and voila!

Defeating aging, and the avenues ahead of us: Part 2 With a clear way forward, what are we waiting for? If we get this done, then we can probably live indefinitely. Can humans be so mentally slothful and negligent that they would be able to do all kinds of things on microscopic scales and yet not be able to clear damage out of biology? Possibly The Healthiest Cookie In The World: How To Make Chocolate Avocado Cookies Yes, there is such a thing as “healthy cookies”! And these do not contain any artificial sweeteners added, so be careful. Instead of butter, for these chocolate cookies you need avocado. Sounds crazy, right?

13 free garden design plans Whether you've just moved into a new home or you just want to update the landscaping on the property where you've lived for years, predesigned garden plans are a simple way to get the look you want without the muss and fuss of research. Great plans include good flower combinations, sizes, and ideal planting areas. The beautiful garden design plans in this article are all free! Check out one of the 13 tutorials for the stunning designs for your next garden project and save yourself hours of planning and research: 1. Curb AppealOne of the most neglected areas of the yard is the front grass closest to the road. Compound In Cannabis Shown To Remove Toxic Alzheimer’s Protein From The Brain By Alanna Ketler, Collective Evolution An active compound found in the cannabis plant called tetrahydrocannabinol, more commonly known as THC, has recently been found to promote the removal of toxic clumps of amyloid beta protein in the brain, which are thought to be precursors to Alzheimer’s disease. These findings support the results of previous studies, which found evidence of the protective effects of cannabinoids, including THC, on patients with the neurodegenerative disease. According to senior paper author David Schubert, of the Salk Institute for Biological Studies in California, “Although other studies have offered evidence that cannabinoids might be neuroprotective against the symptoms of Alzheimer’s, we believe our study is the first to demonstrate that cannabinoids affect both inflammation and amyloid beta accumulation in nerve cells.” What Exactly Is Alzheimer’s Disease? The Study