The 6 Most Horrifying Lies The Food Industry is Feeding You 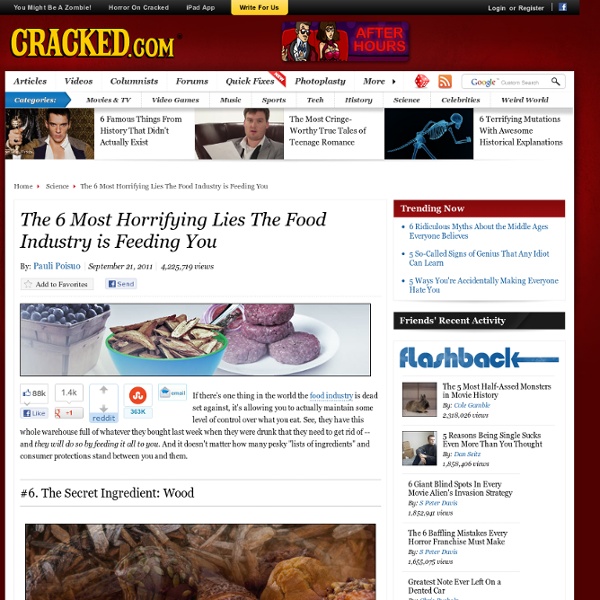 If there's one thing in the world the food industry is dead set against, it's allowing you to actually maintain some level of control over what you eat. See, they have this whole warehouse full of whatever they bought last week when they were drunk that they need to get rid of -- and they will do so by feeding it all to you. And it doesn't matter how many pesky "lists of ingredients" and consumer protections stand between you and them. #6. You know what's awesome? "But Cracked," you inquire, "what does this have to do with food ingredients?" GettyFor the purposes of this article, you're kind of an idiot. And we look at you squarely in the eye, then slowly bring our gaze upon the half-eaten bagel in your hand. Oh, shit ... The Horror: What do they do with all the cellulose wood pulp? GettyThe best part of waking up, is wood pulp in your face! And everybody's doing it. Schuym1Et tu, Hot Pockets? But the worst thing about cellulose is not that it's everywhere. #5. And why not believe them? #4.

U.S. School District to Begin Microchipping Students (NaturalNews) A Rhode Island school district has announced a pilot program to monitor student movements by means of radio frequency identification (RFID) chips implanted in their schoolbags. The Middletown School District, in partnership with MAP Information Technology Corp., has launched a pilot program to implant RFID chips into the schoolbags of 80 children at the Aquidneck School. Each chip would be programmed with a student identification number, and would be read by an external device installed in one of two school buses. The buses would also be fitted with global positioning system (GPS) devices. Parents or school officials could log onto a school web site to see whether and when specific children had entered or exited which bus, and to look up the bus's current location as provided by the GPS device. The American Civil Liberties Union (ACLU) has criticized the plan as an invasion of children's privacy and a potential risk to their safety. Brown disputed this argument.

The 6 Most Horrifying Lies The Food Industry is Feeding You #3. Fake Berries Imagine a blueberry muffin. GettyOne muffin, you greedy bastards. Even with your freshly gained knowledge that there may or may not be some cellulose in the cake mix, it's pretty impossible not to start salivating at the thought. GettyWe could taste delicious if we wanted to. Everything is better with blueberries -- that's why they put them in so many foods. The Horror: ... not that it would do any good, as the number of blueberries you've eaten within the last year that have actually come from such a field is likely pretty close to zero. GettyWe can almost hear the muffins mocking us. Studies of products that supposedly contain blueberries indicate that many of them didn't originate in nature. They do a damn good job of faking it, too -- you need a chemist's set of your own to be able to call bullshit. Natural News TVNothing says "nature" like petrochemical-derived food coloring. Kelloggs This is somewhat recognizable. GettyAll but three of these are made of plastic. #2. #1.

Rick Warren, Tony Blair & The New World Order « . . . and the world hears them Roger Oakland, of Understand the Times International, attended Rick Warren’s ‘Peace in a Globalized Society’ forum, featuring Tony Blair, that was held Monday night. As an eyewitness account, Oakland gives the following report: On March 7, 2011, Roger Oakland, founder ofUnderstand the Times, International, and two other members from his ministry attended the Peace in a Globalized Society forum at Saddleback Church in Lake Forest, California, which featured Rick Warren and special guest, former UK prime minister Tony Blair. Roger Oakland and his co-workers obtained eye-witness seats at the event that included well over 2000 people in attendance. Although cameras and recorders were not allowed in the main sanctuary where the interview took place, the UTT team took notes. What Oakland and his team heard caused them much concern – thus the reason for this special report. Both Blair and Warren have a vision to see churches with like-minded vision planted all over the world. Notes: 1.

Praise YaHuWaH - Spiritual Cleansing - Seekers of YHWH Readers Journal-archive Peak Oil and Soil (Eric Andrews, August 1, 2007) We’re discussing the value of soil especially in the context of Peak Oil, the devil is in the details. There are two parts to this: First is that readers may not realize the gravity of the situation concerning food and Peak Oil. There is a wing of the Peak Oil argument that statistically demonstrates how food presently can be said to be a form of oil. In fact, there is less than a week’s supply of food in the entire food chain, while consumers—in contrast to America before 1960--hold less than a week’s worth of food at home. The “Green Revolution”, which ended the famines of the 70’s, could arguably be said to be a result of eating oil. This is the true and verifiable situation, easily discovered with an afternoon’s research at www.theoildrum.com or www.lifeaftertheoilcrash.net. As a gardener from old-time farming country, however, I can provide another perspective. But suppose this part cannot be helped. Who loses in all this?

The Revelation @ The Forbidden Knowledge . com 'Dirty dozen' produce carries more pesticide residue, group says Environmental group says "Dirty Dozen" of produce contains 47 to 67 pesticides per servingGovernment says consuming pesticides in low amounts is not harmfulStudies have found association between pesticides and health problems Is enough being done to protect us from chemicals that could harm us? Watch "Toxic America," a special two-night investigative report with Sanjay Gupta, M.D., June 2 and 3 at 8 p.m. ET on CNN. (CNN) -- If you're eating non-organic celery today, you may be ingesting 67 pesticides with it, according to a new report from the Environmental Working Group. The group, a nonprofit focused on public health, scoured nearly 100,000 produce pesticide reports from the U.S. Most alarming are the fruits and vegetables dubbed the "Dirty Dozen," which contain 47 to 67 pesticides per serving. "It's critical people know what they are consuming," the Environmental Working Group's Amy Rosenthal said. Special report: Toxic America The Dirty Dozen Celery Peaches Strawberries Apples Nectarines

The Dying God | The Hidde History of Western Civilization Michael Pollan on "Food Rules: An Eater's Manual" This is a rush transcript. Copy may not be in its final form. MICHAEL POLLAN: The way we eat has changed more in the last fifty years than in the previous 10,000. The modern supermarket has, on average, 47,000 products. ERIC SCHLOSSER: We’ve never had food companies this powerful in our history. UNIDENTIFIED MAN 1: Everything we’ve done in modern agriculture is to grow it faster, fatter, bigger, cheaper. UNIDENTIFIED MAN 2: If you can grow a chicken in forty-nine days, why would you want one you’ve got to grow in three months? MICHAEL POLLAN: When you go through the supermarket, there is an illusion of diversity. UNIDENTIFIED WOMAN: Sometimes you look at a vegetable and say, “OK, well, we can get two hamburgers for the same price.” MICHAEL POLLAN: They have managed to make it against the law to criticize their products. ERIC SCHLOSSER: I find it incredible that the FDA wants to allow the sale of meat from cloned animals without any labeling. UNIDENTIFIED MAN 2: Smells like money to me!