Intelligence is Overrated: What You Really Need To Succeed 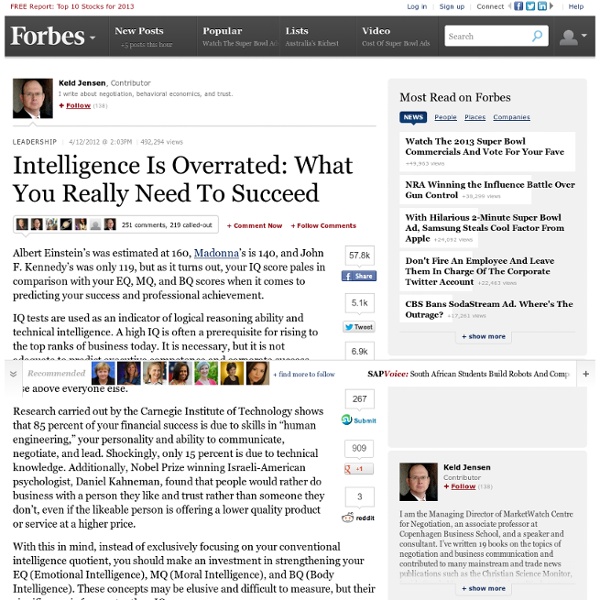 Why you get the dizzies when standing up too fast Men's Health If you're seeing stars when you get out of bed in the morning, it's probably not because you slept with Halle Berry last night. There's actually a name for that dizziness you sometimes get when you go from laying down or sitting to standing up: orthostatic hypotension (OH). A little momentary brain static might seem like nothing, but according to a new study from the University of North Carolina at Chapel Hill, OH is linked to heart failure. Could it be a danger sign for your health? What causes dizziness Franz Messerli, M.D., a physician who directs the hypertension programs at St. Do You Really Have High Blood Pressure? This process is often so precise and automatic that you won't notice any difference when you decide to go vertical. Hidden dangers So should you be worried? And then there's a more sinister explanation: In the new study, researchers at UNC-Chapel Hill looked at data from a different, long-term study on heart disease risk factors. Are you at risk?

Berries Delay Memory Decline in Adults “Among women who consumed two or more servings of strawberries and blueberries each week we saw a modest reduction in memory decline. This effect appears to be attainable with relatively simple dietary modifications,” said Harvard researcher Elizabeth Devore of the Channing Laboratory. Jon Chase/Harvard Staff Photographer Many of you probably knew that eating fresh berries and fruit was good for you; but how good was a question left unanswered, until now. Berries are good for you, that’s no secret. “What makes our study unique is the amount of data we analyzed over such a long period of time. The research team used data from the Nurses’ Health Study — a cohort of 121,700 female, registered nurses between the ages of 30 and 55 — who completed health and lifestyle questionnaires beginning in 1976. Findings show that increased consumption of blueberries and strawberries was associated with a slower rate of memory decline in older women. Image: Jon Chase/Harvard Staff Photographer

Does sugar make you stupid? Study suggests it sabotages learning and memory Fructose is commonly added to processed foods such as soft drinksIt was found to hamper memory and slow brain activity By Claire Bates Published: 09:12 GMT, 16 May 2012 | Updated: 00:08 GMT, 17 May 2012 Stay off the sweet stuff: Fizzy drinks contain high amounts of fructose which slows the brain Too much sugar could be making you stupid, according to researchers. The suggestion follows tests in the laboratory comparing high-fructose corn syrup, which is six times sweeter than cane sugar and a common ingredient in processed foods, with omega-3 fatty acids, known to aid memory and learning. In an experiment on rats, one group had a sugary diet for six weeks and another was fed healthily. At the start of the study, published in the Journal of Physiology, the University of California team tested how well the rats navigated a maze – placing landmarks to help them learn the way. Six weeks later, the researchers tested the rats’ ability to recall the route.

Herbs To Remove Skin Tags Go to your kitchen and you will find a handful of easy remedies for skin tags. Dr. Katherine Lim, a dermatologist at the Arizona satellite of Minnesota's Mayo Clinic, described skin tags in a 2008 edition of Mayo's "Medical Edge Newspaper Column." Lim says skin tags are harmless and painless but annoying and cosmetically unsightly. Skin care specialists at SkinTagHelp.com recommend a baking soda cure. If you have tea tree oil in your pantry, use a few drops three times a day for 14 days for the same results. Soak a cotton ball in apple cider vinegar, and tape it in place for 15 minutes three times a day. Home remedy researchers writing for FatFreeKitchen.com suggest that skin tags, warts and moles all respond in similar ways to the juices of a variety of common kitchen vegetables. Dr.

Two glasses of wine a day for middle-aged adults 'makes your life better' Those who drink in moderation have score better for on index measuring dexterity, emotion, and mobility By Daily Mail Reporter Published: 02:41 GMT, 25 June 2012 | Updated: 07:14 GMT, 25 June 2012 Drinking a couple of glasses of wine each day improves your quality of life, researchers say. They found that those who drink in moderation had better scores in an index that measures factors including dexterity, emotion, mobility and the ability to understand than those who abstained completely. U.S. researchers from the Boston University School of Medicine studied 5,404 people at the age of 50, and continued to observe them over a follow-up period. Those who drink in moderation scored better for dexterity, emotion and mobility, according to research Most showed a stable pattern of alcohol consumption and ‘persistent moderate drinkers’ were identified. The authors write: ‘Overall, this study shows a positive relation between regular moderate alcohol intake and quality of life in middle-aged adults.’

How PTSD took over America In the past 30 years, post-traumatic stress disorder has gone from exotic rarity to omnipresent. Once chiefly applied to wartime veterans returning from combat, it is now a much more common diagnosis, still linked to traumatic events but now including those occurring outside the battle zone: the death of a loved one on a hospital bed, a car crash on the highway, an assault in the neighborhood park. Many would argue that this is a good thing: greater recognition of psychologically distressing events will lead to more people seeking treatment and a decrease in the preponderance of PTSD – a win-win. Stephen Joseph disagrees. In his new book, “What Doesn’t Kill Us,” the professor of psychology, health and social care at the University of Nottingham (in the U.K.) warns that our culture’s acceptance of PTSD has become excessive and has led to an over-medicalization of experiences that should be considered part of ordinary, normal, human experience. How would you define a traumatic event?

Are tummy bugs the secret to a long life? Suggests varied diet could ward off host of ills By Fiona Macrae Published: 22:25 GMT, 16 July 2012 | Updated: 06:30 GMT, 17 July 2012 They have long been associated with upset stomachs. But tummy bugs could hold the secret to a healthy old age. Researchers have linked the trillions of ‘friendly bacteria’ that live in the gut to the health of men and women aged 60-plus following a landmark study. With the food eaten affecting the types of bugs that thrive, the study suggests something as simple as eating a varied diet rich in fruit and vegetables could help ward off a host of ills from frailty to memory loss. Secret to a healthy old age? The researchers said: ‘This work gives people strong motivation not to just give granny enough calories and vitamins – diversify it because you are feeding the bacteria in granny’s intestine.’ Suggested foods include fruits such as apples and grapes, as well as nuts, bean sprouts, oily fish and wholegrain bread and cereals.

Why you shouldn't lie-in once you're retired - too much sleep 'can bring on dementia' Too much sleep 'can bring on dementia' By Sophie Borland Published: 16:00 GMT, 16 July 2012 | Updated: 07:17 GMT, 17 July 2012 If you’re planning to take it easy in retirement, be careful. Too many lie-ins could be bad for your brain. Scientists believe that those who restrict themselves to seven hours a night can prevent their brain from ageing by an extra two years, compared with those who get too much shut-eye – or not enough. American researchers found that older women who managed seven hours a night had far better concentration and memories than those who slept for nine hours. Rise and shine: Seven hours of good-quality sleep is ideal, say scientists Those who got less than five hours were also found to suffer. The academics believe those who suffer cognitive decline – leaving them less sharp in old age – may be more prone to dementia. There is already evidence that having more than seven hours of sleep a night can lead to weight gain and increase the risk of heart problems and diabetes.

Why drinking red wine helps keep pensioners steady on their feet By Fiona Macrae Published: 15:47 GMT, 19 August 2012 | Updated: 23:53 GMT, 19 August 2012 Recommended: Drinking red wine in old age could improve brittle bones Red wine isn’t usually associated with being steady on your feet. But a ‘miracle ingredient’ in it could have that effect on pensioners, scientists claim. They say that resveratrol, which is already credited with a host of health benefits from cutting cholesterol to warding off cancer, boosts balance and improves mobility. In tests, old mice that were given the plant chemical for a few weeks became just as sprightly as young animals. If resveratrol has similar effects on the human body, it could help prevent the painful falls and fractures from which many pensioners struggle to recover. Falls are one of the leading causes of death in the over-75s, and half of elderly women die within two years of a fall. ‘That would therefore increase an ageing person’s quality of life and decrease their risk of hospitalisation due to slips and falls.’