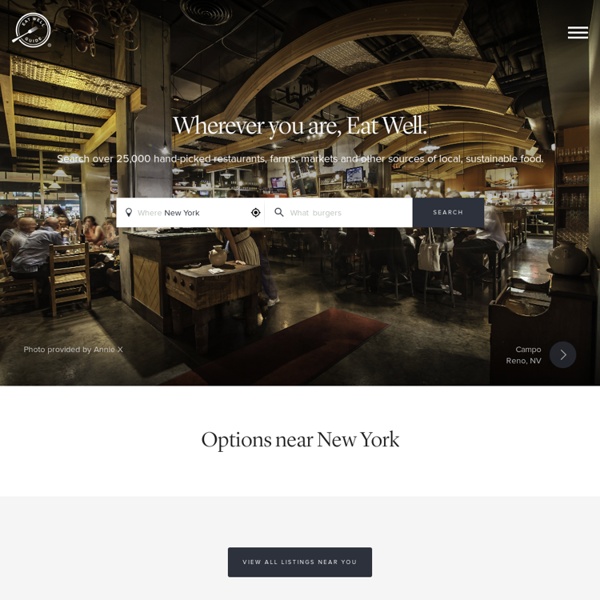 Up On The Roof: Vegetables! The bagged organic baby mixed greens on sale in my local Whole Foods Market in Bethesda, MD, are not very “green” at all. To grow the lettuce, vast amounts of water must be moved from the Colorado River to California, the most hydrologically altered landmass on the planet. The lettuce is picked, packaged, washed and shipped in refrigerated trucks (because it’s perishable) roughly 2,800 miles across America.

Meghalaya villagers create 'living' bridges by training roots across a river By Daily Mail Reporter Updated: 15:35 GMT, 10 September 2011 Deep in the rainforests of the Indian state of Meghalaya, bridges are not built, they’re grown. Ancient vines and roots of trees stretch horizontally across rivers and streams, creating a solid latticework structure strong enough to be used as a bridge. Ancient solution: The 'double decker' living tree root bridge in the village of Nongriat in Meghalaya, India.

History - Growing Home, Inc. Growing Home was founded in 1996 by Les Brown, then the Policy Director at the Chicago Coalition for the Homeless, in order to provide job training for needy Chicagoans. Les recognized that not only was the critical lack of living-wage jobs one of the major factors that leads to homelessness, but that a sense of purpose was also a necessary component of breaking out of the cycle of homelessness. Founder, Les Brown Les wrote before he passed away in 2005 that “homeless people are often without roots. They’re not tied down, not connected, not part of their family anymore. Our organic farming program is a way for them to connect with nature—to plant and nurture roots over a period of time.

Environmental Working Group Launches Novel Food Scoring Database The Environmental Working Group has released Food Scores: Rate Your Plate, a tool that looks at your food from every health angle. The database, which is also available as a mobile app, rates 80,000 foods from 1,500 brands. The scoring system includes nutrition and ingredients of concern such as additives and contaminants.

Reinvention of the Humble Tomato Tasting — Seed Savers Exchange On Labor Day weekend, Seed Savers Exchange (SSE) hosts its annual Tomato Tasting event, drawing upwards of 1,000 people to come and marvel at the incredible wealth of flavors, textures and form inherent with tomato diversity. Heritage varieties from SSE’s Collection are on experiential display, inviting visitors to interact with these rare fruits—many of which are openly available through the Online Seed Exchange. Due to the popularity of our on-site Tomato Tasting, and the wild success of last year’s Apple Tasting event in Des Moines, we had the idea to hit the road with our tomatoes. As we began developing plans for a Tomato Tasting Block Party at the Tiny Diner in Minneapolis, we got inspired to expand beyond our initial vision for an off-site outreach effort. We saw potential to let the appreciation of heirloom varieties go hand in hand with locally based seed stewardship.

Plant an Edible Forest Garden Related Content Plant Edible Ground Cover You can sneak a few attractive, low maintenance food plants onto your lawn, and your neighbors will ... Panarchy Panarchy What is Panarchy? Panarchy is a conceptual framework to account for the dual, and seemingly contradictory, characteristics of all complex systems – stability and change. It is the study of how economic growth and human development depend on ecosystems and institutions, and how they interact. Urban Farms Take Root SAN DIEGO, California - Juxtapose the word urban in front of farm and there’s bound to be a lot of head scratching. But in cities around the U.S. small-scale farms and garden plots are coming to life in unlikely places. Abandoned city lots, and neglected yards are being converted into vegetable gardens - as basic food literacy becomes part of the vocabulary of city dwellers. Due to a faltering economy and numerous food scares, many U.S. households are asking two basic questions: ‘Where does my food come from?’ Followed by, ‘How do we pay for it?’ The recently established New Roots farm located in San Diego is part of an unusual experiment among food activists to bring sustainable agriculture within city limits.

Fluster Buster: Household Tips: 26 Uses for Mint (WWII Series) When I hear the word mint, it makes me think of tea, desserts, lamb and my favorite, Mojito's, but it has never made me think of household tips. That is until we started putting together this list of household uses for mint. Much to my amazement, one of my favorite herbs can do so much more than just flavor my food and drinks. Mint is among many of the herbs that offer healing properties to many ailments and can be used around the house to solve common household problems. Hill Country Herbalist: Making Infused Oils One of the basic components in making natural homemade products that are good for you and nutrient rich is infused oils. Infused oils can be any one of your favorite carrier oils, i.e., extra virgin olive oil, jojoba oil, sweet almond oil, grapeseed oil, etc. I typically use extra virgin olive oil for it's long shelf life, but many people rely on grapeseed oil for its light texture and affordability. Mindy Green recommends olive oil and coconut oil for a longer shelf life and I agree. So, what's an infused oil? An infused oil involves taking herbs/plant matter that you've identified as having certain desirable properties (such as soothing to skin)and infusing it in the carrier oil over a period of time so that the essence of the plant gets transferred into the oil - much like the process of making a delicious cup of tea.