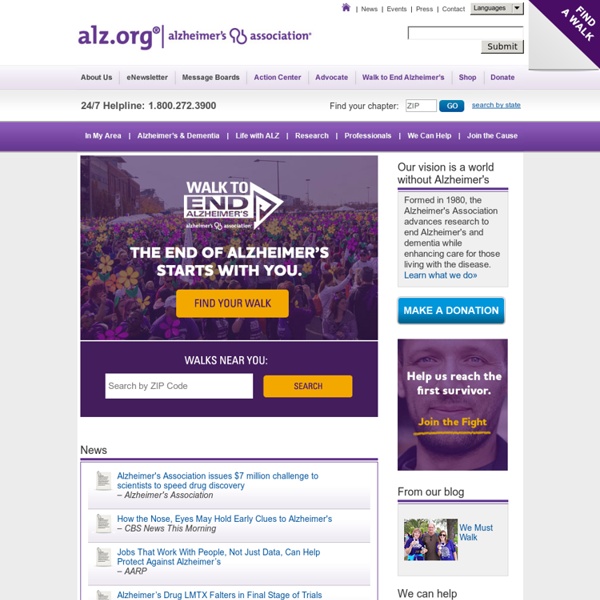 Alzheimers Lane, nobody -- but nobody -- is arguing that peroxynitrite isn't involved at multiple points in the Alzheimer's pathology cascade. This is not news. This has been known for well over 15 years. And, coincidentally, studies to determine whether and how this knowledge might be converted into interventions to prevent or treat Alzheimer's have been conducted for that long, as well. In fact, peroxynitrite generation is a general pathogenic mechanism involved at multiple points in a very wide range of disorders including stroke, myocardial infarction, chronic heart failure, diabetes, circulatory shock, chronic inflammatory diseases, cancer, and a variety of neurodegenerative disorders (e.g., Parkinson's disease, Alzheimer's disease, Huntington's disease, multiple sclerosis (MS), and amyotrophic lateral sclerosis (ALS), just to mention a few.) It's only 109 pages long.

Alzheimer's may be a collection of diseases that should be treated separately Deciphering the mechanism that underlies the development of Alzheimer's disease in certain families but not in others, researchers at the Hebrew University of Jerusalem's Faculty of Medicine have proposed that the malady is actually a collection of diseases that probably should be treated with a variety of different approaches. Neurodegenerative diseases are incurable and debilitating conditions that result in degeneration or death of cells in the nervous system. Conditions such as prion disorders (the most famous of which is "Mad Cow Disease"), Alzheimer's Disease and Parkinson's Disease share two key features: they emerge as a result of aberrant protein folding and aggregation, and their onset is late in life. These maladies emerge either sporadically or as familial, mutation-linked illnesses (certain prion disease can be also infectious). These finding raised the question of what mechanisms are negatively regulated by aging, allowing the emergence of neurodegeneration in the elderly.

Alzheimer's disease Introduction Alzheimer's disease affects the brain, causing memory problems and eventually severe problems with mental function. It gets worse in stages, and people with Alzheimer's have gradual memory loss as well as loss of judgment, trouble concentrating, loss of language skills, personality changes, and a decline in the ability to learn new tasks. In advanced stages, people with Alzheimer's can lose all memory and mental abilities. Poor sleep linked to toxic buildup of Alzheimer's protein, memory loss Sleep may be a missing piece in the Alzheimer’s disease puzzle. Scientists at the University of California, Berkeley, have found compelling evidence that poor sleep – particularly a deficit of the deep, restorative slumber needed to hit the save button on memories – is a channel through which the beta-amyloid protein believed to trigger Alzheimer’s disease attacks the brain’s long-term memory. “Our findings reveal a new pathway through which Alzheimer’s disease may cause memory decline later in life,” said UC Berkeley neuroscience professor Matthew Walker, senior author of the study to be published Monday, June , in the journal Nature Neuroscience. Excessive deposits of beta-amyloid are key suspects in the pathology of Alzheimer’s disease, a virulent form of dementia caused by the gradual death of brain cells.

Alzheimers Originally posted by: Kathleen H Dear Only Child, Welcome to the online community! Thank you for taking the time to write concerning your mother. Magnesium ions show promise in slowing progression of Alzheimer's disease in mice New research published in the December 2015 issue of The FASEB Journal, shows that in mouse models of the disease oral administration of magnesium-L-threonate (MgT) alleviated cognitive decline by suppressing the Aβ deposition in amyloid plaques in an APH-1α/1β-dependent manner. Although questions still remain about how MgT permeates the blood-brain barrier, the work suggests that scientists may have found the key to a new series of Alzheimer's disease treatments. Specifically, they show that magnesium ions target pharynx defective (APH)-APH-1α/1β-suppressing the A? deposition in amyloid plaques in an anterior pharynx defective (APH)-APH-1α/1β-dependent manner. "We hope that our findings will help improve clinical practice pertinent to the optimal administration of Mg2+ for delaying or even preventing the onset of AD," said Pu Wang, Ph.D., a researcher involved in the work from the Department of Life Science and Health at Shenyang, Liaoning, China.

AHA: Overtreatment May Up Dementia Risk in Afib Action Points Note that this study was published as an abstract and presented at a conference. These data and conclusions should be considered to be preliminary until published in a peer-reviewed journal.In patients with atrial fibrillation who are receiving antiplatelet and anticoagulant therapies, the percent of time exposed to over-anticoagulation appears to increase the risk of dementia. Alzheimer’s Disease Completely Reversed In One Week In Mice Using New Protein Injection - RiseEarth by Arjun WaliaCollective Evolution Last year, a team of Australian researchers used a non-invasive ultrasound to assist in removing toxic plaque and lesions from nerve cells commonly associated with the onset of Alzheimer’s disease. This was a big breakthrough, as the researchers were able to reverse the processes commonly associated with the onset of Alzheimer’s, you can read more about that here. This time, researchers from the University of Glasgow, in conjunction with the Hong Kong Univeristy of Science and Technology, have discovered that one injection of a protein called IL-33 can reverse Alzheimer’s-like symptoms and cognitive decline in mice.

About Michigan Institute for Neurological Disorders (MIND) is the area’s leading provider of care for the full range of injuries and disorders of the brain, spine and nervous system. Our team of doctors are experts in their field, offering compassionate, comprehensive treatment of Alzheimer’s Disease, Parkinson’s Disease, Multiple Sclerosis, Muscular Dystrophy, movement disorders, epilepsy, headaches, migraines and spinal disorders, along with all other neurological conditions, ranging from the common to rare. The largest private neurological practice in Michigan, MIND is a multi-specialty, comprehensive service center that functions as a one-stop shop for patients to be seen, get diagnosed, establish a short- and/or long-term plan and in some cases, receive treatment, all within the same day.

Brains flush toxic waste in sleep, including Alzheimer’s-linked protein, study of mice finds While we are asleep, our bodies may be resting, but our brains are busy taking out the trash. A new study has found that the cleanup system in the brain, responsible for flushing out toxic waste products that cells produce with daily use, goes into overdrive in mice that are asleep. The cells even shrink in size to make for easier cleaning of the spaces around them. Scientists say this nightly self-clean by the brain provides a compelling biological reason for the restorative power of sleep. “Sleep puts the brain in another state where we clean out all the byproducts of activity during the daytime,” said study author and University of Rochester neurosurgeon Maiken Nedergaard.

.: Welcome to The Center For Healthy Living and Longevity :. Dr. Heather Annatoyn Dickson graduated from the University of Michigan Medical School and completed her residency in Family Medicine at Providence Hospital in Southfield, Michigan. She continued working at Providence Hospital for nearly twenty years as a faculty member in their Family Medicine Residency. She split her time between serving as a primary care physician and instructing residents.