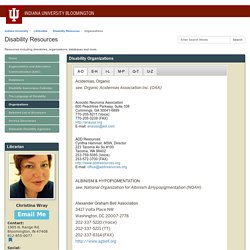 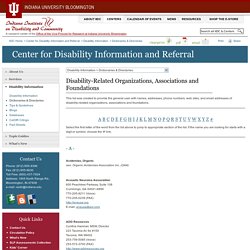 Select the first letter of the word from the list above to jump to appropriate section of the list. If the name you are looking for starts with a digit or symbol, choose the '#' link. Disability-Related Organizations, Associations and Foundations. Share all of this! ISIS begins killing spree of children with Down Syndrome - TRUNEWS with Rick Wiles TRUNEWS with Rick Wiles.

(LiveActionNews) – The Islamic State, the Middle Eastern terrorist organization commonly known as ISIS, is carrying out a fatwa targeting children with congenital disabilities such as Down Syndrome for murder. 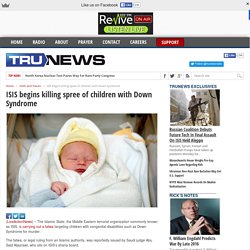 The fatwa, or legal ruling from an Islamic authority, was reportedly issued by Saudi judge Abu Said Aljazrawi, who sits on ISIS’s sharia board. According to the Iraqi news group Mosul Eye, jihadists have carried out “more than 38 confirmed cases of killing babies with congenital deformities and Down’s Syndrome, aged between one week to three months. They were killed by either lethel [sic] injection or suffocation.” The executions are known to have occurred in both Syria and Mosul, Iraq. In addition, most of the children with Down syndrome are reportedly the offspring of foreign fighters married to Iraqi, Syrian, and Asian women. “As if it is not enough for ISIL to kill men, women and the elderly, and now, they kill children,” Mosul Eye’s report lamented. 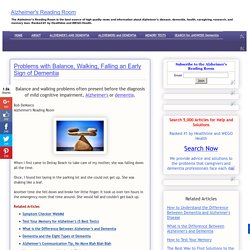 Bob DeMarco Alzheimer's Reading Room When I first came to Delray Beach to take care of my mother, she was falling down all the time. Once, I found her laying in the parking lot and she could not get up. She was shaking like a leaf. Another time she fell down and broke her little finger. Related Articles This might sound hard to believe but after I got my mother into the gym, she did not fall once for over seven years, and not until the last three weeks of her life. I took my mother into the gym for the first time when she was 88 years old. Our exercise included the treadmill, a series of stand up-sit down exercises I developed, and weight training on the kinds of machines you normally see in a gym. Glen Campbell Family Spat Common in Dementia Diagnoses: Experts.

The family feud that has divided Glen Campbell's family over his Alzheimer's disease care is unfortunately not uncommon, experts tell NBC News. 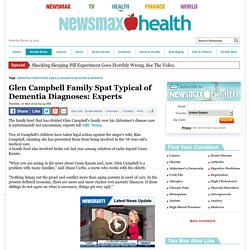 Two of Campbell’s children have taken legal action against the singer’s wife, Kim Campbell, claiming she has prevented them from being involved in the 78-year-old's medical care. A family feud also involved broke out last year among relatives of radio legend Casey Kasem. "What you are seeing in the news about Casey Kasem and, now, Glen Campbell is a problem with many families," said Diane Carbo, a nurse who works with the elderly. "Nothing brings out the greed and conflict more than aging parents in need of care. In the present deflated economy, there are more and more clashes over parents' finances. . © 2015 NewsmaxHealth. Global Training Experts - Alzheimer's Disease and Dementia Care Training. My daughter, who lost her battle with mental illness, is still the bravest person I know. 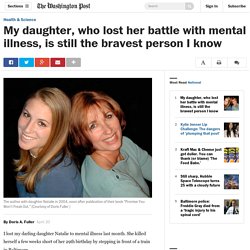 Fuller April 20 I lost my darling daughter Natalie to mental illness last month. She killed herself a few weeks short of her 29th birthday by stepping in front of a train in Baltimore. Natalie and I wrote a book together when she was 16: “Promise You Won’t Freak Out: A Teenager Tells Her Mother the Truth About Boys, Booze, Body Piercing, and Other Touchy Topics (and Mom Responds).” The idea of a teenager telling the truth about her secrets was such a startling concept that we were feature-page headliners in the Baltimore Sun and about two dozen other newspapers, went on TV coast to coast, including on one of the morning shows, and got paid to give speeches. In the book, we used a device to signal whenever a wild turn was about to take place: And then . . . . The book was published to great reviews the week before Natalie finished high school. And then . . . . At 22, during the second half of her senior year of college, Natalie experienced a psychotic break. I hope so. Hope.