NETWORKING FOR A CURE 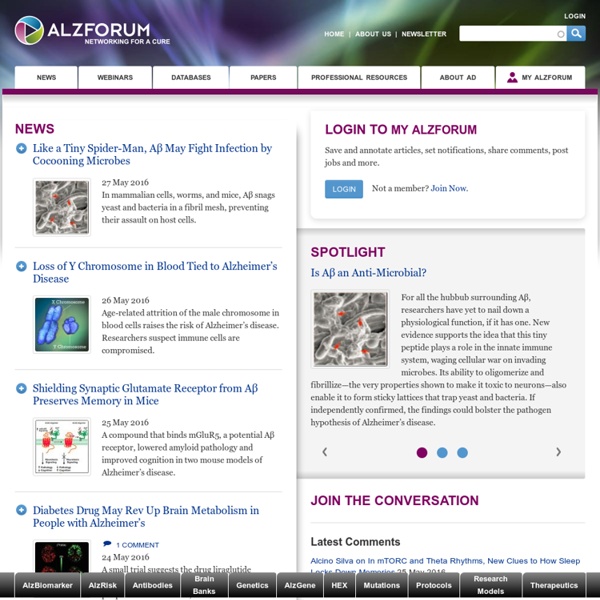 Fisher Center for Alzheimer's Research Foundation The Dementia Challenge | Fighting back against dementia Grasping the Shadow Force: Immune Cells in AMYLOID LATERAL SCLEROSIS Background Text By Amber Dance Much about the manner in which amyotrophic lateral sclerosis arises and kills motor neurons remains unclear. Scientists are pursuing a variety of possible players ranging from glia, mitochondria, and glutamate receptors to RNA metabolism, protein aggregation, and axonal transport. Yet one of the most promising—and perhaps surprising—targets to date appears to be the immune system and its complex interactions with motor neurons. So says the ALS Therapy Development Institute (ALS TDI), a nonprofit biotechnology company in Cambridge, Massachusetts. The work by the ALS TDI, and many other researchers, suggests that in ALS, some of the most important players are immune cells that can inflame and damage motor neurons. What do scientists know so far? Work in mouse models of ALS, primarily those driven by mutant superoxide dismutase 1 (SOD1), hints that immune cells can be protective.

Alzheimer y otras demencias Costa Rica | Ellos no pueden recordar, pero usted sí Brains flush toxic waste in sleep, including Alzheimer’s-linked protein, study of mice finds While we are asleep, our bodies may be resting, but our brains are busy taking out the trash. A new study has found that the cleanup system in the brain, responsible for flushing out toxic waste products that cells produce with daily use, goes into overdrive in mice that are asleep. The cells even shrink in size to make for easier cleaning of the spaces around them. Scientists say this nightly self-clean by the brain provides a compelling biological reason for the restorative power of sleep. “Sleep puts the brain in another state where we clean out all the byproducts of activity during the daytime,” said study author and University of Rochester neurosurgeon Maiken Nedergaard. Staying up all night could prevent the brain from getting rid of these toxins as efficiently, and explain why sleep deprivation has such strong and immediate consequences. One line of thinking was that sleep helps animals to conserve energy by forcing a period of rest. Health/Science alerts