Dementia & Alzheimer’s — Treatment with Reiki and Crystals. Article by Reiki Master Judy Camblor Dementia is a general term used to describe a person’s decline in mental ability, which after time and advanced age, can become severe enough to interfere with daily life. 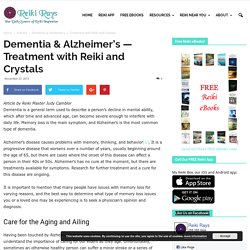 Memory loss is the main symptom, and Alzheimer’s is the most common type of dementia. Alzheimer’s disease causes problems with memory, thinking, and behavior. It is a progressive disease that worsens over a number of years, usually beginning around the age of 65, but there are cases where the onset of this disease can affect a person in their 40s or 50s. Alzheimer’s has no cure at the moment, but there are treatments available for symptoms. It is important to mention that many people have issues with memory loss for varying reasons, and the best way to determine what type of memory loss issues you or a loved one may be experiencing is to seek a physician’s opinion and diagnosis. Care for the Aging and Ailing Care for the Caregivers Crystals Judy Camblor Related October 8, 2012. Reiki’s Use in Dementia Patients and For Their Caregivers. Memory problems. 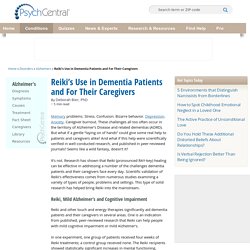 Stress. Confusion. Bizarre behavior. Depression. Anxiety. It’s not. Reiki, Mild Alzheimer’s and Cognitive Impairment Reiki and other touch and energy therapies significantly aid dementia patients and their caregivers in several areas. In one experiment, one group of patients received four weeks of Reiki treatments; a control group received none.

Reiki May Reduce Stress, Depression and Anxiety “Stress” most often is mentioned by those seeking Reiki treatments (Potter). Research shows that Reiki also can help reduce depression and anxiety among people with chronic illnesses (Dressin and Singg, 1998). Chronic or periodic pain-inducing illnesses can co-occur in dementia patients. Reiki treatment often results in a state of calm relaxation (Richeson, Spross, Lutz and Peng, 2010; others). Can Mushrooms Treat Dementia and Alzheimer's? Mushrooms may soon be weapons in the fight against dementia and Alzheimer's disease. 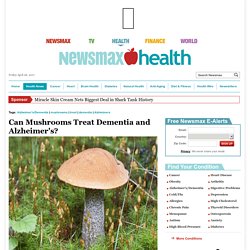 Many of them contain bioactive compounds that may increase nerve growth in the brain and protect against inflammation and other neurotoxins. A study published in the Journal of Medicinal Food explained that previous research has examined the benefits of mushrooms in fighting cancer and cardiometabolic disease, such as diabetes.

Researchers found evidence indicating a potential role of mushrooms as functional foods — a food that has a positive effect on health beyond its basic nutrition — to reduce or delay development of age-related neurodegeneration. "Very few studies have focused on food that may benefit neurodegenerative diseases," says Journal of Medicinal Food Editor-in-Chief Sampath Parthasarathy, Ph.D. "The current study might stimulate the identification of more food materials that are neuroprotective. " © 2017 NewsmaxHealth. Hydergine Effects, Benefits, Dosages and Side Effects. Hydergine is also known as Ergoloid Mesylates, co-dergocrine mesilate, or dihydroergotoxine mesylate. 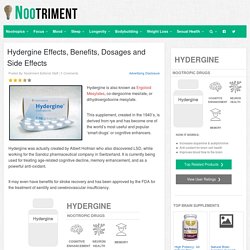 This supplement, created in the 1940’s, is derived from rye and has become one of the world’s most useful and popular ‘smart drugs’ or cognitive enhancers. Hydergine was actually created by Albert Hofman who also discovered LSD, while working for the Sandoz pharmaceutical company in Switzerland. It is currently being used for treating age-related cognitive decline, memory enhancement, and as a powerful anti-oxidant. It may even have benefits for stroke recovery and has been approved by the FDA for the treatment of senility and cerebrovascular insufficiency. Hydergine Nootropic Drugs Cognitive Enhancement Neuron Health. Regularly eating mushrooms 'can PREVENT Alzheimer's' - but it's more than your average button or portobello. EATING plenty of mushrooms could help stave off dementia, according to new research. 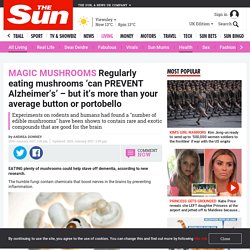 The humble fungi contain chemicals that boost nerves in the brains by preventing inflammation. SWNS:South West News Service A study of eleven types of mushrooms – some already used for medicinal purposes – found they increased the brain’s grey matter by raising the production of a chemical called nerve growth factor (NGH) The findings, published in the Journal of Medicinal Food, suggest mushrooms are a potential ‘superfood’ which could reduce or delay development of dementia. Researchers reviewed the scientific evidence with regard to their anti-Alzheimer’s effects and found “they may fulfil a preventive function against the development of Alzheimer’s disease”. 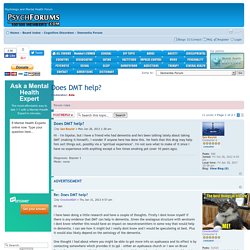 I look forward to hearing from you after you've checked with your friends. I've looked into Ayahuasca quite a bit, and from what I can tell, this oral ingestion is different from inhaling the DMT vapor in the form of 1-3 hits (via bong, pipe, or other devices). One is that the oral ingestion is not as intense, or does not produce the "break through" as it is called. Another is that effects last much longer. Vapor form is about 15-30 mins compared to approx. 4 hrs for Ayahuasca.

I read a cool peer reviewed journal article on DMT by Cott and Rock, "Phenomenology of N,N-Dimethyltryptainine Use: A Thematic Analysis" (2008), in which the phenomenology is qualitatively characterized. Living with Early-Onset Dementia. Dementia Care Dos and Don'ts: Dealing with Dementia.