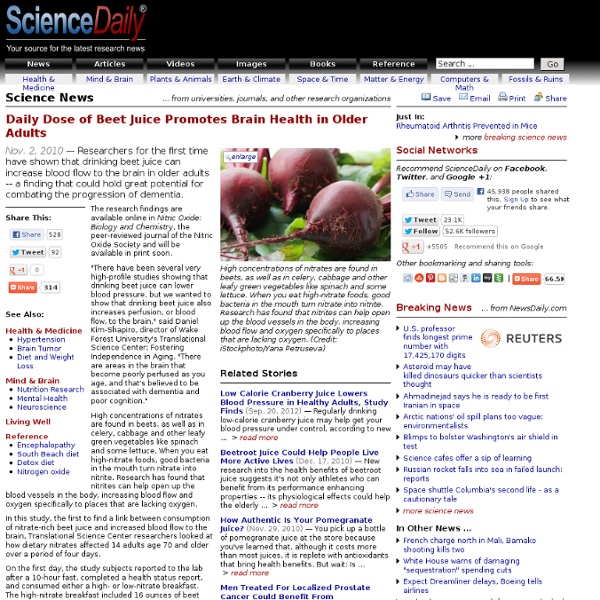 Researchers for the first time have shown that drinking beet juice can increase blood flow to the brain in older adults -- a finding that could hold great potential for combating the progression of dementia. The research findings are available online in Nitric Oxide: Biology and Chemistry, the peer-reviewed journal of the Nitric Oxide Society and will be available in print soon. "There have been several very high-profile studies showing that drinking beet juice can lower blood pressure, but we wanted to show that drinking beet juice also increases perfusion, or blood flow, to the brain," said Daniel Kim-Shapiro, director of Wake Forest University's Translational Science Center; Fostering Independence in Aging. "There are areas in the brain that become poorly perfused as you age, and that's believed to be associated with dementia and poor cognition." The next day, following another 10-hour fast, the subjects returned to the lab, where they ate their assigned breakfasts. Related:  Healthy Eating

Walnuts Help Both Your Heart & Mood Ever notice that a walnut looks just like the human brain? According to ancient wisdom, this is more than just a coincidence. Considering one of the biggest benefits of walnuts nutrition is the ability to support your most important organ — the brain — walnuts have now been scientifically proven to be a true “brain food” and a leader among all nuts. Walnuts can help improve your mood considering they contain one of the highest amounts of omega-3 fats of any nut. In addition to the remarkable things that omega-3 foods can do for your mind, they’re also known to support heart health and fight heart disease by lowering triglyceride levels and reducing dangerous plaque formation in the arteries. And walnuts can be a great tool for weight management too. Walnuts Nutrition Facts Would you believe walnuts have been providing crucial nutrients to humans for up to 8,000 years? One ounce of walnuts, or about 14 halves, has about: Omega-3 Fatty Acids: A Star of Walnut Nutrition 1. 2. 3. 4. 5. 6. 7.

Chemical found in red wine and dark chocolate rejuvenates cells, study finds A compound in dark chocolate and red wine could help rejuvenate cells, according to a scientific breakthrough. Researchers from the Universities of Exeter and Brighton have made the sizeable breakthrough on ageing and discovered a way to rejuvenate inactive senescent cells. They found that they could make the cells both look and behave like younger cells. The researchers applied compounds called reversatrol analogues, which are chemicals based on a substance naturally found in red wine, dark chocolate, red grapes and blueberries, to cells in culture. Previous research by the University of Exeter had found that a class of genes called splicing factors are progressively switched off as we age. But the new study found that applying the reversatrol analogues to the cells caused splicing factors to be switched back on. Within hours of treatment, older cells had started to divide and had longer telomeres, which are the ‘caps’ on the chromosomes which shorten as we age. Reuse content

Top 25 Natural Appetite Suppressants: Almonds - Healthy Weight Loss: Top 25 Natural Appetite Suppressants You can use your keyboard to see the next slide ( ← previous, → next) While drinking more than one to two cups of Joe a day can leave you feeling jittery and nervous, a moderate amount of coffee can help boost metabolism and suppress your appetite. Coffee's secret? Caffeine, along with antioxidants from the coffee beans. Just don't cancel out those good effects with too much sugar or cream! For centuries, many cultures have used ginger root for its amazing digestive powers. Get spicy! Apples of all varieties and types help suppress hunger for a number of reasons. Studies have shown that eating an egg or two for breakfast can help dieters feel more full over 24 hours than if they eat a bagel with the same amount of calories. Could taming your appetite be as easy as drinking an extra glass or two of water? According to food scientists, potatoes contain a special type of starch that resists digestive enzymes, making them stay in your stomach longer and therefore keep you full. Image By

120 Ways to Boost Your Brain Power Here are 120 things you can do starting today to help you think faster, improve memory, comprehend information better and unleash your brain’s full potential. Solve puzzles and brainteasers.Cultivate ambidexterity. Use your non-dominant hand to brush your teeth, comb your hair or use the mouse. Write with both hands simultaneously. Switch hands for knife and fork.Embrace ambiguity. Readers’ Contributions Dance! Contribute your own tip! There are many, many ways to keep our brains sharp. This Irish version of Nutella hits the same spot– without the controversial palm oil According to the European Food Safety Authority, the oil is more carcinogenic than any other but still remains a major, and low cost, ingredient in many popular spreads and sweets on the market in Ireland, including Nutella. Irish entrepreneur Dave McGeady spotted an opportunity to bring a healthier version of the hazelnut spread to Irish kitchens minus the palm oil and refined sugar, which makes up more than 50pc of each Nutella jar. "I’ve always loved hazelnut and cocoa spreads, and used to eat loads of the stuff until I took a look at the back of the jars and saw how much sugar, palm oil and other junk is in so many of these products," he said. The Wyldsson product still contains 82kcal per 15g serving so while it is still suggested to be enjoyed in moderation, the hazelnut and cocoa spread contains much less refined sugar than its supermarket alternatives, and is sweetened using dates. A 360g jar of the spread can be purchased at McGeady’s online store on wyldsson.com for €7.99.

9 Foods That Will Fill You Up Without Filling You Out - Men's Health Magazine Australia | Fitness, Health, Weight Loss, Nutrition, Sex & Style When hunger strikes, you want to fuel up fast—and efficiently. That means choosing foods that will fill you up so you’re not hitting up the fridge an hour later. So try these 9 foods to quiet your growling belly—and keep it satisfied until your next meal time rolls along. One large egg packs over 6 grams of protein. Boil ‘em for snacks: It’s hard to eat more than two, so they crack cravings. Low-calorie broth-based soups weigh down your stomach, fooling your body into thinking you’re full. A medium stalk of antioxidant-packed asparagus has just 12 kilojoules. Knock out hunger with a combination punch of fibre and protein. Research suggests that a breakfast with beef and eggs may help you feel fuller all day and lead to less evening snacking than a breakfast with equal calories but less protein. Boost the volume of this classic by cooking it with an extra cup or half cup of water. One cup contains 680 kilojoules and 28 grams of slow-digesting protein.