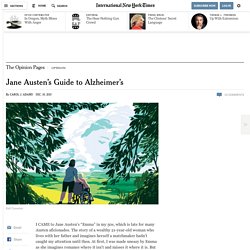 The story of a wealthy 21-year-old woman who lives with her father and imagines herself a matchmaker hadn’t caught my attention until then. At first, I was made uneasy by Emma as she imagines romance where it isn’t and misses it where it is. But during a caregiving crisis in my life, I lost count of how many times I read or listened to Austen’s novel. I turned her words over in my mind like a piece of slowly melting hard candy.

Early on in tending to my mother, who had Alzheimer’s, I was sustained by other Austen novels, but during the middle stages of her disease it was all “Emma,” all the time. It seemed that I was always one step behind her illness, so I stockpiled books on caregiving, including Kenneth P. The novel asserts that Emma had little to distress or vex her, yet describes many distressing and vexing events. Dr. Memory loss + anxiety = search for reassurance. “The upper shutters?” “No.” Connecting people with Dementia with Nature and Exercise. Improving the lives of dementia carers. A psychological intervention that provides stress relief and emotional support for people caring for relatives with dementia can reduce depression and anxiety and improve wellbeing at no extra cost to standard care, finds new UCL research published in Lancet Psychiatry. 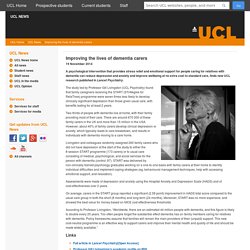 The study led by Professor Gill Livingston (UCL Psychiatry) found that family caregivers receiving the START (STrAtegies for RelaTives) programme were seven times less likely to develop clinically significant depression than those given usual care, with benefits lasting for at least 2 years. Two-thirds of people with dementia live at home, with their family providing most of their care. There are around 670 000 of these family carers in the UK and more than 15 million in the USA. However, about 40% of family carers develop clinical depression or anxiety, which typically leads to care breakdown, and results in individuals with dementia moving to a care home.

Links Images. Dementia Engagement & Empowerment Project. A Guide to Psychosocial Interventions in Early Stages of Dementia. Designing for dementia. You are stuck in a busy, noisy, unfamiliar building. 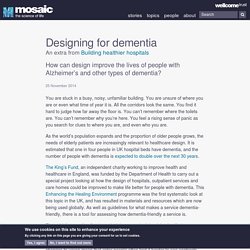 You are unsure of where you are or even what time of year it is. All the corridors look the same. You find it hard to judge how far away the floor is. You can’t remember where the toilets are. You can’t remember why you’re here. As the world’s population expands and the proportion of older people grows, the needs of elderly patients are increasingly relevant to healthcare design. The King’s Fund, an independent charity working to improve health and healthcare in England, was funded by the Department of Health to carry out a special project looking at how the design of hospitals, outpatient services and care homes could be improved to make life better for people with dementia. 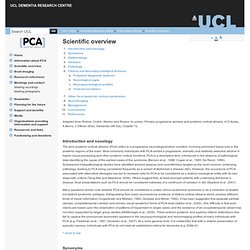 Primary progressive aphasia and posterior cortical atrophy. In D Ames, A Burns, J O'Brien (Eds), Dementia (4th Ed), Chapter 72. Introduction and nosology The term posterior cortical atrophy (PCA) refers to a progressive neurodegenerative condition involving prominent tissue loss in the posterior regions of the brain. Most commonly individuals with PCA exhibit a progressive, dramatic and relatively selective decline in higher visual processing and other posterior cortical functions. Many questions remain over whether PCA should be considered a unitary clinico-anatomical syndrome or as a collection of related but distinct syndromic subtypes. . ^ back to top Synonyms.

I'll Be Me - The Movie. The Unspoken Impact of Dementia (every Australian should see this) Communication Strategies for Primary Progressive Aphasia & FTD’s. Semantic Dementia. Progressive NonFluent Aphasia.