Blueberries may help prevent Alzheimer's, new research suggests. Researchers from the University of Cincinnati in the US gave them either freeze-dried blueberry powder, which is equivalent to a cup of berries, or a placebo powder once a day for 16 weeks. 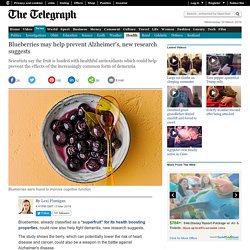 Lead researcher Dr Robert Krikorian said: "There was improvement in cognitive performance and brain function in those who had the blueberry powder compared with those who took the placebo. "The blueberry group demonstrated improved memory and improved access to words and concepts. " The researchers also conducted MRI scans which showed increased brain activity in those who ingested the blueberry powder. Dr Krikorian said that blueberries' beneficial effects could be due to flavonoids called anthocyanins, which have been shown to improve animals' cognition. A second study included 94 people aged 62 to 80 who did not have measurable cognitive decline but reported experiencing memory loss.

"The results were not as robust as with the first study," said Dr Krikorian. Link between vitamin D, dementia risk confirmed. Vitamin D deficiency is associated with a substantially increased risk of dementia and Alzheimer's disease in older people, according to the most robust study of its kind ever conducted. 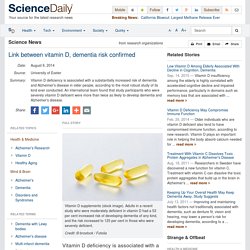 An international team, led by Dr David Llewellyn at the University of Exeter Medical School, found that study participants who were severely Vitamin D deficient were more than twice as likely to develop dementia and Alzheimer's disease. The team studied elderly Americans who took part in the Cardiovascular Health Study. Low vitamin D among elderly associated with decline in cognition, dementia. Vitamin D insufficiency among the elderly is highly correlated with accelerated cognitive decline and impaired performance, particularly in domains such as memory loss that are associated with Alzheimer's disease and dementia, researchers with the UC Davis Alzheimer's Disease Center and Rutgers University have found. 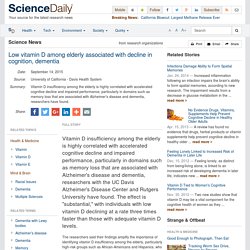 Astaxanthin Provides Broad Spectrum Protection. Researchers in Japan have long looked to the sea for sources of new medications. 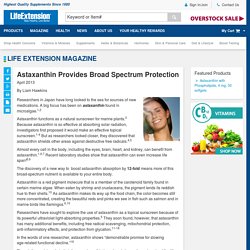 A big focus has been on astaxanthin found in microalgae.1,2 Astaxanthin functions as a natural sunscreen for marine plants.3 Because astaxanthin is so effective at absorbing solar radiation, investigators first proposed it would make an effective topical sunscreen.1-4 But as researchers looked closer, they discovered that astaxanthin shields other areas against destructive free radicals.4,5 Almost every cell in the body, including the eyes, brain, heart, and kidney, can benefit from astaxanthin.1,6,7 Recent laboratory studies show that astaxanthin can even increase life span!

8,9 The discovery of a new way to boost astaxanthin absorption by 12-fold means more of this broad-spectrum nutrient is available to your entire body. Astaxanthin is a red pigment molecule that is a member of the carotenoid family found in certain marine algae. Astaxanthin: Potent Skin Protection from the Inside Out Boosting Immune Function. 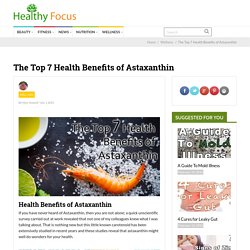 Alzheimer's and Dementia Prevention: How To Reduce Your Risk and Protect Your Brain as You Age. Trump Reveals Secret Behind His $4 Billion Empire. In a recent speech he gave at a science convention in New York City, Denzel Washington left the audience speechless. 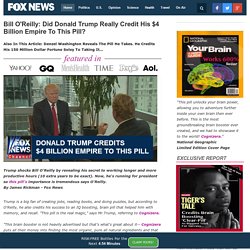 He said, "I would not be able to have the energy I have, the focus and ability to memorize my movie lines after just reading them once - if it wasn't for Cognizera " To corroborate his story, Denzel brought on to the stage, MIT scientist Peter Molnar. Peter went right after adderall, saying "We tested Cognizera " Vs. 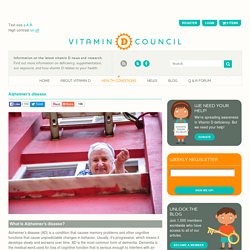 Alzheimer’s disease (AD) is a condition that causes memory problems and other cognitive functions that cause unpredictable changes in behavior. Usually, it’s progressive, which means it develops slowly and worsens over time. AD is the most common form of dementia. Dementia is the medical word used for loss of cognitive function that is serious enough to interfere with an individual’s daily life. Currently, there is no cure for AD. There are two main changes that take place in the brain when an individual develops AD: Plaques, which are clusters of protein that build up between the nerve cells in the brain. VITAMINS AND SUPPLEMENTS.

Recent research has shown a strong link between certain nutrient deficiencies and an increased risk of development and faster progression of Alzheimer's and other dementias. 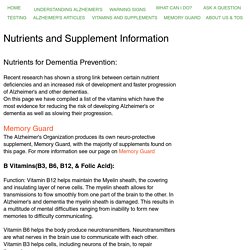 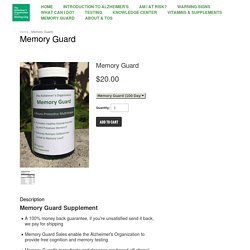 Its ingredients are identical in quality and portion to those used in the studies demonstrating cognitive affects. The dosages of Memory Guard are identical to the dosage administered in the medical studies . Alz-org. Cognizera : Ultimate Cognitive Enhancement Formula ! Cognizera :- There is no denying the way that a capable and solid mind is the base of a laser center and sharp memory. 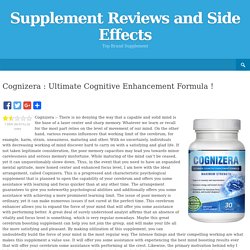 Whatever we learn or recall for the most part relies on the level of movement of our mind. On the other hand, various reasons influences that working limit of the cerebrum, for example, harm, strain, uneasiness, maturing and other. Vitamin D: Can it prevent Alzheimer's & dementia? Can taking vitamin D supplements or spending more time in the sun help prevent Alzheimer's and other forms of dementia? Answers from David S. Knopman, M.D. FAB: 19 April 2015 - Express - Supplements can halt Alzheimer’s in groundbreaking dementia prevention treatment. LUCY JONHSTON The groundbreaking two-year study discovered a combination of B vitamins and omega-3 found in oily fish prevented brain shrinkage, a hallmark of the devastating condition that develops in 550 people a day in the UK. FAB Research spoke to Dr Jernerén about the VITACOG trial and the recent publication: Jernerén et al., 2015 - Brain atrophy in cognitively impaired elderly: the importance of long-chain ω-3 fatty acids and B vitamin status in a randomized controlled trial.

Alzheimer's Research Center. Skip Navigation Vitamin D deficiency increases the risk for Alzheimer’s Disease Vitamin D deficiency markedly increases the risk of dementia and Alzheimer’s disease. Choosing a B12 Supplement. EmailEmail. MIND Diet for Preventing Cognitive Decline and Alzheimer's Disease. It sounds almost too good to be true, but two recent studies have suggested that a pretty commonsense diet, appropriately called MIND , can help prevent or delay age-related cognitive decline and reduce the risk of developing Alzheimer’s disease. Done by the same researchers at Rush University Medical Center in Chicago, both studies appeared in the journal Alzheimer’s & Dementia and were funded by the National Institute on Aging.

MIND stands for Mediterranean-DASH Diet Intervention for Neurodegenerative Delay. As that awkward name indicates, the diet is a hybrid of the Mediterranean and DASH (Dietary Approaches to Stop Hypertension) diets. Both diets have been shown to reduce the risk of cardiovascular disease and have also been linked to protective effects against age-related cognitive decline.

The researchers said they picked elements from the diets “based on the most compelling findings in the diet-dementia field.” The Journal of Prevention of Alzheimer's Disease. T.J. 7 Alzheimer’s Dementia Prevention Strategies – Expert Physicians Panel Weighs In - Natural Health Advisory. Kathleen Jade, N.D. • 11/30/2015 • Affiliate Disclosure The Physicians Committee for Responsible Medicine (PCRM), an organization that advocates preventive medicine, recommends 7 simple changes to diet and lifestyle to lower the risk of Alzheimer’s disease. According to PCRM: “Evidence suggests that specific diet and exercise habits can reduce the risk by half or more.” The importance of diet The first half of the dementia prevention guidelines relate to diet. Dietary guidelines for Alzheimer’s dementia prevention. B Vitamins for Memory: Niacin Benefits for Alzheimer’s Disease - Natural Health Advisory. Fish and long-chain omega-3 fatty acids, DHA & EPA.