Science News. Improving brain's garbage disposal may slow Alzheimer's and other neurodegenerative diseases. NEW YORK NY (December 21, 2015)-- A drug that boosts activity in the brain's "garbage disposal" system can decrease levels of toxic proteins associated with Alzheimer's disease and other neurodegenerative disorders and improve cognition in mice, a new study by neuroscientists at Columbia University Medical Center (CUMC) has found. 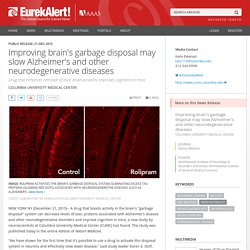 The study was published today in the online edition of Nature Medicine. "We have shown for the first time that it's possible to use a drug to activate this disposal system in neurons and effectively slow down disease," said study leader Karen E. Duff, PhD, professor of pathology and cell biology (in psychiatry and in the Taub Institute for Research on Alzheimer's Disease and the Aging Brain) at CUMC and at the New York State Psychiatric Institute. "This has the potential to open up new avenues of treatment for Alzheimer's and many other neurodegenerative diseases. " Administering rolipram activated the proteasome and restored protein disposal to normal levels. Speeding up brain's waste disposal may slow down neurodegenerative diseases. A study of mice shows how proteasomes, a cell's waste disposal system, may break down during Alzheimer's disease (AD), creating a cycle in which increased levels of damaged proteins become toxic, clog proteasomes, and kill neurons. 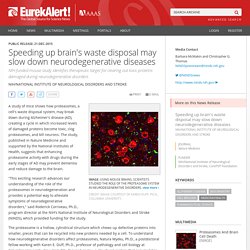 The study, published in Nature Medicine and supported by the National Institutes of Health, suggests that enhancing proteasome activity with drugs during the early stages of AD may prevent dementia and reduce damage to the brain. "This exciting research advances our understanding of the role of the proteasomes in neurodegeneration and provides a potential way to alleviate symptoms of neurodegenerative disorders," said Roderick Corriveau, Ph.D., program director at the NIH's National Institute of Neurological Disorders and Stroke (NINDS), which provided funding for the study. The proteasome is a hollow, cylindrical structure which chews up defective proteins into smaller, pieces that can be recycled into new proteins needed by a cell. Drs. References: Science News. Magnesium ions show promise in slowing progression of Alzheimer's disease in mice.

New research published in the December 2015 issue of The FASEB Journal, shows that in mouse models of the disease oral administration of magnesium-L-threonate (MgT) alleviated cognitive decline by suppressing the Aβ deposition in amyloid plaques in an APH-1α/1β-dependent manner. 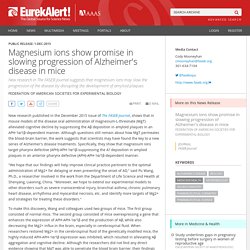 Although questions still remain about how MgT permeates the blood-brain barrier, the work suggests that scientists may have found the key to a new series of Alzheimer's disease treatments. Specifically, they show that magnesium ions target pharynx defective (APH)-APH-1α/1β-suppressing the A? Deposition in amyloid plaques in an anterior pharynx defective (APH)-APH-1α/1β-dependent manner. "We hope that our findings will help improve clinical practice pertinent to the optimal administration of Mg2+ for delaying or even preventing the onset of AD," said Pu Wang, Ph.D., a researcher involved in the work from the Department of Life Science and Health at Shenyang, Liaoning, China. 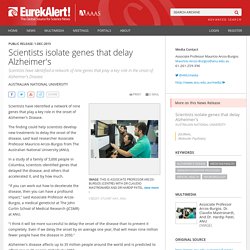 The finding could help scientists develop new treatments to delay the onset of the disease, said lead researcher Associate Professor Mauricio Arcos-Burgos from The Australian National University (ANU). In a study of a family of 5,000 people in Columbia, scientists identified genes that delayed the disease, and others that accelerated it, and by how much. "If you can work out how to decelerate the disease, then you can have a profound impact," said Associate Professor Arcos-Burgos, a medical geneticist at The John Curtin School of Medical Research (JCSMR) at ANU. "I think it will be more successful to delay the onset of the disease than to prevent it completely. Even if we delay the onset by on average one year, that will mean nine million fewer people have the disease in 2050. " Antidepressant medication protects against compounds linked to dementia.

MAYWOOD, Ill. - In addition to treating depression, a commonly used antidepressant medication also protects against compounds that can cause memory loss and dementia, a Loyola University Medical Center study has found. 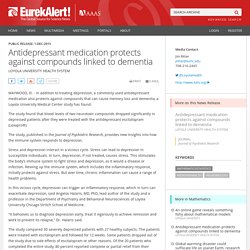 The study found that blood levels of two neurotoxic compounds dropped significantly in depressed patients after they were treated with the antidepressant escitalopram (Lexapro®). The study, published in the Journal of Psychiatric Research, provides new insights into how the immune system responds to depression. Stress and depression interact in a vicious cycle. Stress can lead to depression in susceptible individuals. In turn, depression, if not treated, causes stress. Science News. Synapse discovery could lead to new treatments for Alzheimer's disease. A team of researchers led by UNSW Australia scientists has discovered how connections between brain cells are destroyed in the early stages of Alzheimer's disease - work that opens up a new avenue for research on possible treatments for the degenerative brain condition. 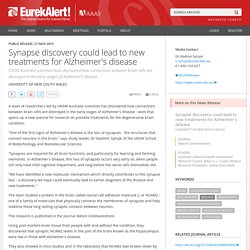 "One of the first signs of Alzheimer's disease is the loss of synapses - the structures that connect neurons in the brain," says study leader, Dr Vladimir Sytnyk, of the UNSW School of Biotechnology and Biomolecular Sciences. "Synapses are required for all brain functions, and particularly for learning and forming memories. In Alzheimer's disease, this loss of synapses occurs very early on, when people still only have mild cognitive impairment, and long before the nerve cells themselves die. "We have identified a new molecular mechanism which directly contributes to this synapse loss - a discovery we hope could eventually lead to earlier diagnosis of the disease and new treatments. " Disclaimer: AAAS and EurekAlert! Neuroscientists gain insight into cause of Alzheimer's symptoms.

Virginia Tech Carilion Research Institute scientists have uncovered a mechanism in the brain that could account for some of the neural degeneration and memory loss in people with Alzheimer's disease. 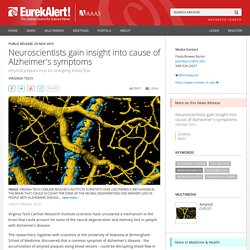 The researchers, together with scientists at the University of Alabama at Birmingham School of Medicine, discovered that a common symptom of Alzheimer's disease - the accumulation of amyloid plaques along blood vessels - could be disrupting blood flow in the brain. The results were published Monday in the journal Brain. "We've always been interested in how glial cells interact with blood vessels," said Harald Sontheimer, director of the Center for Glial Biology in Health, Disease, and Cancer at the Virginia Tech Carilion Research Institute and senior author of the paper. "Astrocytes are the most populous cell type in the brain and even outnumber neurons. " Trinity researchers report major breakthrough in understanding Alzheimer's disease. Scientists at Trinity College Dublin have shed light on a fundamental mechanism underlying the development of Alzheimer's disease, which could lead to new forms of therapy for those living with the condition. 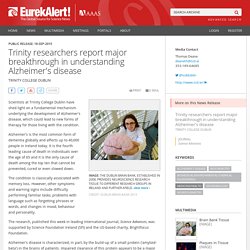 Alzheimer's is the most common form of dementia globally and affects up to 40,000 people in Ireland today. It is the fourth leading cause of death in individuals over the age of 65 and it is the only cause of death among the top ten that cannot be prevented, cured or even slowed down. The condition is classically associated with memory loss. However, other symptoms and warning signs include difficulty performing familiar tasks, problems with language such as forgetting phrases or words, and changes in mood, behaviour and personality. World Alzheimer's Day: Breakthrough in how to treat disease by removing amyloid-beta from brain discovered. Ahead of World Alzheimer's Day, scientists have announced a breakthrough in removing amyloid-beta from the brain. 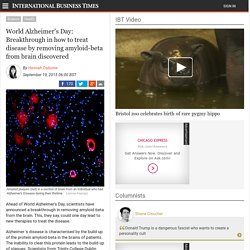 This, they say, could one day lead to new therapies to treat the disease. Alzheimer 's disease is characterised by the build-up of the protein amyloid-beta in the brains of patients. The inability to clear this protein leads to the build-up of plaques. Down syndrome research untangles therapeutic possibilities for Alzheimer's. More than five million Americans are living with Alzheimer's disease (AD). 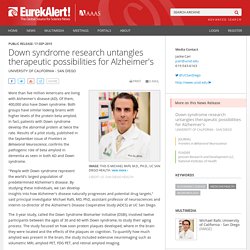 Of them, 400,000 also have Down syndrome. Both groups have similar looking brains with higher levels of the protein beta amyloid. Poor sleep linked to toxic buildup of Alzheimer's protein, memory loss. Sleep may be a missing piece in the Alzheimer’s disease puzzle. Scientists at the University of California, Berkeley, have found compelling evidence that poor sleep – particularly a deficit of the deep, restorative slumber needed to hit the save button on memories – is a channel through which the beta-amyloid protein believed to trigger Alzheimer’s disease attacks the brain’s long-term memory.

“Our findings reveal a new pathway through which Alzheimer’s disease may cause memory decline later in life,” said UC Berkeley neuroscience professor Matthew Walker, senior author of the study to be published Monday, June , in the journal Nature Neuroscience. Excessive deposits of beta-amyloid are key suspects in the pathology of Alzheimer’s disease, a virulent form of dementia caused by the gradual death of brain cells. “This discovery offers hope,” he said. “Sleep could be a novel therapeutic target for fighting back against memory impairment in older adults and even those with dementia.”

New technique permits cell-specific examination of proteins in Alzheimer's brain tissue. Using 10-year-old archival brain tissue from patients with Alzheimer's disease, a research team from NYU Langone Medical Center has developed a novel method to examine the structure and function of proteins at the cell level--providing greater means to study protein changes found in Alzheimer's disease. Specifically, the researchers were able to extract more than 400 proteins from neurons that came from the brain's temporal cortex, far more than have been extracted previously. The study is to be published online October 21 in the journal Scientific Reports (Nature).

"This new technique allows for more precise examination of formalin-preserved tissue from hundreds of brain banks around the world, and holds particular value in studying the pathogenesis of Alzheimer's disease and other neurodegenertative diseases," particularly for examining, says the study's senior investigator, Thomas Wisniewski, MD, director of the NYU Langone Center for Cognitive Neurology, and the Lulu P. and David J. Study: Brain's immune system could be harnessed to fight Alzheimer's.

Alzheimer's may be a collection of diseases that should be treated separately.