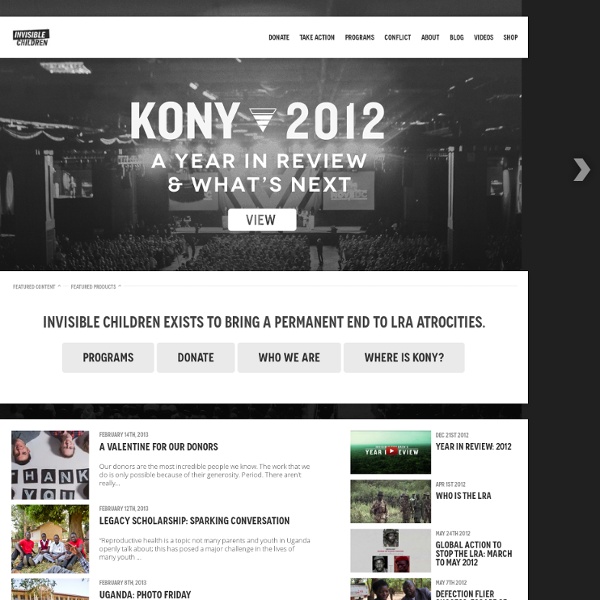 Training Courses Friday 15 March 2013, 7:00 PM Followed by a Q&A with Barbara Miller and Iranian blogger Farnaz Seifi On the Internet, their voices are skillfully shielded, but the famous bloggers Yoani Sánchez, Zeng Jinyan and Farnaz Seifi aren’t afraid of the dictatorial regimes in their respective home countries of Cuba, China and Iran.

Caught on film and stored on database: how police keep tabs on activists | UK news Shocking footage shot by police, accompanied by their own critical commentary, shows how their officers monitored campaigners and the media – and demanded personal information – at last August's climate camp demonstration in Kent Link to video: Under surveillance: police target environmental protesters and journalists At 11:37am on August 8 last year, two police surveillance officers sat in a patrol car in Kent and switched on their Sony digital video camera. When the tape started to roll, they stated they were "evidence gatherer" surveillance officers and explained the purpose of the operation. A lead surveillance officer and his assistant, they were on duty to help police the Climate Camp demonstration, an environmental protest against the nearby Kingsnorth coal-fired power station. What the pair did not know when, 20 minutes later, they stood on a grass verge at the entrance to the camp and started work, was that their surveillance footage would be obtained by the Guardian.

Doth I protest too much? | Mark Thomas I was sent the now notorious "police spotter card" through the post. It's an official laminated card for "police eyes only" and labelled as coming from "CO11 Public Order Intelligence Unit". The card contained the photographs of 24 anti-arms trade protesters, unnamed but lettered A to X. My picture appeared as photo H. You can imagine my reaction at finding I was the subject of a secret police surveillance process … I was delighted. The Metropolitan police circulated the card specifically for the Docklands biannual arms fair in London to help its officers identify "people at specific events who may instigate offences or disorder". What exactly was I doing that was so awfully wrong as to merit this attention? Many of those targeted by the police have committed no crime and are guilty only of non-violent direct action. The very phrase "domestic extremist" defines protesters in the eyes of the police as the problem, the enemy. Protest is part of the democratic process.

Kampanye Bangkit: Kampanye Bangkit Beraksi - Bangkit Melawan Pemiskinan I&#039;m a Photographer, not a Terrorist Africa | Tackling South Africa&#039;s rape epidemic Two friends of footballer Zakhe were raped and murdered for being gay The trial of three of the men accused of the rape and murder of one of South Africa's leading sportswomen, the openly gay football star Eudy Simelane, starts in South Africa on Wednesday. Thirty-one lesbian women have been reported raped and murdered in homophobic attacks in South Africa since 1998. But according to Triangle - a gay rights organisation - only two cases of "corrective rape" have ever made it to the courts; there has been only one conviction. "This is a sad fact in this country generally, women are very reluctant to come forward," says Sharon Cox from Triangle. "Corrective rape" is the term used to describe the rape of a lesbian woman by a man to either punish her, or "correct" her behaviour. Ms Cox says rape is power is South Africa. "The thinking is, all it takes is one good man to cure you of being a lesbian," she told the BBC's Newshour programme. Gang rape Sense of entitlement

Persepolis 2.0: Iran&#039;s Post-Election Uprising: Hopes &amp; Fears Revealed Ex-Workers&#039; Collective : Home I am Dr. Tiller Action For Australia - www.getup.org.au The 3/50 Project ::: Home 826LA Why Love Is Our Most Powerful, Lasting Form of Activism | Sex and Relationships February 13, 2007 | Like this article? Join our email list: Stay up to date with the latest headlines via email. People who want to see the world bettered -- made more just and honest and kind -- often set their gaze on the farthest horizon. I am as guilty as the next bleeding heart of focusing the majority of my energies on problems I see as compelling in large part because of their strangeness to me. We are so often wide awake about the decisions our elected officials make in the political, public realm and so asleep about our private choices. Who you love and how you love them is as much a statement about your social conscience -- perhaps even a far more accurate and moving statement -- as the letters you write to Congress or the votes you cast. Some of the ways in which love can be radical are quite obvious and tied to institutions. And, of course, beyond the obvious is the most critical -- what kind of relationship do you want to be in? If you think that love is finite, think again.

World Is Witness NEW ON THE CPG Blog View All Posts Journey to Rwanda April 6, 2014 Mike Abramowitz, director of the Center for the Prevention of Genocide, reports from his trip to Kigali, where a Museum delegation is participating in the 20th anniversary commemorations of the genocide in Rwanda. A Countryside of Concentration Camps New Republic correspondent Graeme Wood provides a vivid account of the plight of the Rohingya, which he covered during his recent trip to Burma undertaken with support from the Center for the Prevention of Genocide. Central African Republic: The Path to Mass Atrocities Learn about the background to the current violence in the Central African Republic. Museum Launches Initiative to Examine International Responses to Genocide January 9, 2014 Why the Central African Republic (CAR) Crisis Is a Security Problem for the US In an article for Defense One, Madeleine K. Museum statement on Violence in South Sudan December 20, 2013 December 9, 2013 Featured Items from the CPG Blog