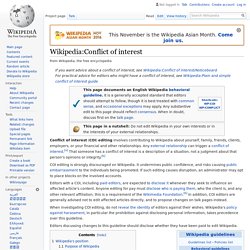 Any external relationship can trigger a conflict of interest. [a] That someone has a conflict of interest is a description of a situation, not a judgment about that person's opinions or integrity. [b] COI editing is strongly discouraged on Wikipedia. It undermines public confidence, and risks causing public embarrassment to the individuals being promoted. Editors with a COI, including paid editors, are expected to disclose it whenever they seek to influence an affected article's content. When investigating COI editing, do not reveal the identity of editors against their wishes.

Editors discussing changes to this guideline should disclose whether they have been paid to edit Wikipedia. Conflict of interest. The presence of a conflict of interest is independent of the occurrence of impropriety.

Therefore, a conflict of interest can be discovered and voluntarily defused before any corruption occurs. A widely used definition is: "A conflict of interest is a set of circumstances that creates a risk that professional judgement or actions regarding a primary interest will be unduly influenced by a secondary interest. Emoluments Clause. No Title of Nobility shall be granted by the United States: And no Person holding any Office of Profit or Trust under them, shall, without the Consent of the Congress, accept of any present, Emolument, Office, or Title, of any kind whatever, from any King, Prince, or foreign State. 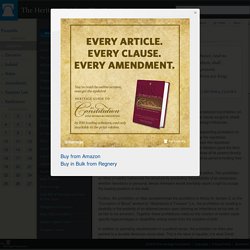 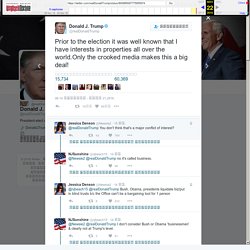 Forbes Welcome. Trump's team is talking about abolishing the FCC. This means killing the open internet. Trump used his call with the Turkish President to praise his Turkish business partner. NYT - Potential Conflicts Around the Globe for Trump, the Businessman President. Potential Pitfalls in Dual Roles On the other side of the world, Donald Trump Jr. had other projects he was pushing. 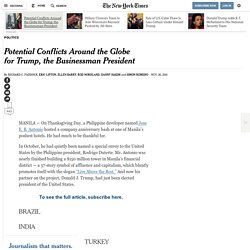 In 2012, he flew into Mumbai for a brief meeting with the state’s chief minister at that time, hoping to salvage a residential tower representing the Trump Organization’s first planned project there. He was hoping the chief minister, Prithviraj Chavan, would intervene on his behalf to get the permission needed. The participants recall the meeting differently: Mr.

Trump’s partner, Harresh Mehta of Rohan Lifescapes, said development regulations had changed, leaving the project in limbo, and they hoped Mr. By the end of the meeting, in any case, it was fairly clear that the younger Mr. “He thought the name was so big, we would bend backwards to satisfy him, but that was not the case,” Mr. “The notion that a request was made by Donald Jr. to waive any regulations is absolutely false,” Mr. Where was all this "deep-dive" before the election—even as these outlets spent so much time on trivia in Wikileaks hacks & other innuendo? WNL Op Zondag 27 nov 2016 - Charles Groenhuijsen over conflicts of interests. De Nederlandse Publieke Omroep maakt gebruik van cookies. 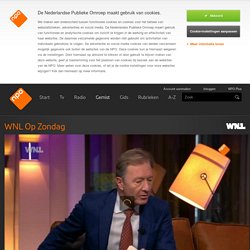 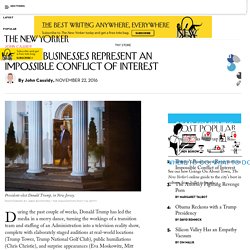 Meanwhile, Trump has said next to nothing about one of the most pressing questions he faces: What does he intend to do with his far-flung business interests and the glaring conflicts of interest they potentially represent? On Monday, the issue came into public view when an Argentine journalist reported that Trump, during a courtesy call last week with Argentina’s President, Mauricio Macri, had asked the Latin American leader to help facilitate the construction of a Trump Tower in Buenos Aires. ‘A recipe for scandal’: Trump conflicts of interest point to constitutional crisis. Constitutional lawyers and White House ethics counsellors from Democratic and Republican administrations have warned Donald Trump his presidency might be blocked by the electoral college if he does not give up ownership of at least some of his business empire. 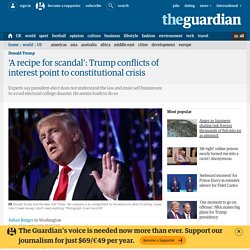 “The brand is certainly a hotter brand than it was before,” Donald Trump told the New York Times on Wednesday, and his election victory buzz does indeed seem to have been good for business. Since the surprise outcome of the 8 November vote, foreign diplomats have been flocking to the newest Trump hotel in Washington to hear sales pitches about the business and vie to book their delegations into its rooms overlooking Pennsylvania Avenue for the inauguration on 20 January. Trump, meanwhile, used a meeting with a delegation of Brexit activists including his closest British ally, Nigel Farage, to urge them to oppose wind farms which he felt would spoil the view from one of his Scottish golf courses. ‘There’s never been a case like this’ ‘A recipe for scandal’: Trump conflicts of interest point to constitutional crisis. I will be holding a major news conference in New York City with my children on December 15 to discuss the fact that I will be leaving my ... Great business in total in order to fully focus on running the country in order to MAKE AMERICA GREAT AGAIN! While I am not mandated to ....

Do this under the law, I feel it is visually important, as President, to in no way have a conflict of interest with my various businesses.. Hence, legal documents are being crafted which take me completely out of business operations. The Presidency is a far more important task! US ethics office: 'We seem to have lost contact' with Trump Team since election. US ethics office struggled to gain access to Trump Team, emails show.

The office tasked with overseeing ethics and conflicts in the federal government struggled to gain access to leaders of the Trump transition team, and warned Trump aides about making decisions on nominees or blind trusts without ethics guidance, according to new emails obtained by MSNBC. 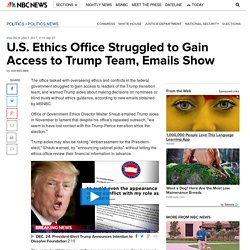 Office of Government Ethics Director Walter Shaub emailed Trump aides in November to lament that despite his office's repeated outreach, "we seem to have lost contact with the Trump-Pence transition since the election. " Trump aides may also be risking "embarrassment for the President-elect," Shaub warned, by "announcing cabinet picks" without letting the ethics office review their financial information in advance. The perils for White House staff were even more severe, Shaub argued, because they might begin their jobs without crucial ethics guidance, raising a risk of inadvertently breaking federal rules.

Fact-checking what Donald Trump’s lawyer said about the president-elect’s finances. (Don Emmert/Agence France-Presse via Getty Images) Sheri Dillon, an attorney for President-elect Donald Trump, spoke at length during the Jan. 11 news conference — his first one in six months — to explain the incoming administration’s plans to detach itself from the Trump family business. 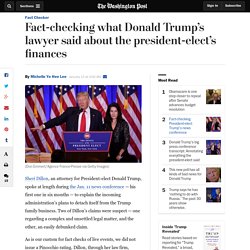 Two of Dillon’s claims were suspect — one regarding a complex and unsettled legal matter, and the other, an easily debunked claim. As is our custom for fact checks of live events, we did not issue a Pinocchio rating. Dillon, through her law firm, declined to comment, and the Trump transition team did not respond to our inquiry. Remarks of Office of Government Ethics Director Walter M. Shaub Jr. Scherpe kritiek ethiekbureau op zakenplannen Trump. "Tillerson weet dat het geld kost om het algemene belang te dienen. Hoe meer macht een functionaris heeft, hoe groter de kans op belangenverstrengeling.

Spicer attacks Nordstrom for discontinuing Ivanka Trump merchandise, calls decision ‘unacceptable’ During his Wednesday press conference, White House Press Secretary Sean Spicer characterized Nordstrom’s decision to discontinue sales of Ivanka Trump-branded products as “an attack” that is “not acceptable.” Nordstrom says the decision was strictly business, but Spicer made clear he interprets the move as unfairly targeting the president’s family because of policy disagreements.

A reporter broached the topic by referring back to a tweet the president posted earlier Wednesday attacking Nordstrom (the message was later retweeted by the official @POTUS account): During Wednesday’s presser, a reporter asked Spicer how the president is making decisions about when it’s appropriate to tweet about his kids’ business interests. But Spicer rejected the premise that Nordstrom’s decision had anything to do with business in the first place.

“I think this was less about his family business than an attack on his daughter,” Spicer said. Spicer: Nordstrom dropping Ivanka Trump's line is "direct attack" on prez. Mar-a-Lago, President Trump’s members-only "weekend White House," appears to be unprecedented in American history. NYT Sun, Sand and Influence: For Mar-a-Lago Members, Proximity Is Power. Report: Trump Picks Jared Kushner’s Friend Reed Cordish as Assistant. (JTA) — A Jewish real estate developer who is friends with Jared Kushner reportedly is joining Donald Trump’s administration as assistant to the president. Reed Cordish, a partner at his family’s real estate and entertainment firm, The Cordish Companies, co-hosted a fundraiser for Trump’s presidential campaign in October, according to Jewish Insider, which first reported on Cordish joining the Trump administration.

Ivanka Trump Will Become an Official Federal Employee. Andrew Harrer/CNP/ZUMA Amid mounting ethical concerns about Ivanka Trump's already central role in her father's administration, the first daughter made this announcement today: She will become an official federal government employee, specifically a "special assistant" to President Donald Trump. The New York Times reports the decision to take the unpaid position stems from questions over her original role as an informal adviser. Ivanka Trump changes plans, becomes federal employee. WASHINGTON — Ivanka Trump is making it official after all. President Trump’s oldest daughter — and a longtime confidant who already had an office in the West Wing — has decided to officially become a government employee.

The move comes after experts raised concerns about potential conflicts of interest between her work in the private sector, including her clothing company, and her expanding role at the White House. “I have heard the concerns some have with my advising the President in my personal capacity while voluntarily complying with all ethics rules, and I will instead serve as an unpaid employee in the White House office, subject to all of the same rules as other federal employees,” she said in a statement Wednesday. Assistant to POTUS models in an ad for POTUS's new Tower in Manila. President of Philippines just got WH invite. Another Trump conflict of interest.